The supply of legal cannabis in California promises to start drying up by spring unless a quick fix becomes law.

Right now, thousands of farms operate under temporary licenses from the California Department of Food and Agriculture (CDFA). Those 6,924 temp licenses are expiring faster than the CDFA can issue permanent annual licenses. Those temp licenses also can’t be extended unless existing law is tweaked.

It’s been 834 days since California voters approved cannabis legalization in November 2016. So far, the CDFA has issued just nine annual cannabis farm licenses. Another 39 annual farm licenses are pending payment of fees as high as $44,000 per license.

Industry expert and cannabis attorney Omar Figueroa said that without legal farm licenses, there is no legal industry. Meanwhile, the state’s illicit market continues to thrive.

“If California runs out of regulated cannabis, consumers will turn to the unregulated market, making it even more difficult for the few remaining licensed cannabis businesses to eke out a living,” Figueroa said.

“The world’s largest legal cannabis industry is on the verge of collapse,” said Lauren Mendelsohn, an associate at Figueroa’s law offices.

The author of SB 67 is Sen. Mike McGuire, who represents many cannabis farmers north of San Francisco.

Why a Fix Is Needed

There’s no shortage of unlicensed cannabis inside California, of course. It’s the legal cannabis system that may run dry.

The number one thing slowing down farm licensing is environmental review, CDFA Director Richard Parrott said on Jan. 29. For example, cannabis is the only type of crop subject to the state’s toughest-in-class environmental law, the California Environmental Quality Act (CEQA).

Leafly asked the CDFA to provide a statement on the pace of licensing, and asked if the CDFA is meeting internal goals. The CDFA stated they are working as fast as they can, and pointed to incomplete applications as an issue.

“The top priority of CDFA’s CalCannabis Cultivation Licensing Division is to process as quickly as possible the annual cannabis cultivation licensing applications,” stated Rebecca Foree, CDFA communications manager. “We are here to help applicants understand how to submit accurate and complete applications, which in turn will help speed up the application-review process.”

“The current state of affairs is worrisome to say the least,” she said. “It isn’t just an issue of whether or not CDFA can power through that many applications in the time allotted, it’s whether the applications are even eligible for approval.”

A Feb. 20 memo from cannabis industry lobbyists at K Street Consulting states that the cannabis farm industry has failed to to do their homework and turn in completed applications on time.

“The industry is not holding up their end of the bargain in submitting annual applications for their temporary licenses,” K Street stated.

The CDFA may be open to a legal fix that buys both sides time, said Price.

“In speaking to a lead scientist from CDFA last week about this looming issue he assured me that Gov. Newsom is highly motivated to see the cannabis regulatory program to succeed. He also alluded to potential legislative fixes in the works,” she said. 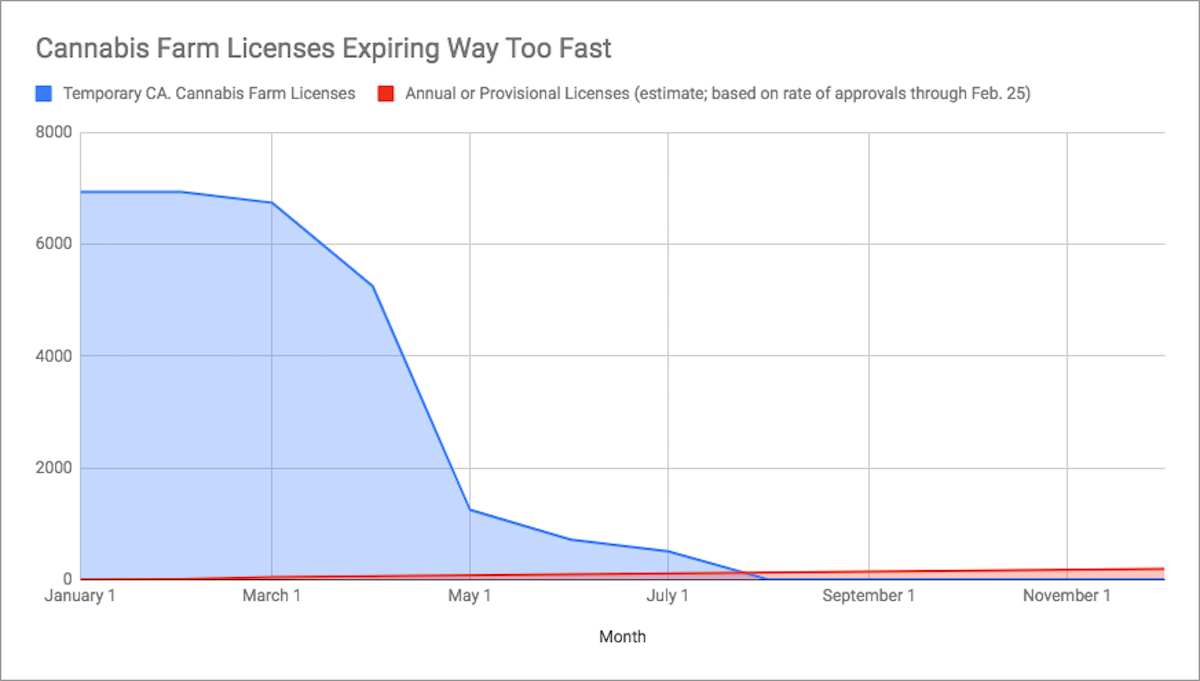 If the cannabis industry is an airplane, a critical warning light is now flashing and a switch needs to be flipped fast (SB 67), or the plane will run out of fuel (raw cannabis) and crash by summer, said Hezekiah Allen, former executive director of the California Grower’s Association.

“SB 67 isn’t the solution to all of this, but it is critical if the fledgling market is going to survive the next year,” he said.

California is on pace to have maybe 144 fully licensed farms by July, when all temporary licenses will have expired.

By contrast, Californians consume an estimated 640 metric tons of cannabis per year. That’s about 1.4 million pounds.

The rate of temporary license expiration is accelerating, and if it continues, the industry will collapse. Virtually all current legal farms won’t be able to grow cannabis. Distributors won’t have anything to ship. Labs will have nothing to test. Store shelves will go bare, and customers will retreat to the illicit market.

There are 6,924 temporary farm licensees on file with the CDFA. About 3,127 of them have submitted applications for annual licensing. Thirty-nine of those annual licenses are approved pending payment of fees. Nine farms have annual licenses.

Temporary licenses have started expiring. There are 198 temporary licenses expiring in the month of February. Among those temp licensees, four have submitted annuals. So 194 temp farm licenses will expire in February, no matter what.

At the CDFA’s current pace of 48 annual licenses approved since Jan. 1, regulators are on track to license maybe double that number (144 total) by July.

An industry with more than 6,000 temp farm licenses will have contracted to one with maybe 144 permanent farm licenses.