(Simon002, gabrieleckert/iStock)
In a shocking reversal of fortune, the Denver initiative that would make the city the first in the country to decriminalize psilocybin mushrooms picked up a wave of late ballots and is now leading.

A number of media outlets, including Leafly, had called the election a defeat for Ordinance 301. The tally was trending 52% to 48% against decriminalization late Tuesday night and early Wednesday morning. But a flurry of late voters, who tend to skew younger, appears to be putting the measure over the top.

Results still need to be certified. And we’ve been wrong before. So we’re not saying it’s over just yet.

The measure was losing, 52% to 48%, late Tuesday night. Late ballots have swung it to 50.56% in favor of decriminalization.

The measure would decriminalize possession and use of the drug—which remains classified as a Schedule I substance by the U.S. government—within city limits, which advocates say would open up the potential health benefits of hallucinogenics.

Regardless of the final tally, advocates remained upbeat and said the close results showed momentum for a nationwide movement to legalize hallucinogenics. 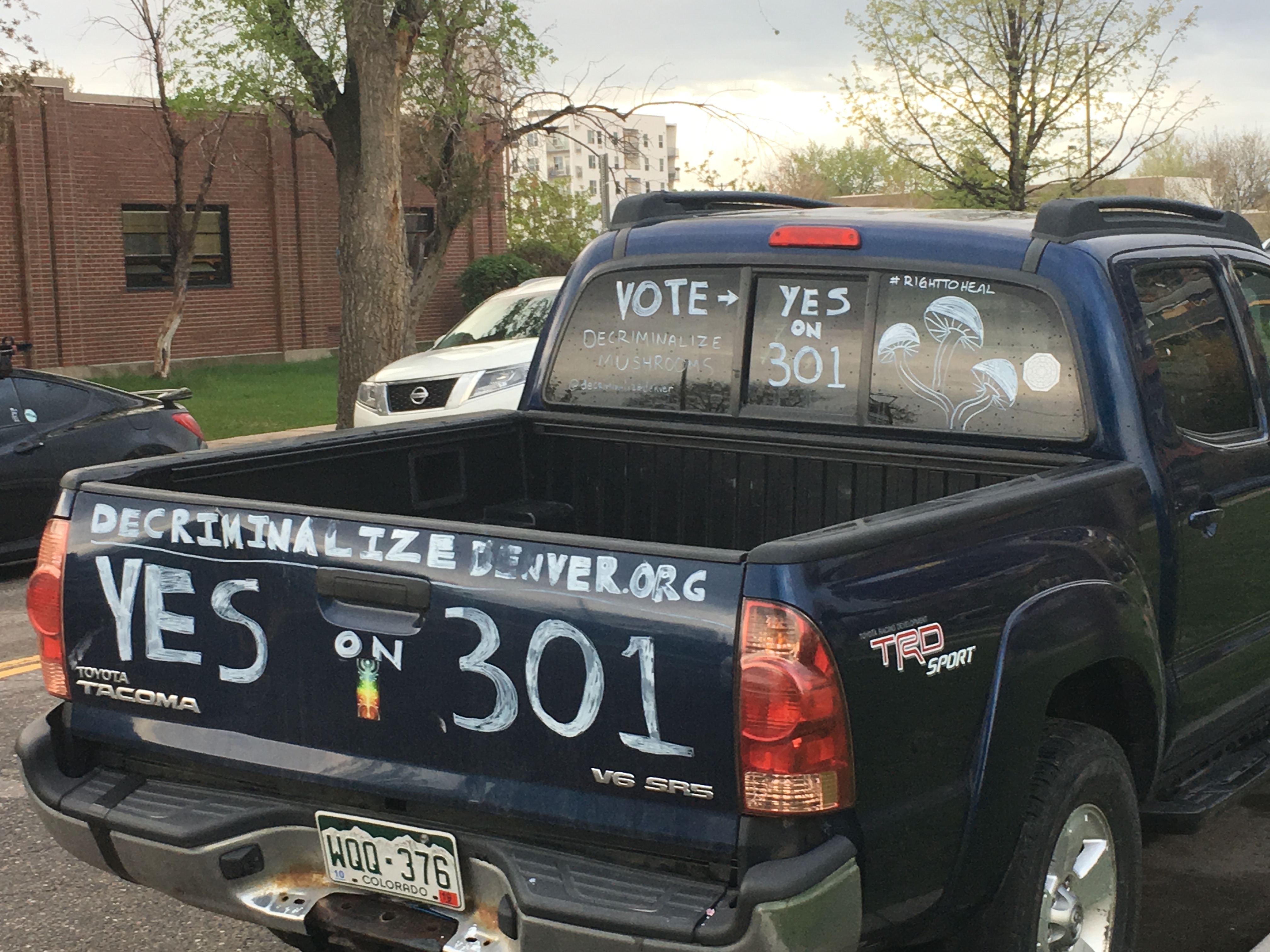 A decriminalization supporter worked to get out the vote on Tuesday. (Jason Plautz for Leafly)

Kevin Matthews, a stay-at-home dad and campaign manager for Decriminalize Denver, the campaign for Initiative 301, spoke to supporters just after results poured in on Tuesday evening and offered an optimistic message. “This is not over yet,” he said—and he was right.

“We all know that this goes way beyond Denver,” he added. “Right now this thing is a coast-to-coast movement.”

Other Cities Take Up the Cause

Matthews spoke to a crowd of more than 100 supporters at Decriminalize Denver’s election night watch party hosted in an artsy events space that fills a former synagogue in the city’s West Colfax neighborhood. In keeping with the initiative, a screen alternately displayed ballot results and a trippy, swirling pattern. An artist in the corner painted psychedelic art, and a six-foot-tall neon light Flower of Life vortex shone in the corner.

Following Denver’s vote, other progressive cities will address the issue. Advocates in Oakland, CA, are working on their own psychedelic decriminalization ballot measure, and a campaign in Oregon seeks to put a magic mushroom measure before voters in the 2020 election.

Supporters were hopeful that Denver, which became the first city to decriminalize cannabis in 2005, could be the standard bearer for hallucinogenic legalization as well. The 2005 vote eventually led to the state legalizing recreational marijuana seven years later, setting off a wave of legalization across the country. 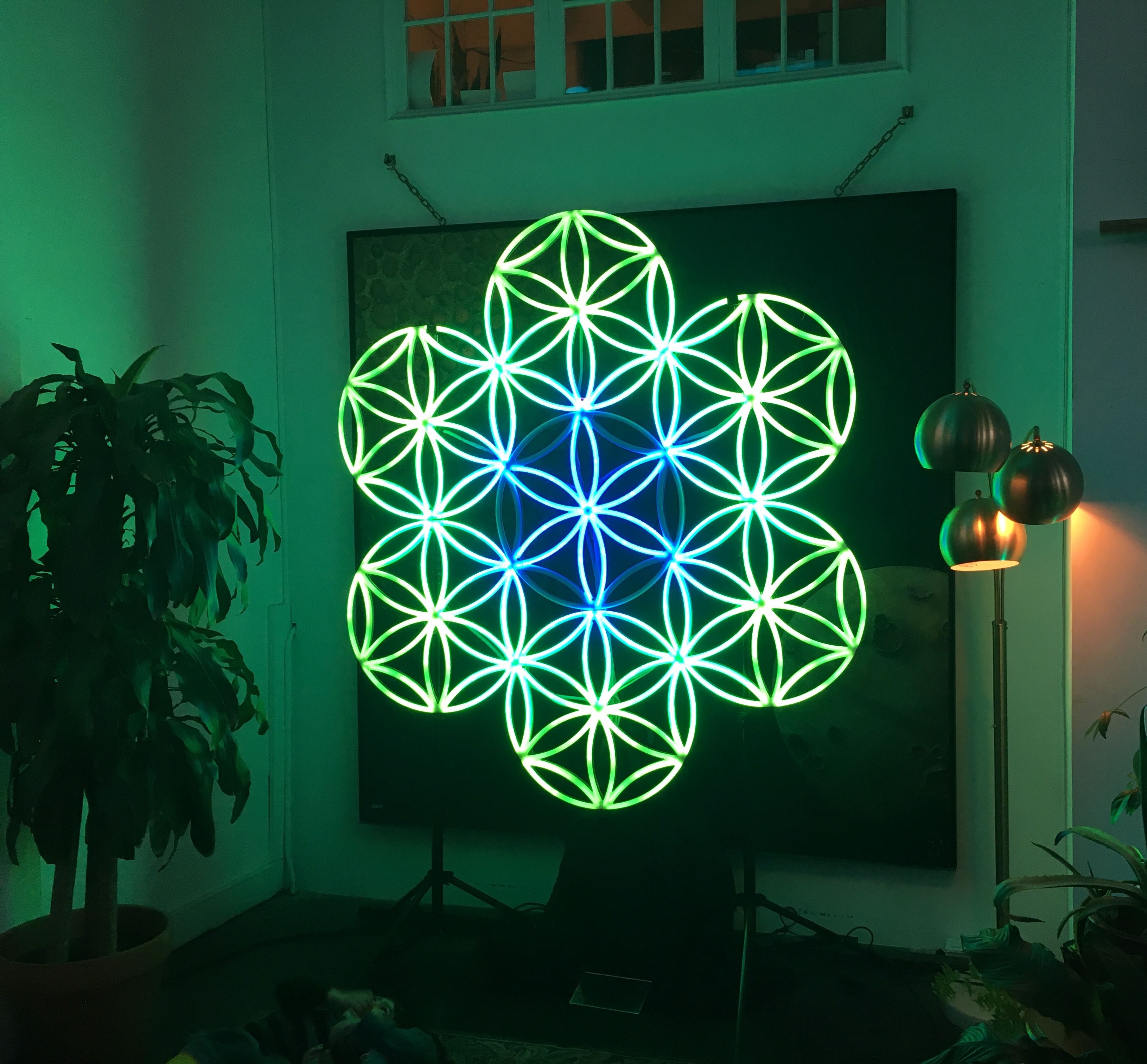 Reached a Lot of People

D.J. Reetz, a volunteer with the 301 campaign, said the campaign had elevated the profile of mushrooms. Knocking on doors, he said, he had talked up the health benefits of psilocybin to people who had never heard of the drug before.

“I don’t know what the cure for the sickness in our society is, if it’s not psilocybin,” Reetz said.

Joey Gallagher, the president of the Denver-based Psychedelic Club said the campaign showed that supporting hallucinogenics is a big tent effort, especially as more people realize the health benefits.

“We’ve got military veterans at the forefront, along with the hippies,” Gallagher said. “You’re not going to find a more passionate community. If mushrooms saved one person from suicide, they’re going to advocate for them for life.” 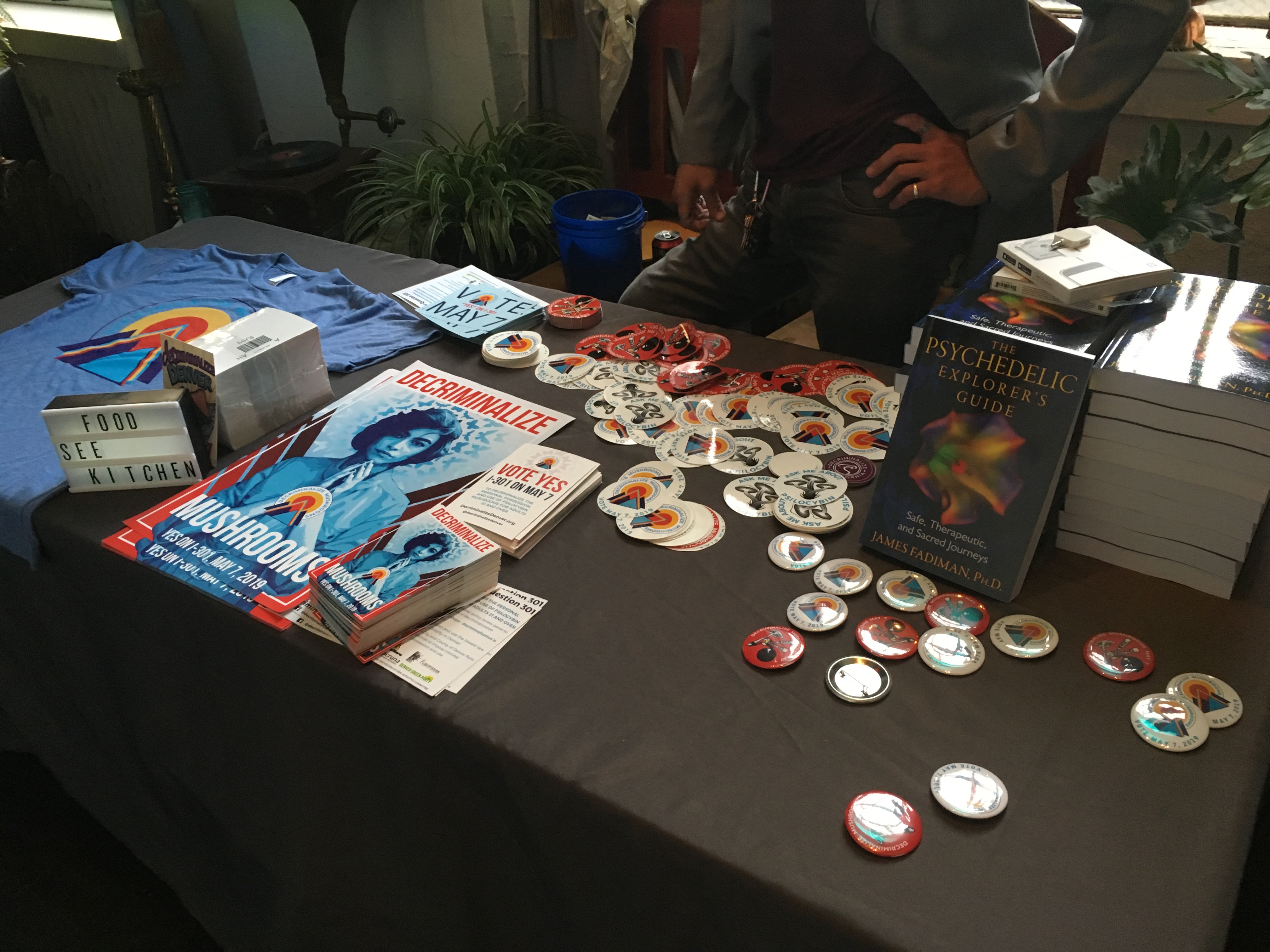 Cool poster, but not enough votes: Merch and lit on display at the Decriminalize Denver party. (Jason Plautz for Leafly)

Jeff Shipley, a Republican state legislator from Iowa, was in Denver to lend his support to what he called a “once-in-a-generation” election. Shipley has introduced two bills in his state to decriminalize mushrooms and while he acknowledge it was an uphill climb there (“In Iowa, fuck no”), the strong showing in Denver showed the issue was “on the public consciousness.”
“The citizens of Denver have ever right, nay a responsibility, to chart their own destiny … even if it conflicts with federal law,” Shipley said. “This conversation’s not going away.”
Share
Share on Twitter   Share on Facebook
Print
Denver 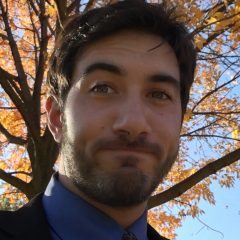 Jason Plautz is an award-winning journalist based in Denver, covering the environment, politics, and the intersection of the two.