Did Past Harassment Allegations Finally Catch Up To MPP’s Rob Kampia?

Tuesday morning’s announcement by the Marijuana Policy Project caught many in the cannabis legalization community by surprise. MPP officials said that Rob Kampia, the group’s co-founder and longtime director, would step down from his day-to-day management role and become a kind of emeritus development director.

The timing of Rob Kampia's leaving was odd. So were the stories about his behavior seven years ago.

The timing—two days before the long Thanksgiving holiday—was odd, to say the least. As was the official explanation.

“Shortly after Election Day, Rob quickly shifted gears in December to start the Michigan 2018 legalization campaign,” MPP board member Troy Dayton said in a media statement. “With the Michigan signature drive now complete, it is the right time to shift Rob’s focus to new and bigger projects.”

Fair enough. But…the completion of a state legalization petition drive is not exactly a career capstone for a leader of Kampia’s stature. This is the guy whose group organized and helped bankroll the world-changing Amendment 64 campaign, which legalized adult-use cannabis in Colorado.

It’s impossible to ignore the fact that Kampia’s soft departure comes in the midst of America’s public reckoning with sexual harassment. The #MeToo movement that began with the exposure of Harvey Weinstein has now swept up and sidelined the careers of Kevin Spacey, James Toback, Louis C.K., Brett Ratner, Leon Weiseltier, Charlie Rose… I could go on. It’s not too far a leap to wonder whether the MPP board of directors saw the writing on the wall and decided to end Kampia’s tenure before his past behavior ended it for him.

A five-second Google search of Kampia and “sexual harassment” turns up major media hits from January 2010, when Amanda Hess wrote a cover story on Kampia for Washington DC’s City Paper. Seven years before Jodi Kantor and Megan Twohey exposed Weinstein in the New York Times, Hess (who now works for the Times as well) chronicled a number of allegations against Kampia in the City Paper.

For 15 years, Rob Kampia has served as executive director of the Marijuana Policy Project (MPP), a nonprofit group dedicated to the reform of marijuana laws. In that capacity, Kampia, 41, has pursued two goals. One is the steady advancement of the organization, which he founded out of his Adams Morgan home in 1995. And the other is cultivating an office environment suited to his sexual appetite. A brief inventory of Kampia’s knack for mixing business with pleasure:

An Incident, a Three-Month Leave 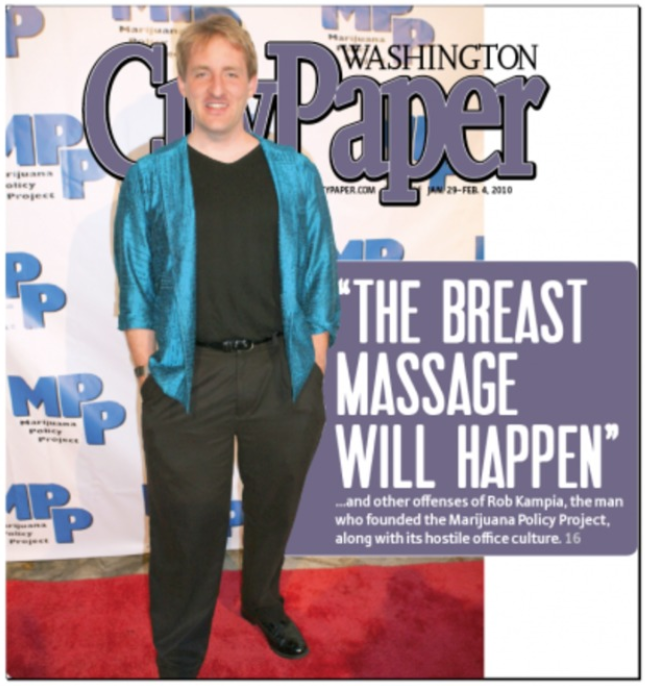 Shortly before the story’s publication, Kampia announced that he was taking a three-month leave of absence to undergo therapy. “I just think I’m hypersexualized,” he told the Washington Post.

That time away was sparked by an incident the previous August that involved a female subordinate. The incident so upset MPP staff members that four resigned immediately and three others left soon after.

Some staffers described it as a final straw after years of witnessing Kampia’s “predatory behavior” in the office, said former membership director Salem Pearce. “He was known as someone who made crude and inappropriate comments about and to women,” she said. “The number-one perk for Rob about MPP was the access to young women.” Pearce was one of the women who resigned because she was convinced that Kampia and MPP’s board were not going to address the matter. “I realized Rob was more interested in keeping his job than the good of the organization,” she said.

In that same Post column, Kampia said his past behavior was just that: a thing of the past. “I wasn’t nearly careful enough in considering other people’s feelings with my actions and my language,” he told Roberts and Argetsinger. “I’ve also learned that I’m capable of change because, overnight, we changed the culture of MPP.”

I know nothing about the culture of MPP that emerged after Kampia’s three-month therapy leave. It may well have changed for the better. Kampia may have become a better leader and a better man. I hope he did.

Morgan Fox, MPP’s communications director, sent this message to me on Wednesday morning:

“The decision to change leadership was due to MPP growing as an organization, as the drug policy reform movement grows and evolves. With the changing legislative landscape and our steadily increasing responsibilities, Rob and the board determined that his time would be best spent focused on strategic development and fundraising.

This sort of thing is happening throughout the drug policy reform movement and is simply indicative of our collective success and momentum.

Since the incident referred to in the City Paper article, there have been no allegations of inappropriate behavior against Rob or anyone else at MPP that I’m aware of. MPP is a workplace based on respect and professionalism, and we strive to continue to live up to this standard.”

Since 2010, MPP has instituted a comprehensive harassment policy, and women now occupy a number of leadership roles within the organization, including chief of staff and director of state policies. 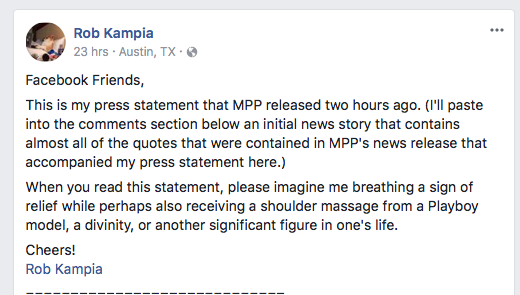 Look, I’m completely open to the idea that MPP cleaned up its act and became a better, safer workspace. The interactions I’ve had with officials there have always been professional, and I admire and am grateful for the work they’ve done over the years. But the optics here, on Kampia’s own Facebook post, are terrible. “Please imagine me breathing a sigh of relief while perhaps also receiving a shoulder massage from a Playboy model…”? Come on, man.

One thing is clear: If the 2010 Post and City Paper articles had come out in November 2017, Rob Kampia would not be enjoying a soft landing as the Marijuana Policy Project’s development director. His career would be going the way of Weinstein, Spacey, Rose, et al.

Many in the cannabis industry are waiting for a big #MeToo shoe to drop.

I truly hope that the luck of timing gave Rob Kampia a second chance that he took and made the most of. The shitty thing is, we can see what Kampia did over the next seven years as he led one of the nation’s most visible legalization groups. The people we can’t see are all the young women who might be leading MPP today, but who left the organization rather than put up with a predatory workplace.

This may be the first of a number of stories to come. Not necessarily about Kampia, but about others in the cannabis space. For the past week, many people in the industry have been waiting for a big shoe to drop, and it may land any day now. Call it what you want—the #MeToo movement, the Weinstein effect, America’s sexual harassment reckoning. It started in Hollywood and politics, but it’s coming to the cannabis industry too.