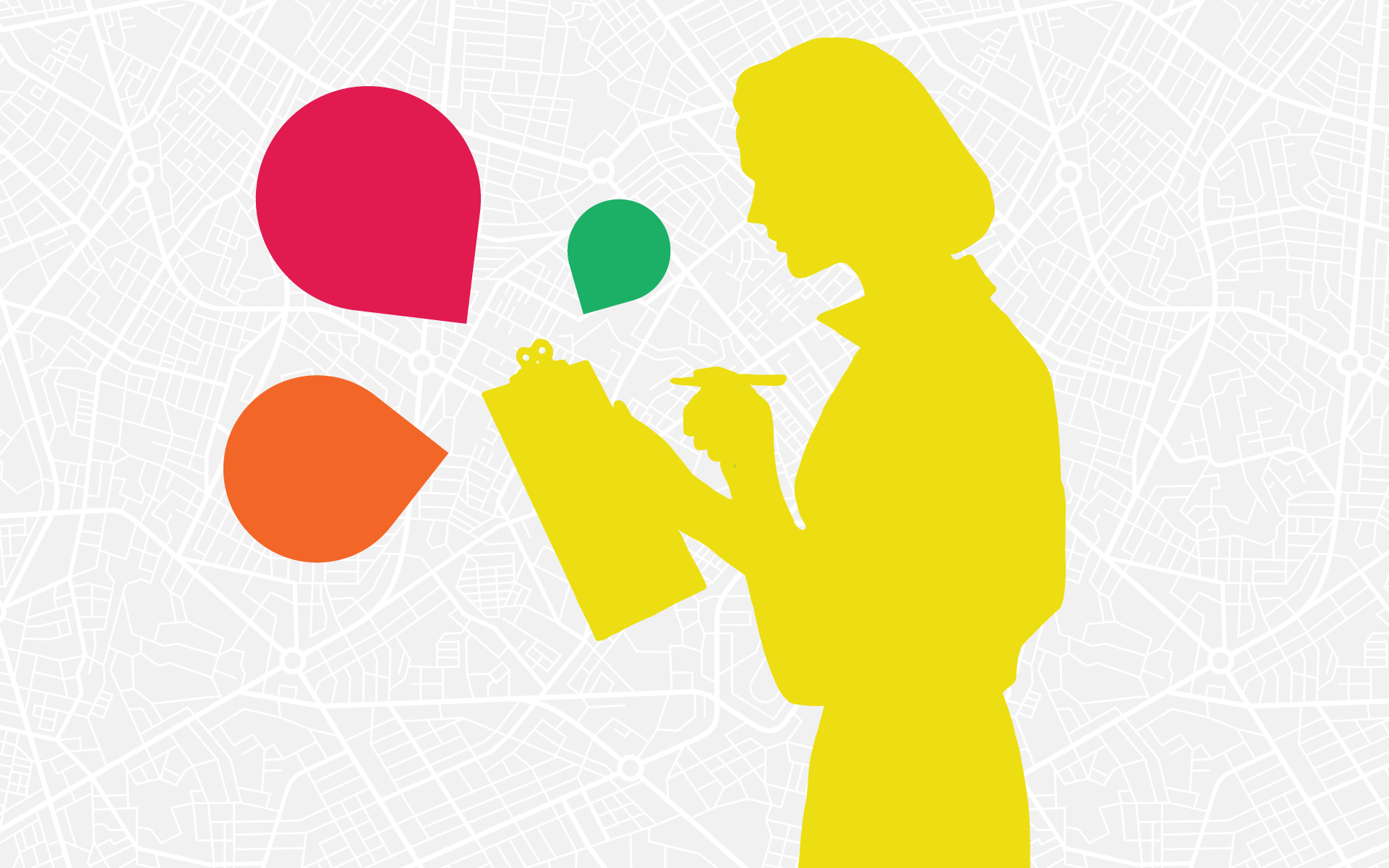 The world’s leading medical cannabis patient advocacy group, Americans for Safe Access (ASA), reports that residents of the Pacific island territory of Guam have better options to treat chronic pain and other ailments than their fellow Americans in Texas and the Southeast. That’s according to ASA’s 2019 State of the States Report, an annual evaluation published recently.

ASA aims the report at lawmakers each year, prodding them to make progress relative to their neighbors. Each US state and territory gets a grade, yielding an annual map of unequal protection for 126 million Americans with chronic pain, which is cannabis’ number one qualifying condition.

On the positive side, we’re seeing medical cannabis deployed against the opioid epidemic in Illinois (A-), New York (B-), and California (B+). Oklahoma, Ohio, and Florida all made heartening progress—two Bs and a C (up from Fs in 2015).

That contrasts with the frustrating stasis happening in Texas and throughout the Southeast—all of which got Fs. Guam got a C, by the way. 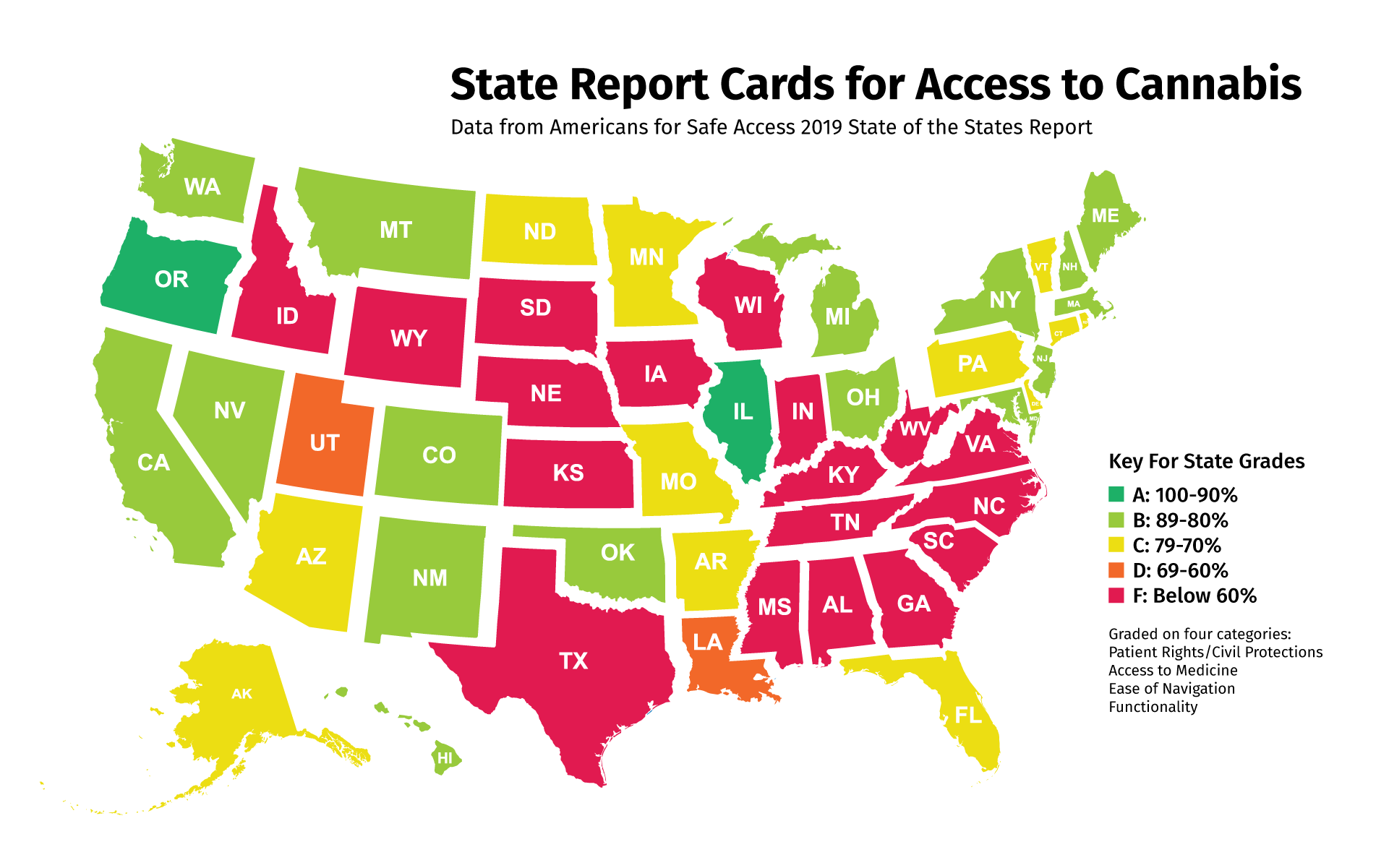 ASA’s point-based grading system gave out the organization’s first-ever A minuses to Oregon and Illinois this year. Opioid patients in Illinois can trade in their prescriptions and get a digital medical cannabis card—on the very same day.

“It immediately reduced the number of individuals who were turning to opioids after surgery or acute pain issues,” said David Mangone, director of government affairs at ASA. “They did not have to undergo a trial-and-error period with dangerous opioids and run the risk of addiction.”

“We certainly applaud Illinois for those efforts and hope they are modeled around the country,” Mangone said.

US Cannabis Cost Is Too Dang High

The 2019 report included first-ever points awarded for patient feedback. A 500-patient US survey revealed 88.5% of respondents believe that in some way their medical cannabis was not affordable.

“To have over 400 respondents in the survey say, ‘My program isn’t serving me well because medicine is so expensive,’ should be a red flag to state regulators and lawmakers,” Mangone said.

In California, for example, local cannabis bans and excise taxes still decrease affordability in both the medical and adult use market. “Even though this program exists, many people have to turn to the illicit market because of pricing and the incredibly high excise tax,” Mangone said. “It’s one of the chief concerns year after year.”

No health insurer in the United States covers medical cannabis, so patients must bear the entire cost of cannabis meds on their own.

And that’s strange, because 131 people die every day from opioid overdoses, among 70,237 annual prescription drug deaths in the United States in 2017. Cannabis has no risk of lethal overdose, and the National Academy of Sciences concluded in 2017 that medical marijuana worked for pain.

“Anything that reduces a tax burden or makes insurers more incentivized to cover medical cannabis is going to be tremendously helpful looking to 2020 and onward,” Mangone said.

Who knew we’d live to see the day where Ohio and Oklahoma got a B score in medical cannabis and Florida eked out a solid C—all part of a cannabinoid awakening in conservative states. ASA awards each state up to 400 total points based on patient rights, access levels, and consumer safety. Passing medical cannabis laws, implementing them, or fixing programs all boost scores.

“No state has more quickly and effectively implemented a medical cannabis program than Oklahoma,” said Mangone.

In Florida, court rulings enhanced dispensary access and product variety. Now patients can use smokable formulations of cannabis, and judges removed the licensure cap on dispensaries.

Texas legislators passed a small but critical improvement to the state’s medical cannabis program in late May, adding eight conditions that qualify patients for medical cannabis access. Prior to passing that law, intractable epilepsy was the only condition that qualified a patient for legal cannabis.

Texas’ Legislature meets just once every two years, removing the possibility of further reform at the state level until 2021. “Texas is incredibly frustrating,” said Mangone.

Again, that’s odd because medical cannabis is bipartisan—support polls at 93%. Even water doesn’t poll at 93%.

“I don’t think there’s a politician in the US in any district that polls the same way that medical cannabis does,” Mangone said.

Mangone said he’s hopeful about the possibility of change in Tennessee, South Carolina, and Georgia, where lawmakers are planning to introduce medical cannabis bills in early 2020.

“We’re really interested in breaking this stronghold in the Southeast,” he said. “It is much less of a political risk to come out and support medical cannabis [than it used to be].”