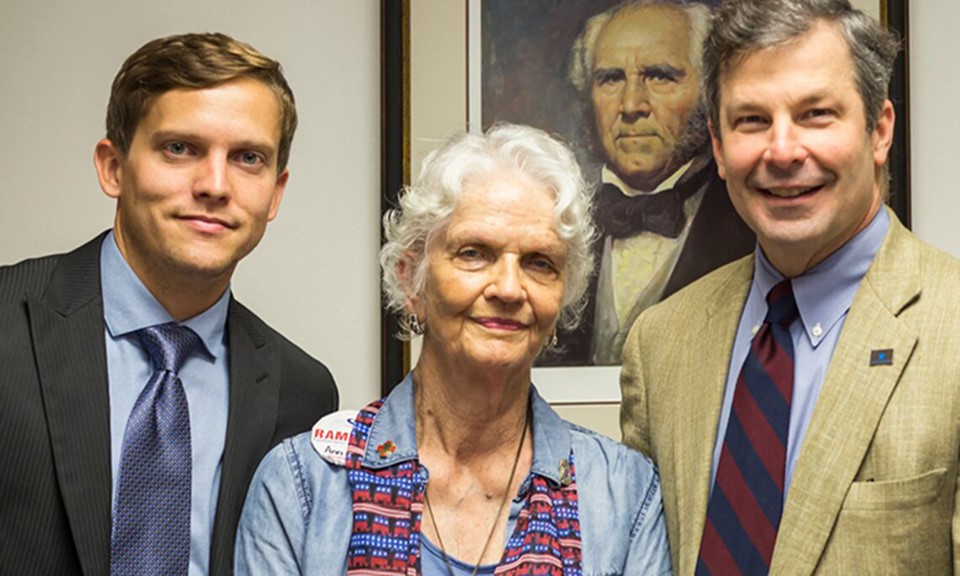 When the Republican National Convention opened in Cleveland today, one alternate party delegate was there to spread an unconventional message. Ann Lee, founder of RAMP — Republicans Against Marijuana Prohibition — is attending her first national confab since 1984, when she was a Ronald Reagan delegate. And she is bringing the legalization love strong.

“The main thing I hope I can do is just ask [conservatives] to consider if they can support prohibition and be conservative,” Lee told Leafly before heading off to Cleveland. “I don’t know why Republicans have been paying homage to this law [against marijuana], like it was handed down to us by Moses, when it was passed in 1937 as part of the New Deal. It would be funny if it wasn’t so serious.”

To understand how RAMP works, you first need to know a little about RAMP’s history. Ann Lee came around to the medical possibilities of cannabis more than a quarter-century ago, after her son Richard suffered trauma in an accident. It was 1990, and Richard’s injuries put him in a wheelchair. Several months after the accident, he told his folks that marijuana was helping him.

“If there was anything I didn’t want to hear, that was it,” Ann Lee recalled in a recent interview in Houston. “I had accepted the lies the government put out.”

“But after a lot of prayer and research, [my husband and I] realized we had been wrong, that [marijuana] was a good medicine, and that anyone who needed it should be able to get it.”

Thus began the Lee family cannabis affair that eventually led to the creation of RAMP. Lee and her husband joined the Drug Policy Forum of Texas and went out of their way to talk with researchers, including retired professors who were advocating for legalization from a purely moral standpoint, not for their own personal use.

If the name Richard Lee sounds familiar to the cannabis cognoscenti, there’s good reason. In 1997, Ann Lee’s son moved to Oakland. Ten years later he founded the renowned Oaksterdam University, which today offers cannabis classes and professional training for jobs within the legal industry. In 2010, Richard spearheaded the campaign for Proposition 19, which would have legalized cannabis in California. The measure fell short that November.

For Ann Lee, the tipping point came in 2012, shortly after she and her husband attended a five-person NORML panel and realized three of the five panelists were Republicans. The next day, she founded RAMP. “We modeled ourselves after Law Enforcement Against Prohibition,” she said.

Lee is driven by more than just her family’s firsthand experience with medical cannabis. Growing up in the Jim Crow south, Lee said, she was uncomfortable with how few Christians spoke out against racial discrimination at the time. Now that she’s an elder stateswoman, she isn’t about to ignore the moral imperative to speak out against new forms of similar injustice:

“The fact that prisons are called the new plantations and they’re filled with young blacks and young Hispanics [convicted on drug offenses that disproportionately affect people of color] — that is part of what drives me to do what I do. Because it is so wrong,” she said. “When I grew up, it was against the law for whites and blacks to go to school together. That was bad law. Bad law has got to change. When you think of the harm that has been done, the lives that have been shattered by the drug laws, it’s haunting.

"I don’t think I have a choice when I realize the injustice that has been done. If I’m going to live with myself, I have to do this.”

Lee works on many fronts. “Candidates want my endorsement when they are running,” she says. “Especially in the primary.”

In spite of her outspoken views, she says she still feels quite welcome among Republicans. “I do not find that I am ignored, shunned, or cast aside. I feel that I am a respected member of the Republican Party. They say, ‘Ann, your message has been the same the whole time. It took me a long time to come around.’”

Of course, RAMP still faces an uphill battle. When the group was denied a booth at the Republican National Convention in February, conspiracy theories abounded. The Republican Party of Texas cited no violation of its platform as explanation for refusing them a booth, instead simply asserting that a shadowy backroom committee’s ruling was final. The Republican Liberty Caucus of Texas, which supports RAMP, said it was a shame Republicans had made such a heavy-handed move.

“It is disheartening that at a time when we should be working to expand the party the party leadership has decided to start excluding a group which is mostly lead by young activists who have the good of the party at heart,” the Liberty Caucus said in a Feb. 18 statement. “The new generation of Republicans, who have grown up in the era of the failed War on Drugs, are more sympathetic to the message of compassion and tolerance which RAMP represents. We should welcome those young voters, not shut the door in their faces.”

As RAMP Communications Director Hunter White pointed out, eight RAMP members still attended the state convention as individuals, and they had an influence on the party’s plank on cannabis policy.

Because of the group’s uphill climb, they’ve learned a number of hard lessons about politics. Hunter White said the main advice he gives to people in affecting change at the state level is this: Know and talk to your state representative.

“The best that I can say to people, especially our veterans,” White said, “is that you can’t be afraid of a representative giving you pushback on it, or feeling they are going do something against you, if you say that you are in favor of legalization.”

He also suggested picking your battles wisely. Calling up a state or federal representative, or emailing them, or creating an education group, might be a more effective and less risky form of advocacy than civil disobedience. He said this is particularly true in conservative or rural areas of Southern states, where picketing for pot can land you in the clink.

“You have to make it known that you want reform,” White said. “But maybe just expressing that, getting people together to talk about it, is where it stops. You can’t do civil disobedience everywhere. Dallas NORML will do marches and won’t be stopped. But I can tell you if you tried to do the same thing in Longview [an east Texas town of 80,000, near borders with Arkansas and Louisiana] you’d be stopped, and they would not show you mercy. Do feel free to express yourself; know that you have that right. Scientific evidence is on your side. But you can’t do civil disobedience everywhere — or, if you do, you’re probably going to face consequences, though I feel that the law is unjustified.”

Yet even in places like Longview, activists aren’t all silent. Team Alexis, the family of Alexis Bortell, a patient with epilepsy responsive to daily doses of marijuana’s active ingredient, staged a rally there in May. The Bortells may be bold, but they also must bend to the law. The family moved to Colorado a year ago because they can’t legally access medical marijuana in Texas.

As for Ann Lee, she’s thrilled to be attending her second Republican National Convention in Cleveland. “I’m excited about going,” she told Leafly. “I haven’t been to a national convention since 1984. I’m sure it’s going to be busy. We keep getting emails about it. Security’s a big issue. Our bus will be checked, police escorted. In 1984 it was an entire different atmosphere. Things have changed. I’ve had my plane ticket, have a hotel reservation, I have a roommate. I want to see what I can do.”