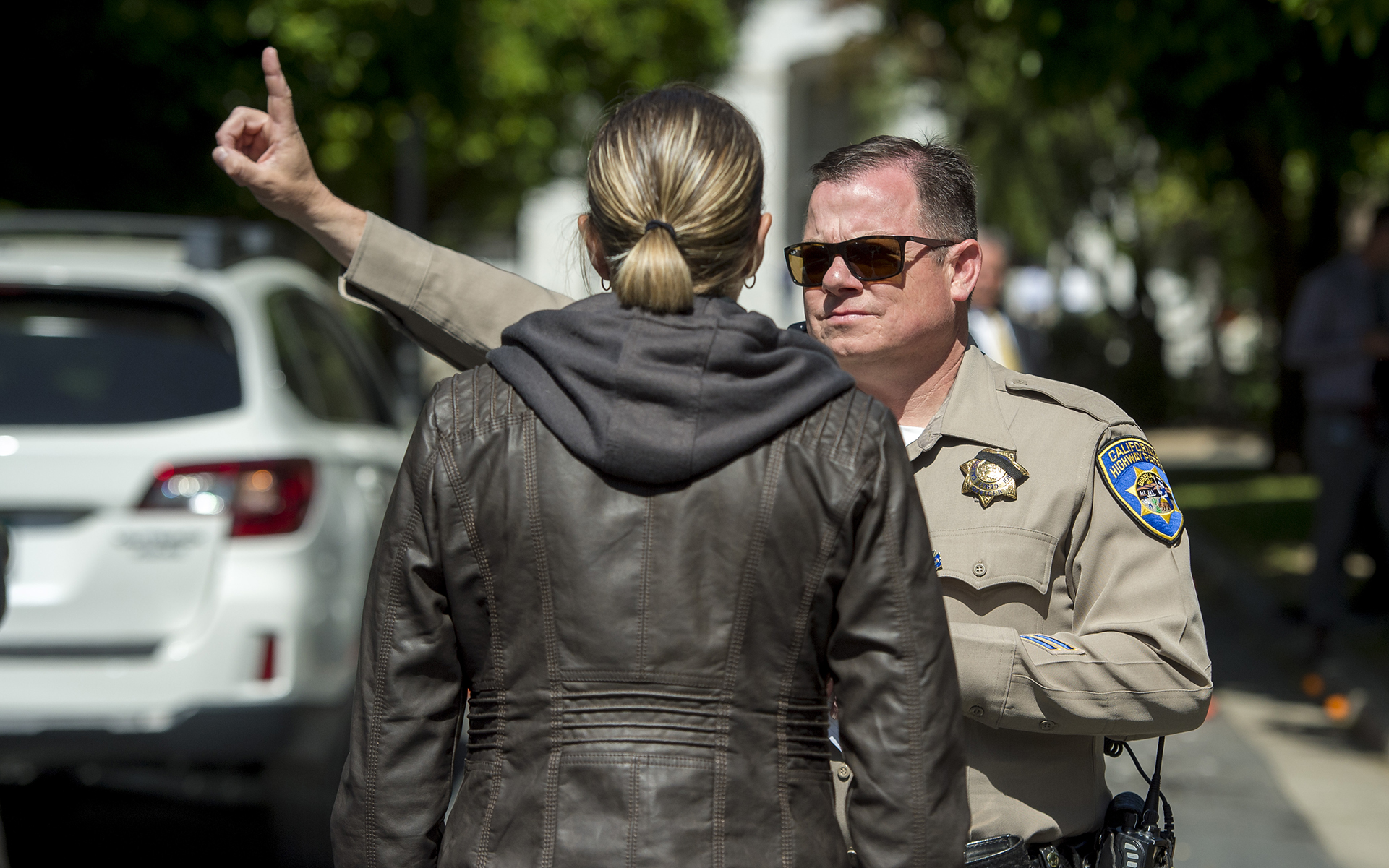 CHP officer Gary Martins conducts simulated traffic stop on Jaimi Kenyon, a CHP Sergent as members of the Highway Patrol and Sacramento Police Department simulate traffic stops involving drivers suspected of being under the influence of drugs and alcohol at the California State Capitol, Wednesday May 10, 2017. The demonstration will showed the current procedures used by law enforcement officers as well as new roadside drug testing technology that could be used in the future. Photo by photo by Brian Baer
SACRAMENTO—Back in the 1980s, the California Highway Patrol (CHP) staged annual media events at the Sears Point Raceway in Sonoma County to illustrate the dangers of drunk driving. The show usually included local celebrities who drank alcohol, drove a test course, and had their impairment evaluated.

On Wednesday, the CHP revived the old tradition and added a new twist: Instead of drunk driving, the CHP and state Sen. Tom Lackey modeled new ways of handling drugged driving. 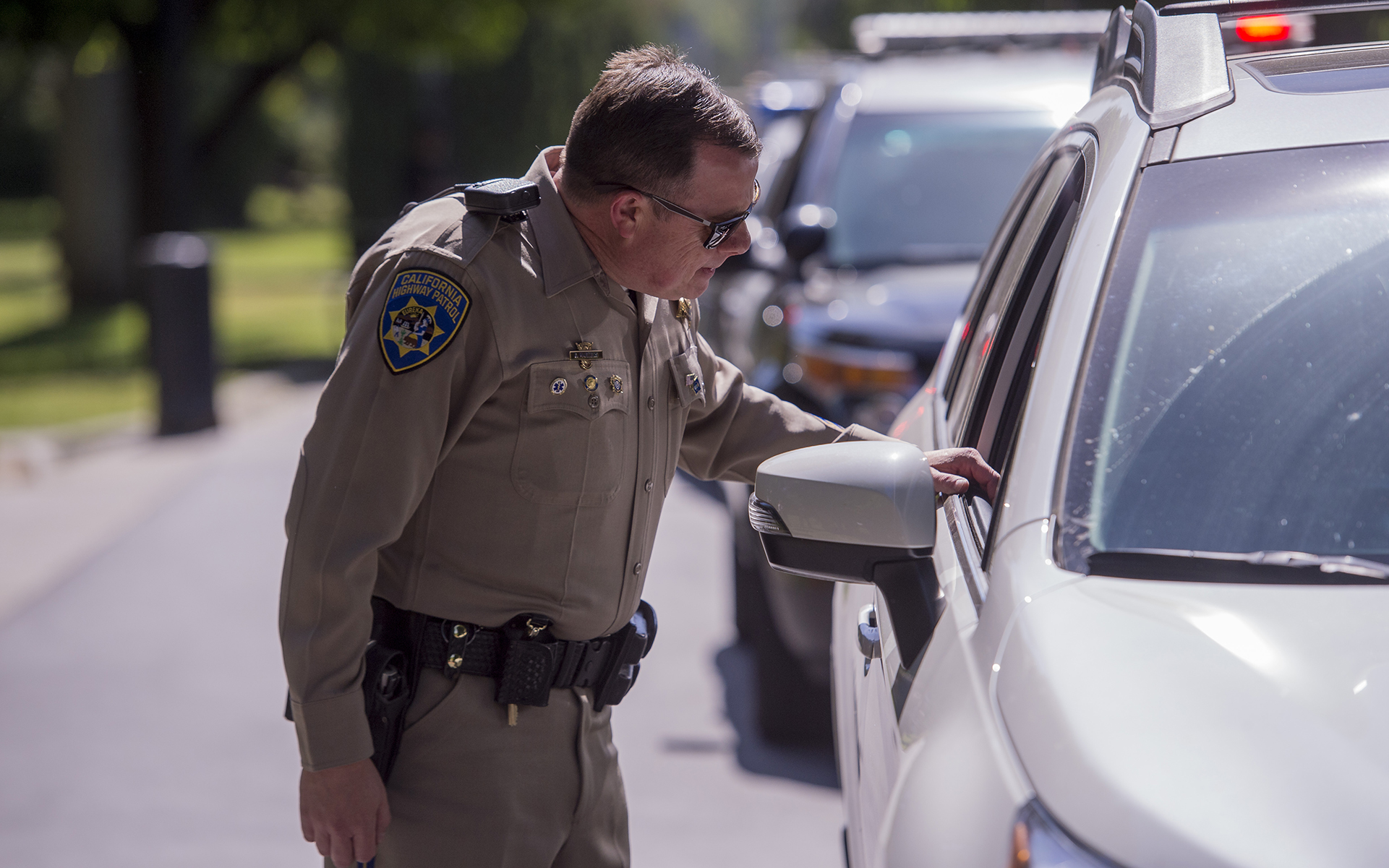 Instead, officers simulated two different traffic stops involving a potentially inebriated motorist and demonstrated the field tests and technology traffic enforcers uses to determine if motorists are driving under the influence of cannabis and other substances, both legal and illegal.

The star of the show was a device that tests drivers’ saliva and measures the presence of active THC, rather than the standard and controversial blood test that detects metabolites, residual elements that confirm cannabis consumption in the recent past but do not determine impairment. 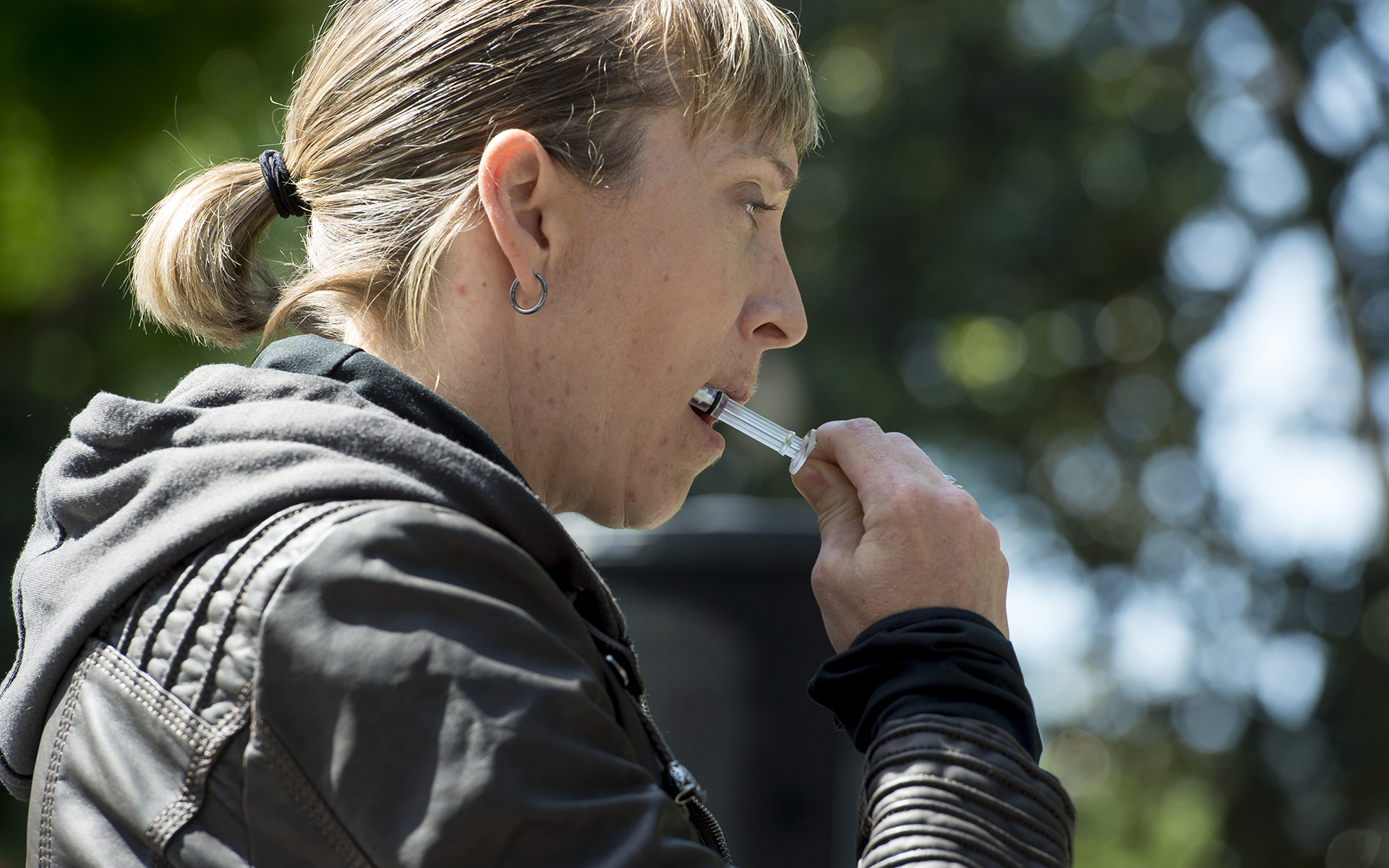 Developed by a Santa Rosa company called Alere Toxicology, the saliva-detection technology—a plastic swab stick about the size of a syringe that fits into a computerized unit resembling a hand-held credit card device—is currently deployed by the CHP in three California counties (Sacramento, Los Angeles and Kern counties) under a law sponsored by state Assemblyman Tom Lackey, the Southern California Republican who co-authored the state’s landmark medical marijuana regulation act.

A representative for Alere Toxicology said his company’s DDS2 device, priced at nearly $6,000, has a 95 percent accuracy rate, testing for cannabis, cocaine, methamphetamines, opiates and other drugs. Alere’s saliva technology has also been used in Canada.

“We want this to become used statewide,” said Lackey, who worked for the CHP for 28 years before being elected to the Legislature in 2014. “When people drive impaired they are really putting themselves and others at risk.” 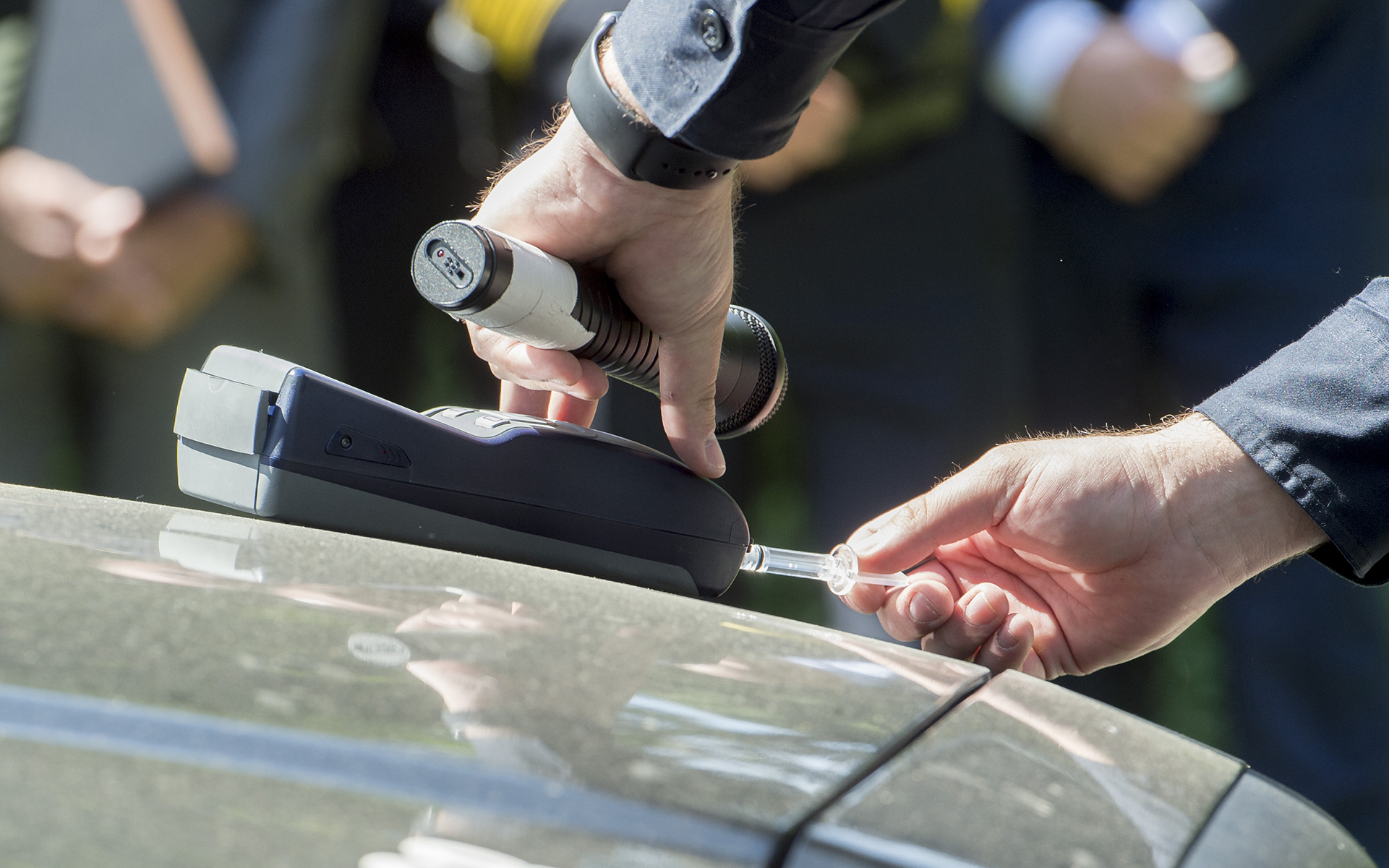 In both simulations, officers pulled up behind a late-model Subaru Outback occupied by a CHP sergeant in plain clothes posing as the driver.

Demonstrating a traffic stop in which the driver was not wearing a seatbelt, a CHP officer approached the vehicle. The officer asked the driver to exit the vehicle, then performed a standard battery of field tests used to determine impairment — making the driver follow the officer’s finger with her eyes, walking heel-to-toe, standing on one foot, and blowing into a breathalyzer to test for alcohol intoxication.

The second demonstration, simulating a traffic stop for erratic driving, featured a similar battery of cognitive and performance tests conducted by a Sacramento Police officer but ended with the CHP sergeant posing as the driver being tested for cannabis. The driver swabbed saliva from inside her mouth and handed the test stick to the police officer, who placed the stick into the Alere Toxicology DDS2 reader for testing.

For the purposes of the simulation, the saliva test registered 4 nanograms of THC in the test subject’s system. Alere’s saliva-testing technology measures for the presence of active THC, which can determine whether a person has consumed cannabis within hours of the test. More widely used blood-testing technology measures inactive metabolites, which can be detected up to 30 days after a person has consumed cannabis but do not, according to critics, provide an accurate measure of intoxication.

While California currently has no threshold for cannabis intoxication, different states have different limits (2 nanograms per milliliter of blod in Nevada and 5 ng/ml in Washington). The driver in Wednesday’s simulation was placed under mock arrest and given a separate 12-point cognition test that drivers arrested on suspicion of driving under the influence of drugs undergo at police stations. 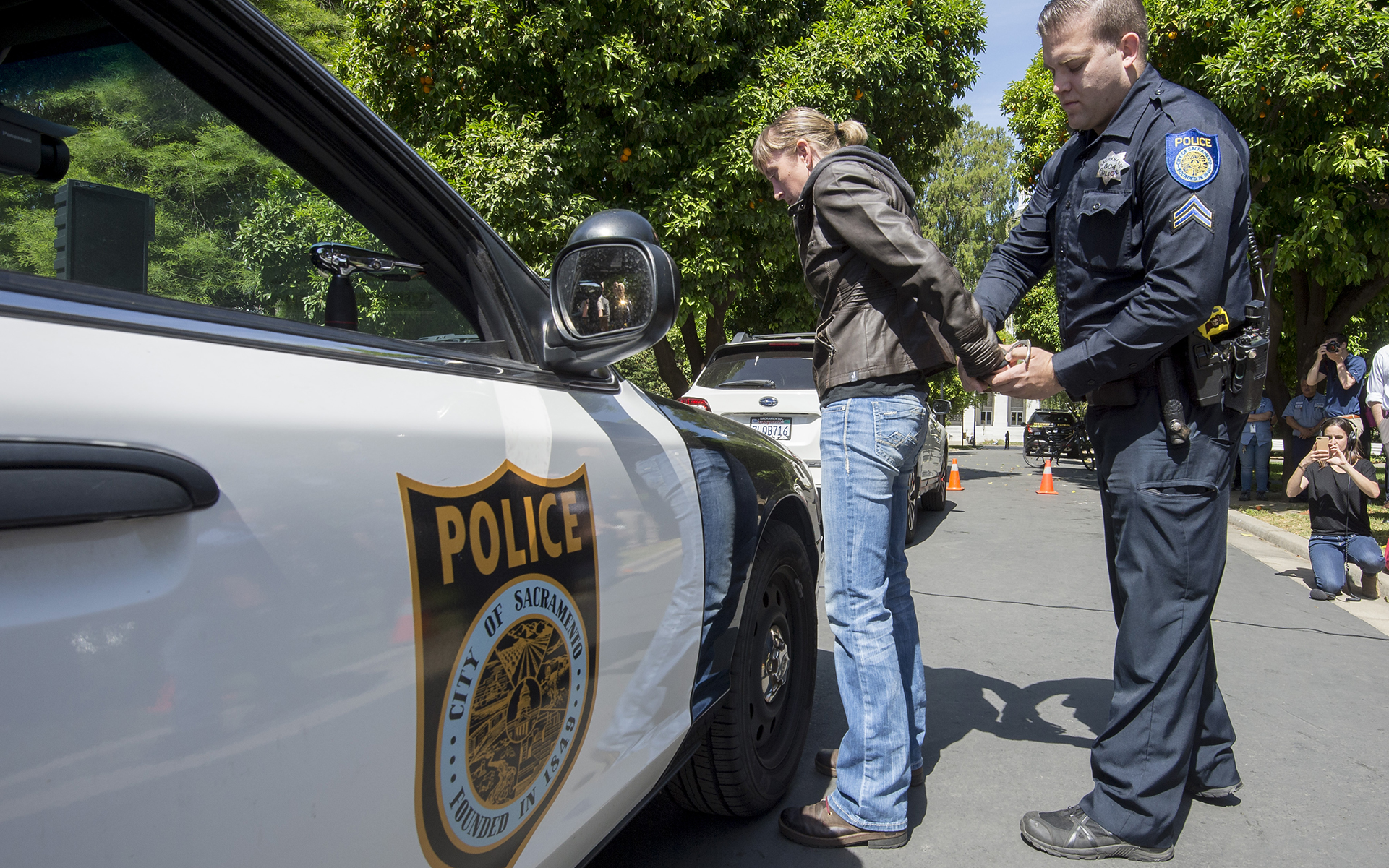 All forms of impairment testing are controversial in part because cannabis affects different people in different ways. No two people share the same tolerance limit, which makes the drug’s effect on individual driving performance difficult to calculate.

Proposition 64, the state’s recreational cannabis measure approved by voters in November, provides the California Highway Patrol with $3 million a year for four years to develop protocols to determine whether a driver is too impaired to drive. Meanwhile, Assembly Bill 6, introduced by Lackey, would form a CHP task force to examine different roadside technologies to detect drug impairment.

Lackey and law enforcement officials at Wednesday’s demonstrations stressed that the saliva swab test is optional, and that motorists suspected of driving under the influence of drugs can refuse to take the test without repercussions.

Motorists who agree to the saliva test are allowed to swab their own mouths. The CHP sergeant who posed as the suspected drugged driver in Wednesday’s simulation vigorously swabbed the inside of her mouth with the testing wand for about 10 seconds. 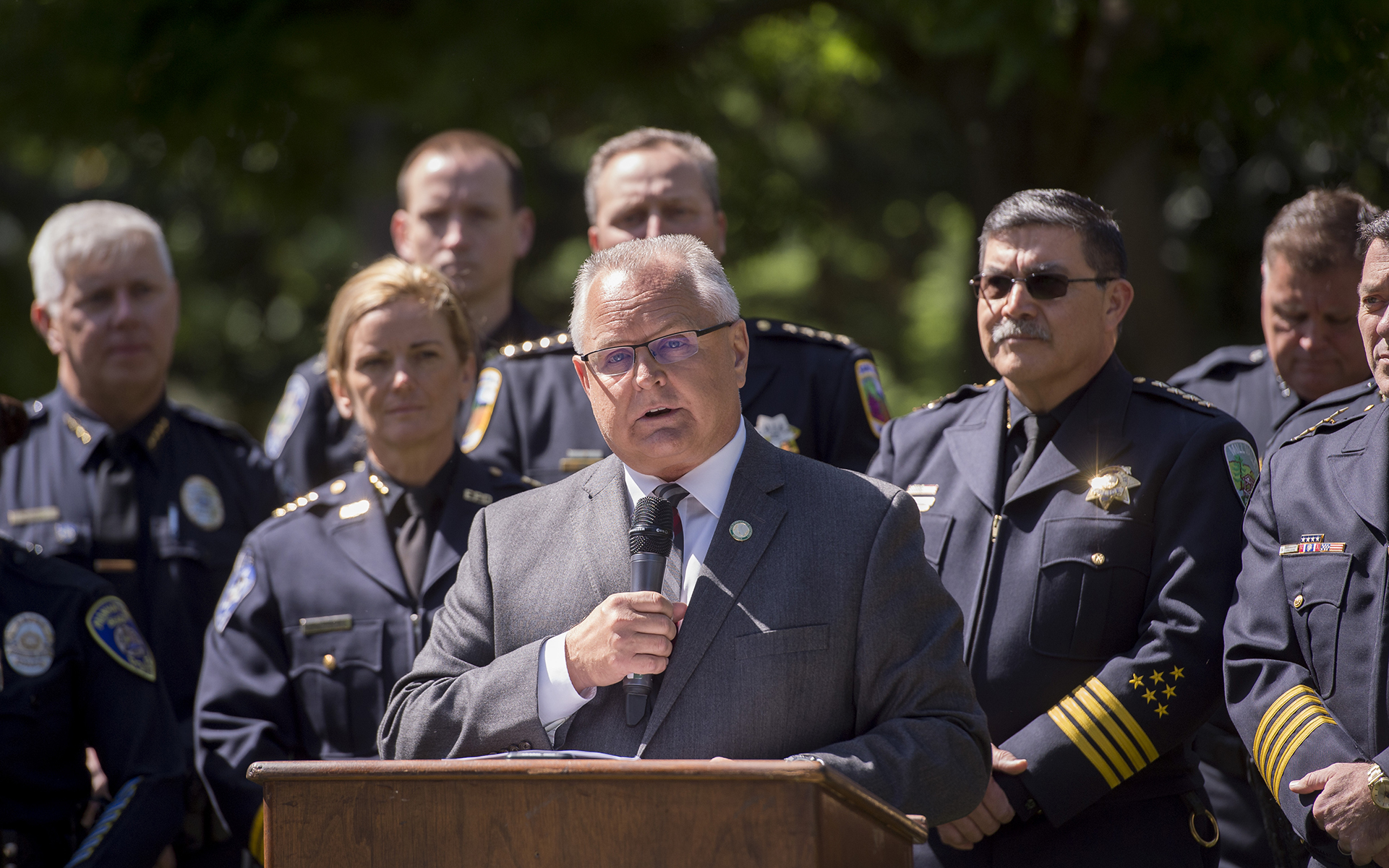 A representative from Lackey’s office said the Sacramento Police Department conducted the simulated saliva swab test because the department had previously used similar technology from Alere Toxicology in a pilot program with the state Office of Traffic Safety. Sacramento Police ultimately decided not to purchase the equipment, and the department continues to conduct drug-impairment screenings though standard sobriety field tests and subsequent blood tests.

“We wanted to see how accurate and how valid the results were from an immediate test versus the typical blood draw,” said Officer Matthew McPhail, a Sacramento police spokesman. “If we can’t use the system functionally for legal reasons, we aren’t going to spend money on it.”

McPhail said Sacramento police may still adopt the device or similar products in the future.

Why didn’t the event include the traditional inebriated subject? An aide to Assemblyman Lackey and CHP media relations staffers cited the propriety of putting a person behind the wheel of a motor vehicle after administering a drug that remains federally illegal.

The closest thing to the CHP’s old-school drink-then-drive drunken driving demos is a computer-based simulation administered, along with smoked cannabis of varying strengths, by human drug-recognition experts as part of a two-year, $1.8 million study currently being conducted on cannabis impairment and driving at the Center for Medical Cannabis Research at the University of California, San Diego.