Leafly Staff June 17, 2019
Share
Share on Twitter   Share on Facebook
Print
Cannabis concentrates, oils, and extracts offer many unique benefits that you won’t find smoking flower. From easy, precise dosing to clean and refined flavors, concentrates focus on the ingredients in cannabis that matter most. In this 4-part series, you’ll learn the fundamentals of concentrates, explore product options, discover how extracts are made, and more.

Cannabis concentrates come in a range of product types, forms, and consistencies. These products may vary in purity or chemical composition (i.e., THC, CBD, terpenes), which generally comes down to how the concentrate is extracted and refined as well as the source material from which the final extract is derived.

There are many different extraction techniques that can result in concentrates exhibiting a range of potencies, textures, and consistencies. These various forms are often named according to how they were made or their appearance—for example, butane hash oil (BHO) refers to extracts created using the solvent butane, and shatter describes a concentrate that appears glasslike in texture.

In this section, you’ll learn more about the different types of concentrates that are popularly vaporized or dabbed by consumers looking for a potent and refined cannabis product. We’ll also explain how they’re made through a variety of extraction processes.

How cannabis extracts are made

When it comes to concentrating the cannabinoids and terpenes from cannabis, methods can generally be broken into two primary types: solvent-based and solventless extractions.

Sound complicated? Don’t worry, we’ll break it down for you. 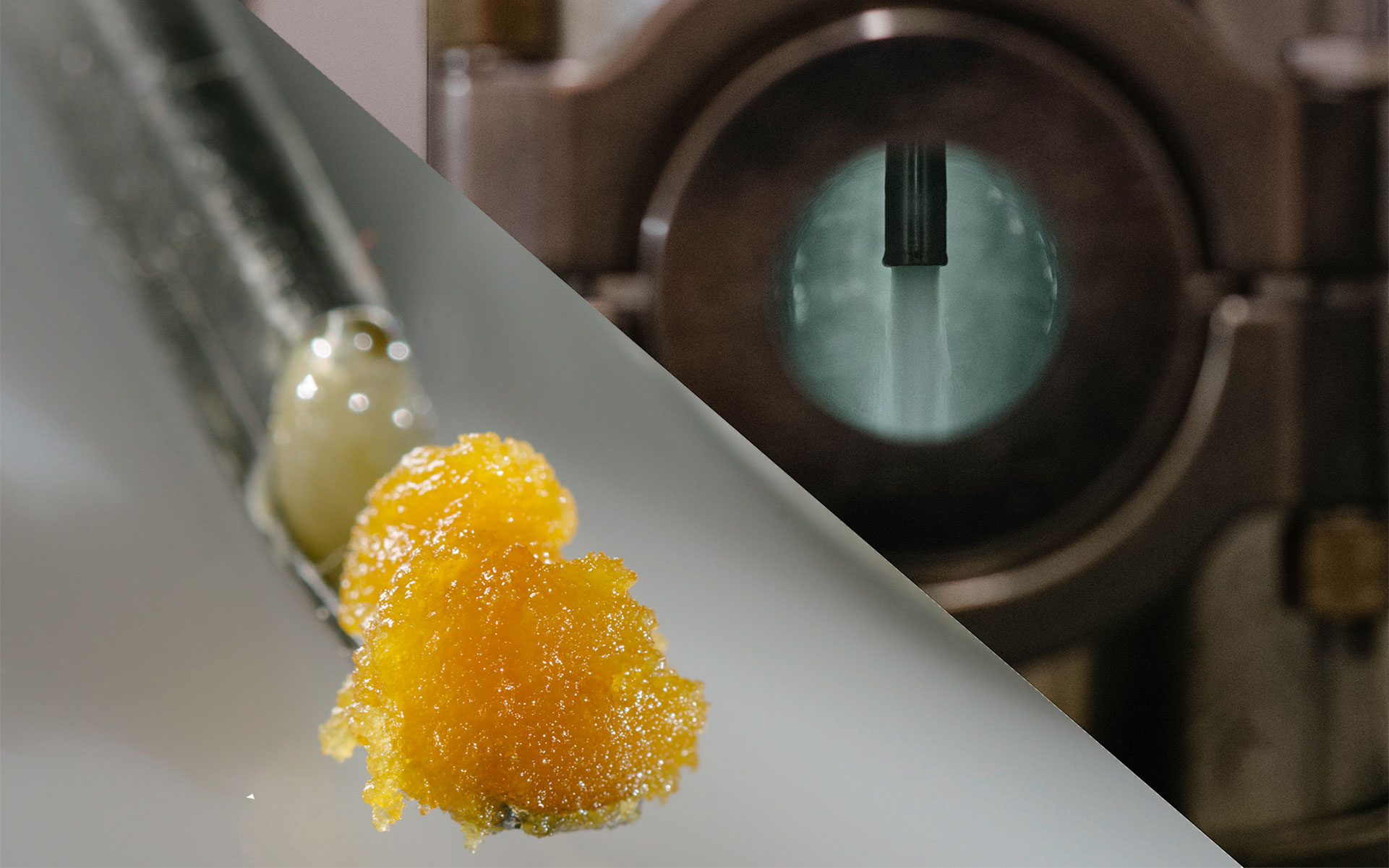 Solvent-based methods are commonly used by commercial extractors looking to create large volumes of extract. They use chemical solvents like ethanol, butane, propane, carbon dioxide, and others to strip essential oils (i.e., cannabinoids and terpenes) from plant material. 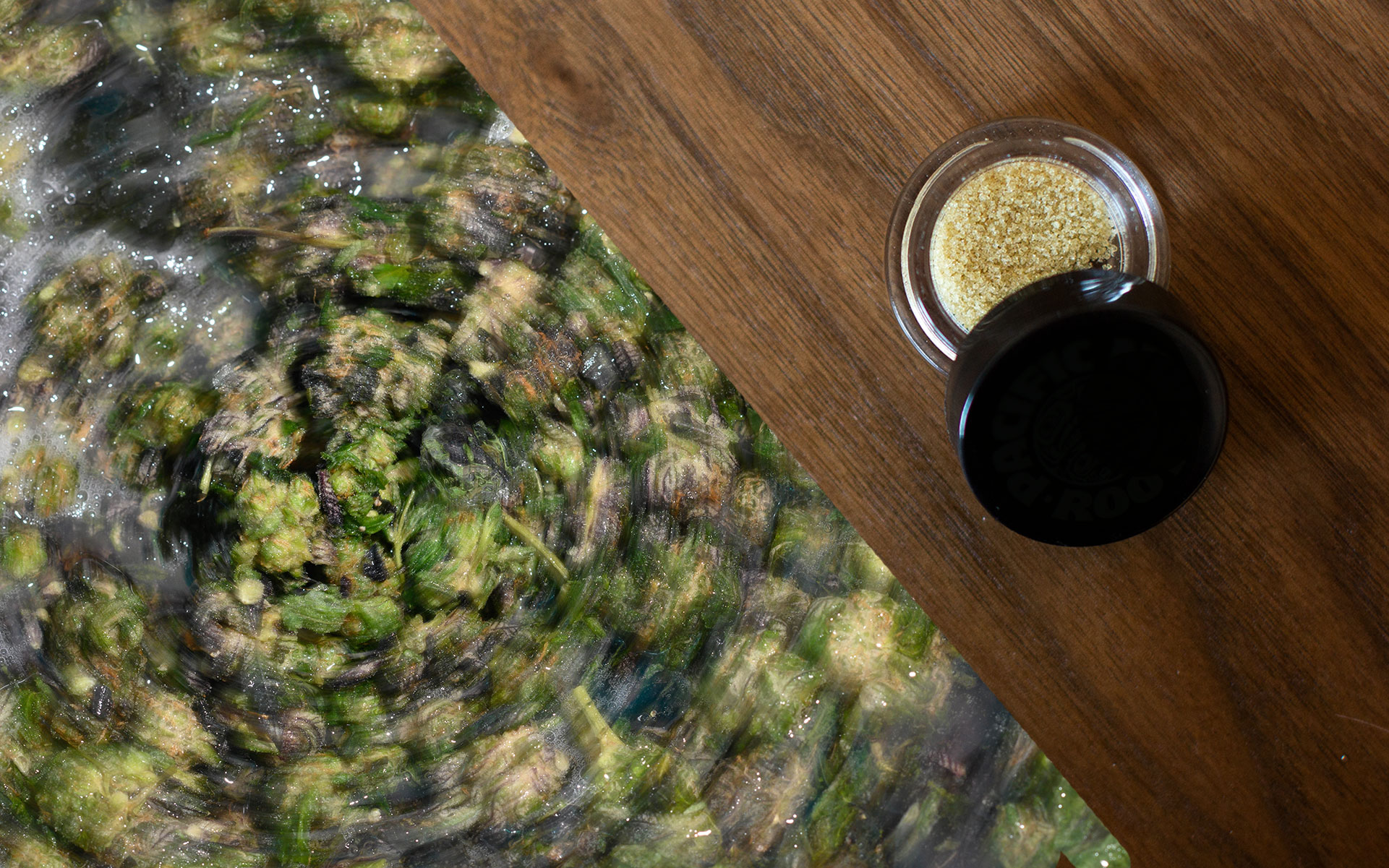 Solventless extraction uses mechanical techniques that utilize pressure, temperature, and filtration to concentrate the essential compounds from the plant material. The tools used to create solventless extracts, like hash and rosin, are relatively accessible and safe to use at home.

Note: Water is a solvent in the purest sense of the word. However, when the term “solventless” is used in cannabis products, it simply means no chemical solvents were used.

Variations in solvent-based extracts can be attributed to the solvent used as well as the purging methods used in the extraction. These affect how a product looks, feels, and smells. Below, explore some of the most common solvent-based concentrates you’ll find on dispensary shelves.

Hydrocarbon extracts are often simply referred to as BHO, short for butane hash oil. These concentrates are created using pressurized chemical solvents like butane and propane to strip the essential oils of cannabis from plant matter within a closed-loop system.

Here’s what’s so great about them: While other extraction methods might destroy the delicate chemical profile that makes a strain unique, hydrocarbon extraction tends to better preserve the cannabinoids and terpenes native to your favorite strains.

Hydrocarbon extracts can also be purchased at every imaginable price-point and consistency. While the potency and purity can vary between products, a standard THC-rich hydrocarbon extract typically express potency between 70-90% total cannabinoids.

Hydrocarbon extracts are usually vaporized through a process known as dabbing. 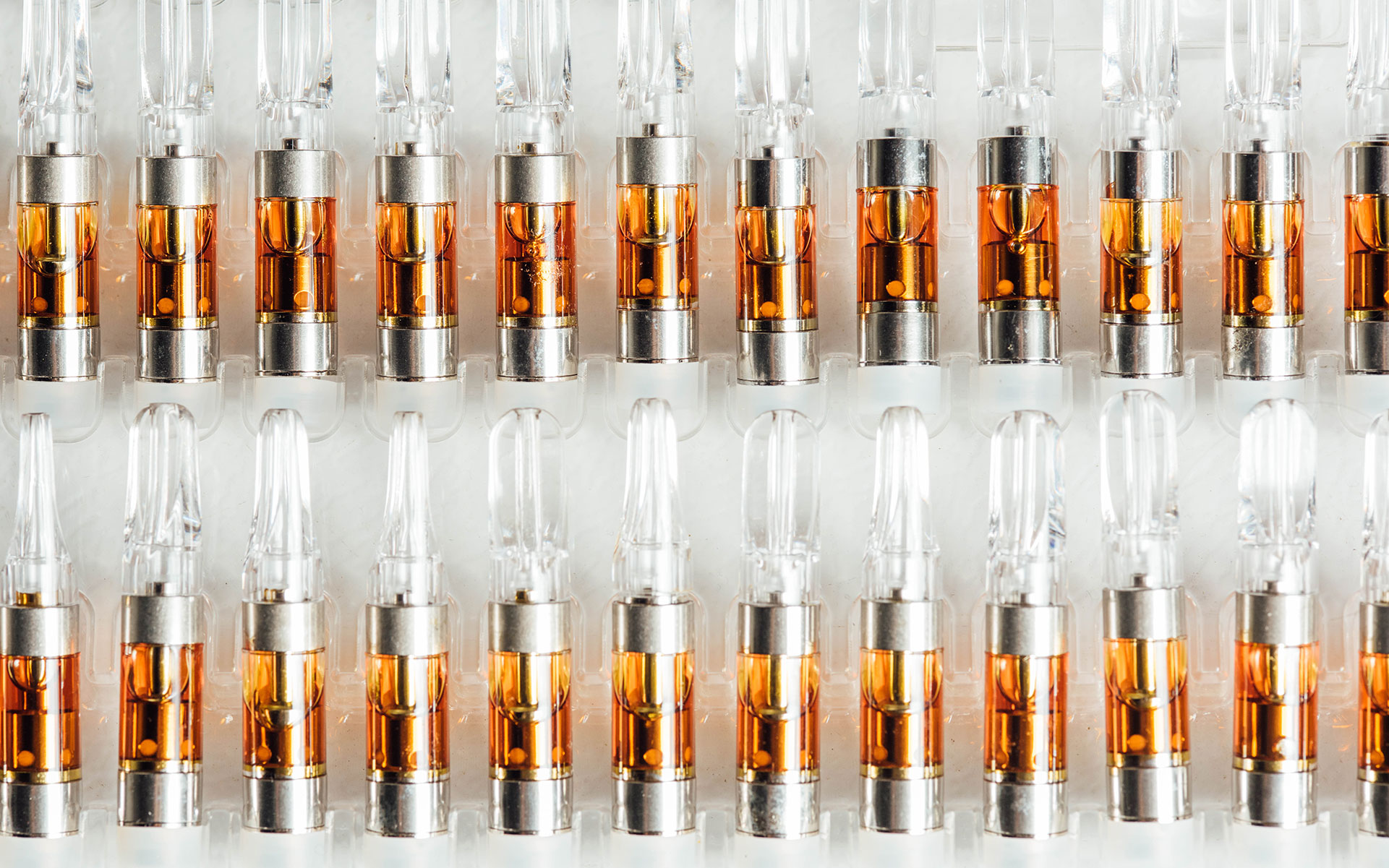 CO2 extracts use carbon dioxide under extreme temperature and pressure to strip essential cannabis oils from plant material. Carbon dioxide is a common solvent used for pharmaceutical extraction and other processes like decaffeinating coffee.

This extraction process has a reputation for being safe; CO2 is noncombustible and present in the air we breathe. While most solvent-based extractions use gas or liquid solvents, extracting with CO2 is unique because it utilizes carbon dioxide in its supercritical state, allowing it to take on properties of both a liquid and a gas.

CO2 extracts are commonly packaged as vape cartridges or as applicators used to refill cartridges. They are often further refined through a process known as distillation.

What Are CO2 Cannabis Extracts and How Are They Made? 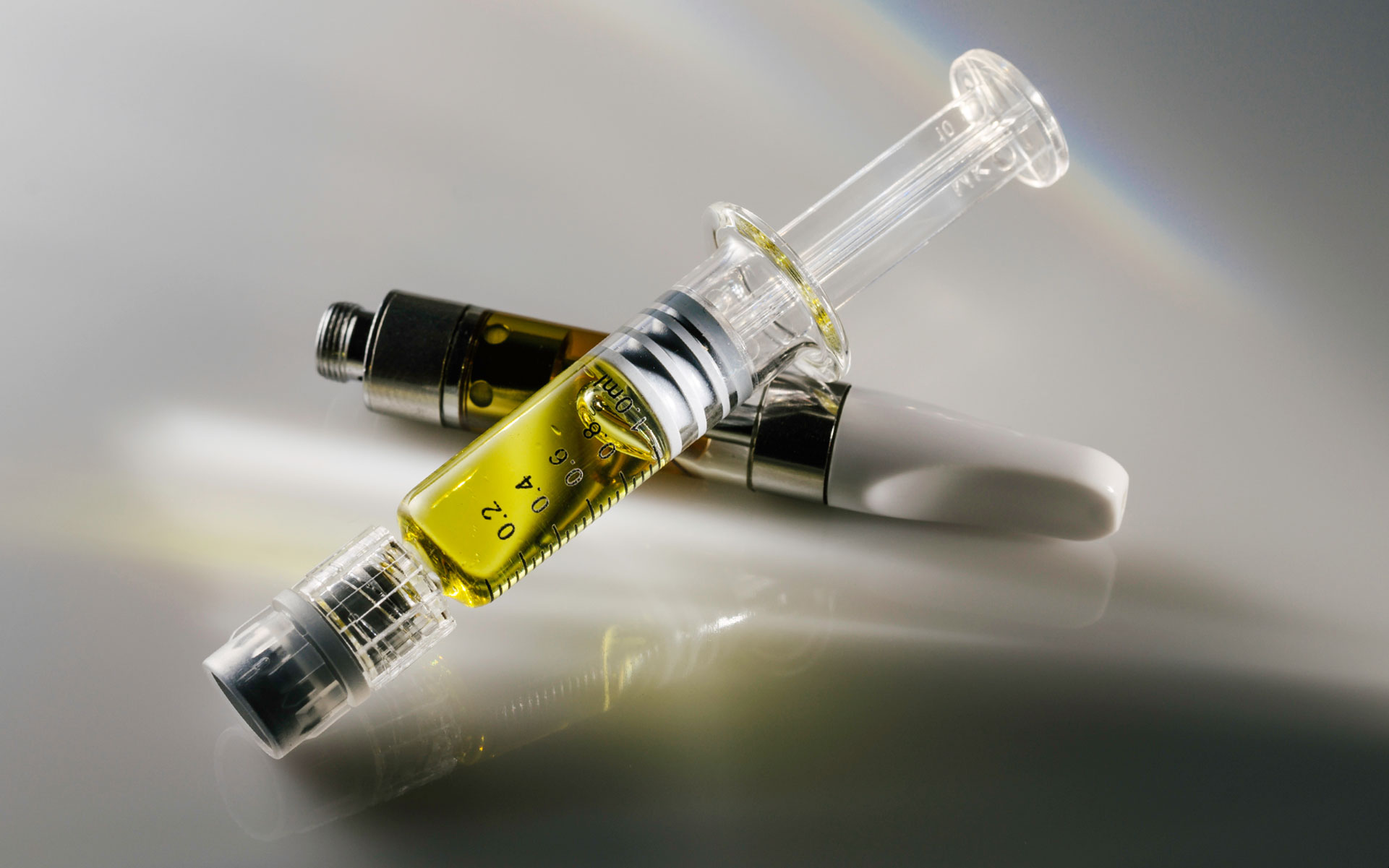 A raw or crude extract may still contain many terpenes, fats, and lipids. However, it can be further refined to contain only essential compounds like THC and CBD in a process called distillation. Good, clean distillate usually tests up to 90% or higher in total cannabinoids.

Pure distillate is virtually flavorless and is popularly used as a base ingredient for other cannabis products like edibles and topicals. Most commonly, distillate is used in vape cartridges and sometimes has terpenes added to enhance the flavor and effects. 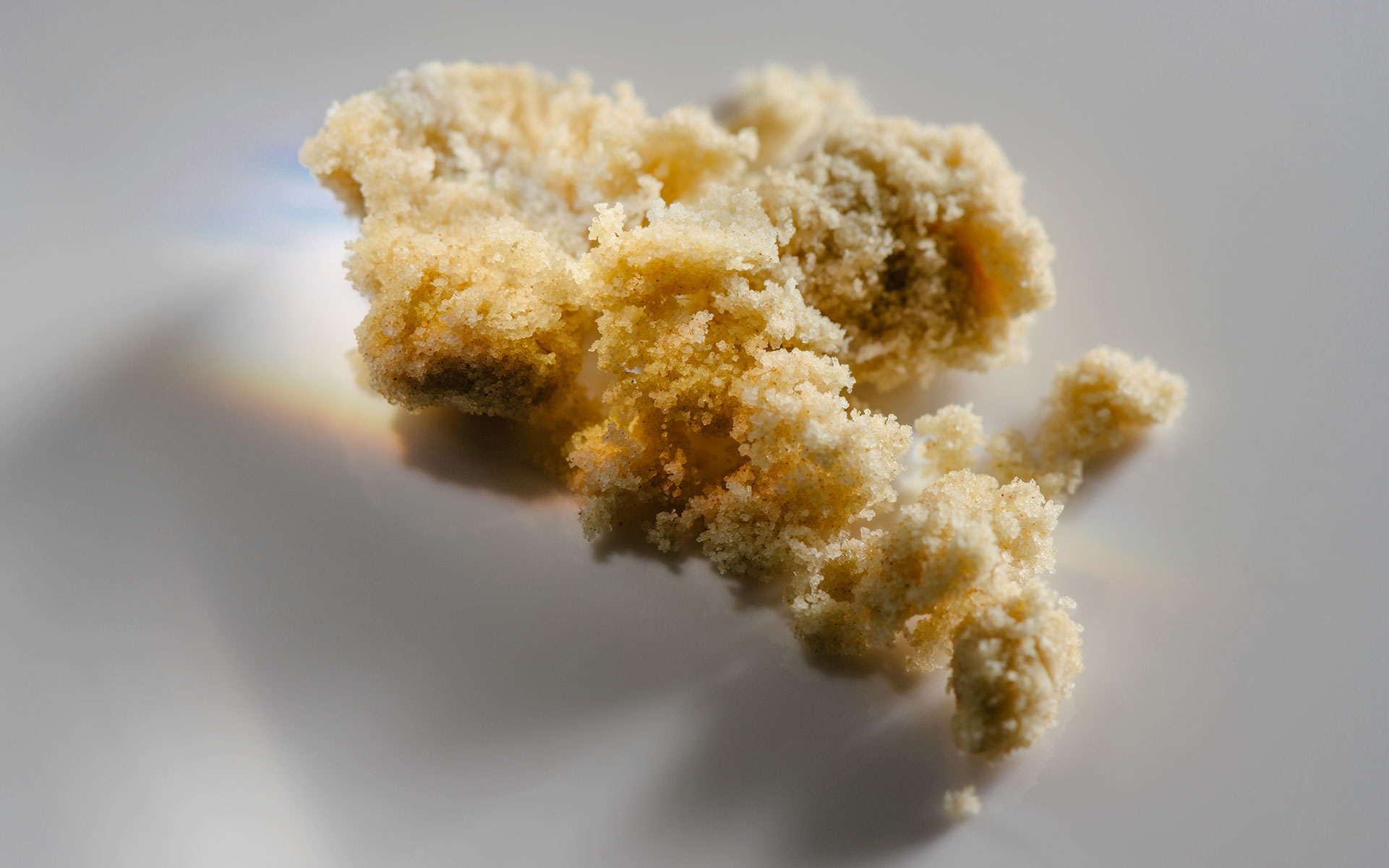 Dry sift, also called dry sieve, is a collection of refined resin glands that have been mechanically separated from the cannabis flower using a series of fine mesh screens. It’s essentially a refined form of kief.

To create dry sift, extractors rub, roll, and tumble dried cannabis over a finely woven screen. This process of agitation causes the dried resin glands to break from the plant matter, while the fine screen mesh allows only the smallest of particles—the trichome heads—to pass through. More advanced techniques use static electricity to help further separate the resin.

The sand-like, powdery resin is often used to top a bowl or sprinkled in a joint for added potency. Others prefer to press it into traditional hash or dabbable rosin.

What Is Dry Sift Hash? 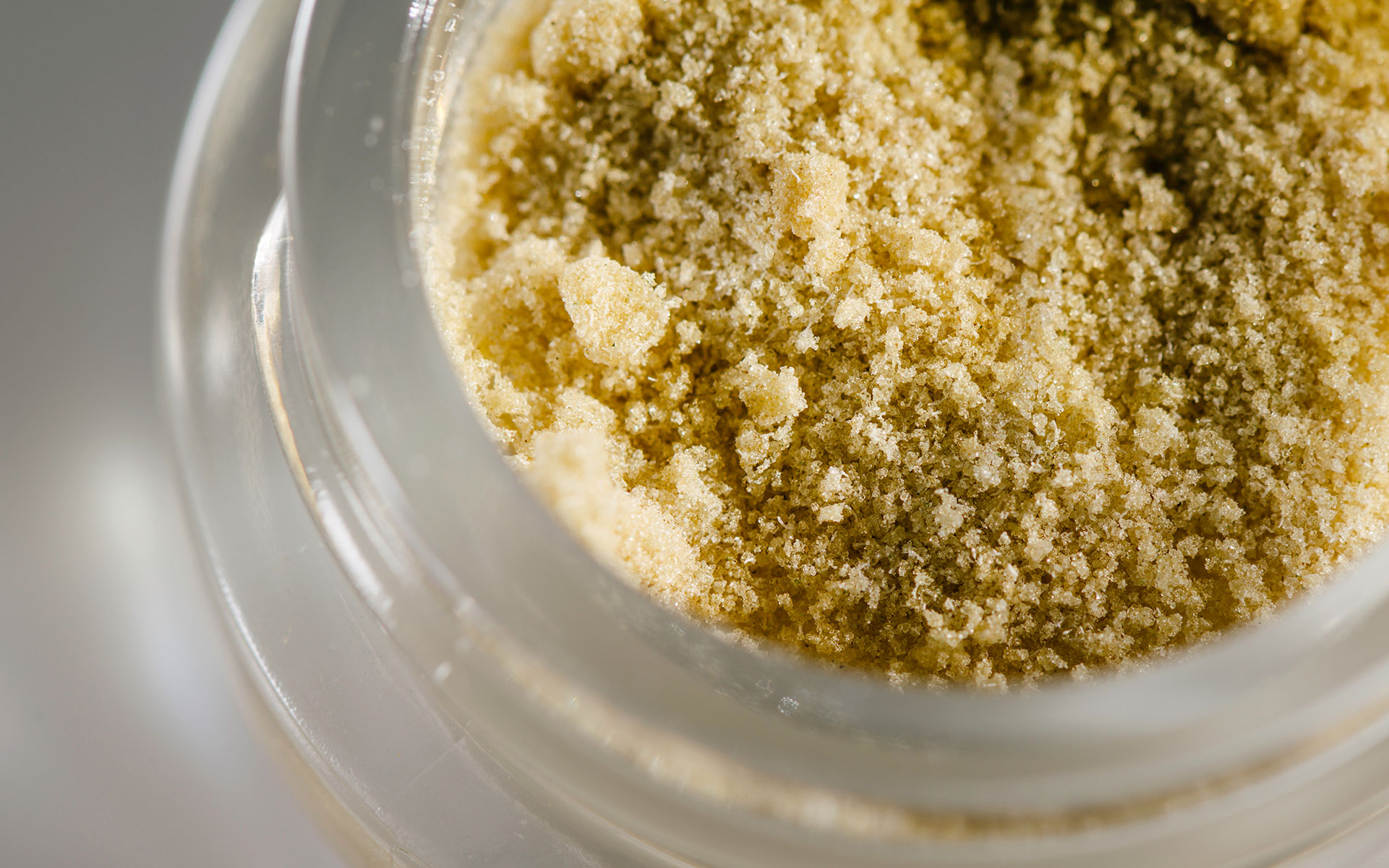 Ice water hash, also known as bubble hash, is created by agitating cannabis buds in ice water, which are then filtered through fine screen bags.

Making ice water hash is often referred to as washing because hashmakers use specially designed washing machines to agitate their plant material before it’s filtered through a series of fine screen bags. Once the resin has been filtered, collected, and dried, we’re left with usable hash. Its appearance and texture can range between dry and chalky to greasy and oily.

The highest grade ice water hash, often called full melt or ice wax, can be dabbed while lower quality grades are commonly pressed into rosin, smoked like a traditional hash, or reserved for infusions. The quality of hash is graded on a star system, with six being the highest quality and a single star reserved for the least refined products. 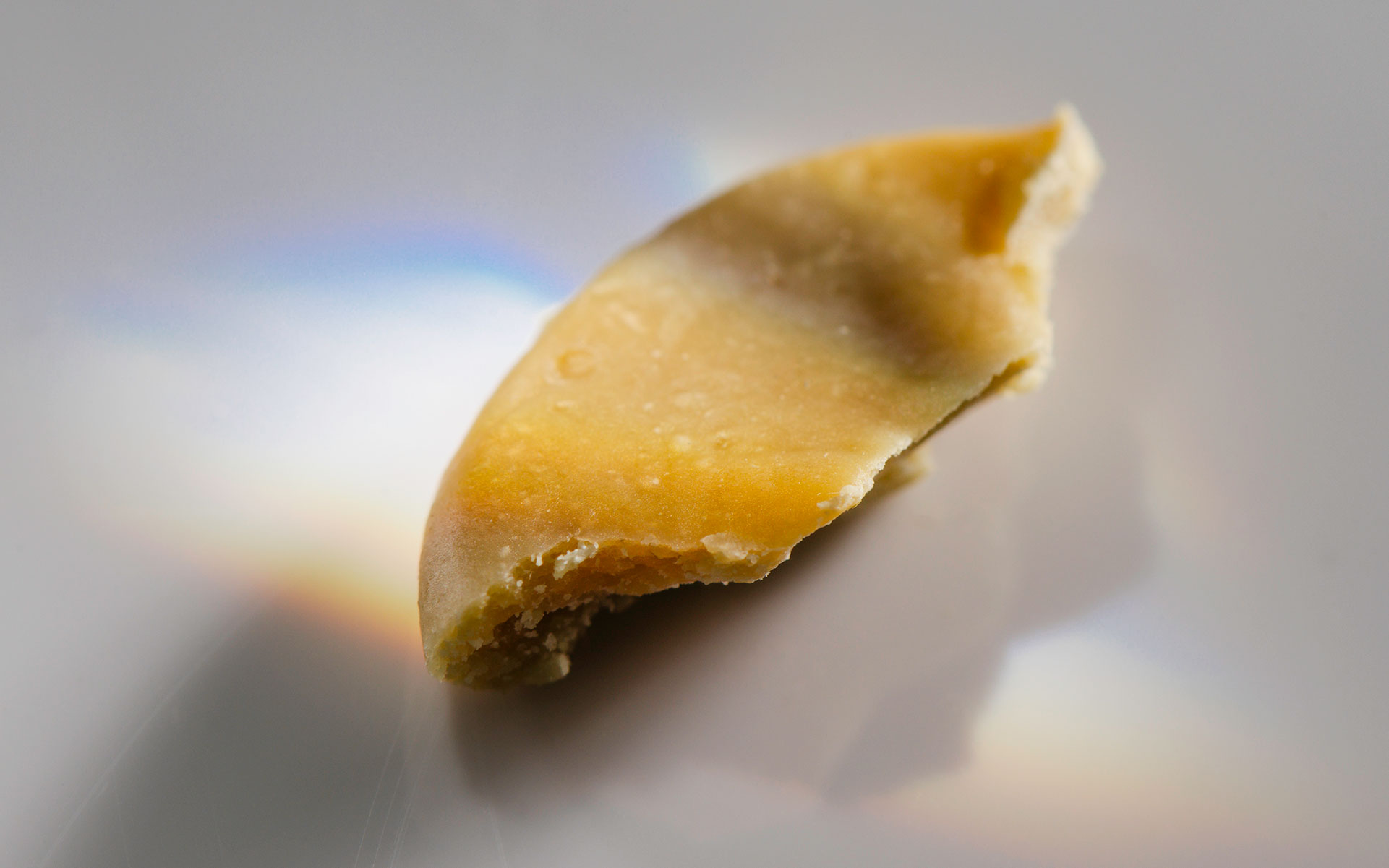 Rosin is a dabbable solventless concentrate that’s extracted using pressure and gentle heat to squeeze the resinous sap from cannabis flowers. Because rosin is an accessible form of extraction that can be done safely at home, it’s popular among DIY homecrafters.

There are three main types of rosin: flower rosin, hash rosin, and dry sift rosin. All three kinds are named after the starting material from which they were pressed. 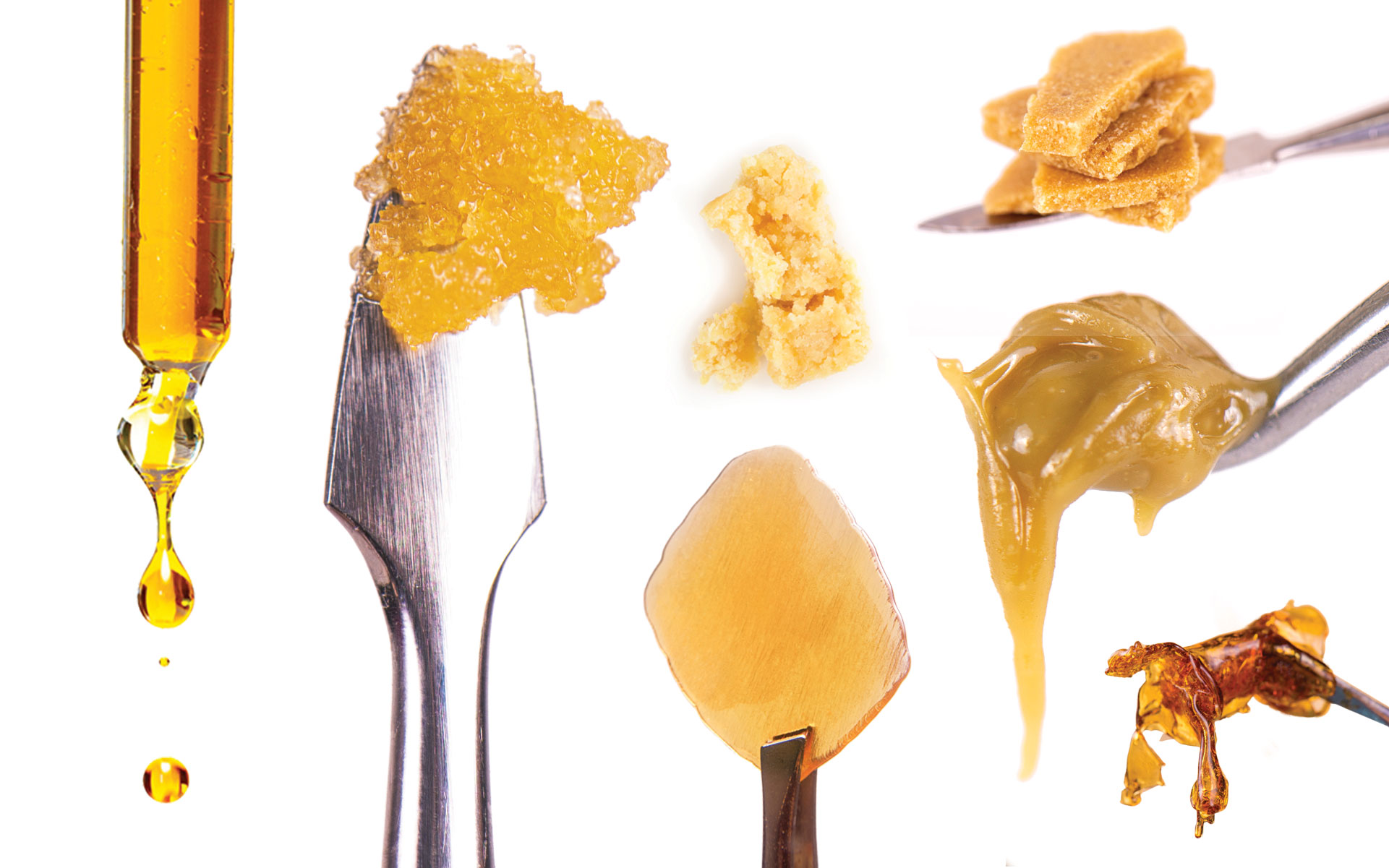 It’s not uncommon for concentrate products to be labeled and sold according to their consistency. While these forms are most commonly associated with dabbable hydrocarbon extracts, it’s possible to achieve these consistencies by manipulating other extraction methods. 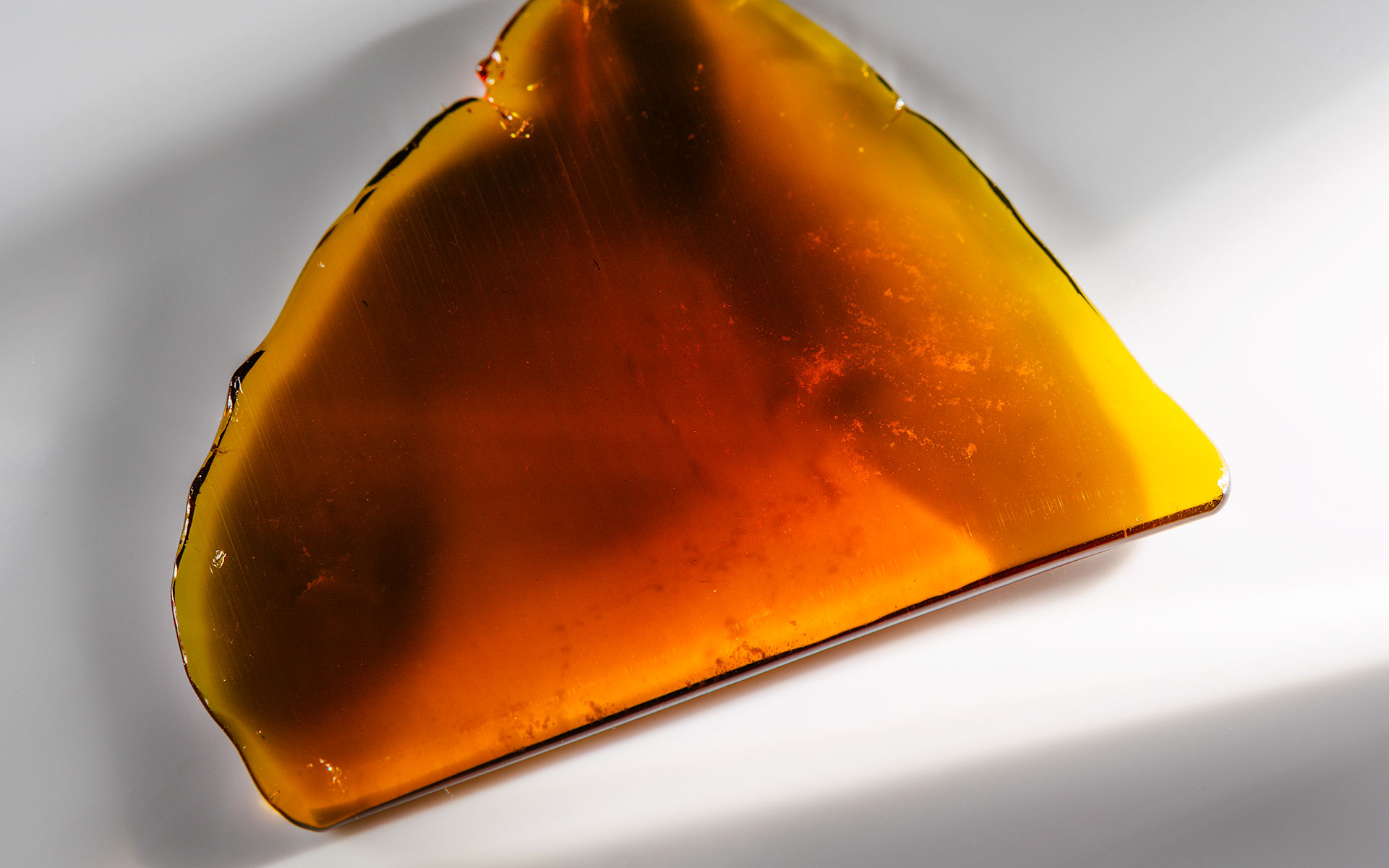 Shatter is a hard, translucent concentrate that easily “shatters” like broken glass or hard candy. Concentrates with this consistency are most often the result of hydrocarbon extraction, and it forms when a raw extract is poured out in a thin, flat slab and left undisturbed during the purging process.

Shatter products are generally affordable compared to other dabbable hydrocarbon extracts because they do not require additional processing. Shatter is easy to dose and you can handle it at room temperature or colder, but be careful if you’re using a tool—shatter can pop apart and fly in every direction if handled roughly. 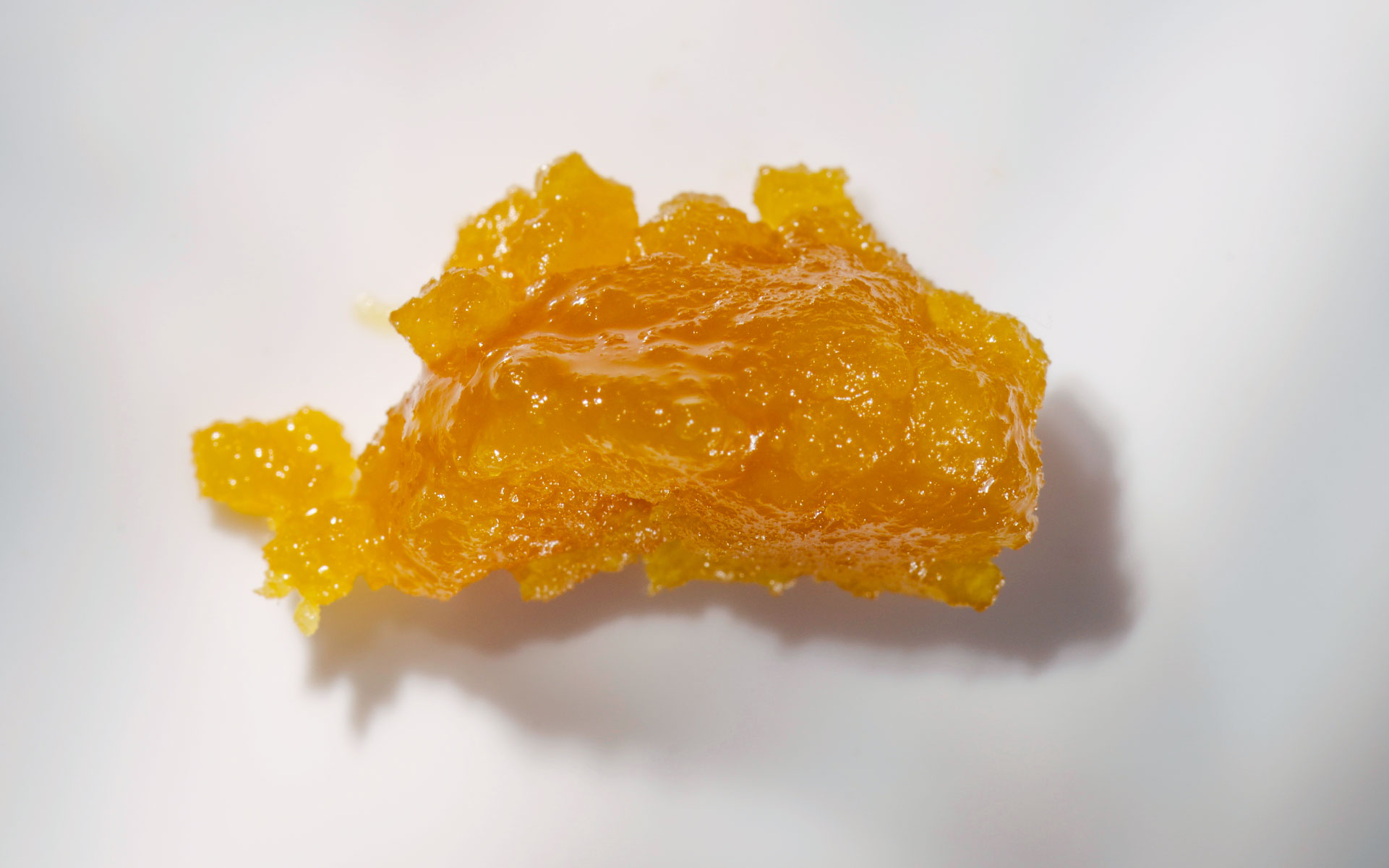 Cannabis wax is a soft, opaque concentrate that can vary in appearance, texture, and color—as determined by heat, moisture, chemical composition, and purging process. Many waxes are the result of agitating a raw extract into a whipped, aerated consistency.

When whipped vigorously into a smooth consistency that is moist with terpenes, these products are branded with names like budder, badder, frosting, icing, and more. When waxes are purged to create a drier texture, products are often named honeycomb and crumble for their porous appearance and chunky crumbs.

Pull ‘n’ snap is a glossy, flat concentrate with a soft, taffy-like texture. It often looks like shatter but has a more pliable consistency. Similarly to shatter, it is commonly a result of hydrocarbon extracts that are left undisturbed during the purging process.

Pull ‘n’ Snap products are appreciated for being relatively easy to work with, but they’re known to become stringy and messy when exposed to warm temperatures. When stored in cooler temperatures, the pull ‘n’ snap consistency becomes more shatter-like.