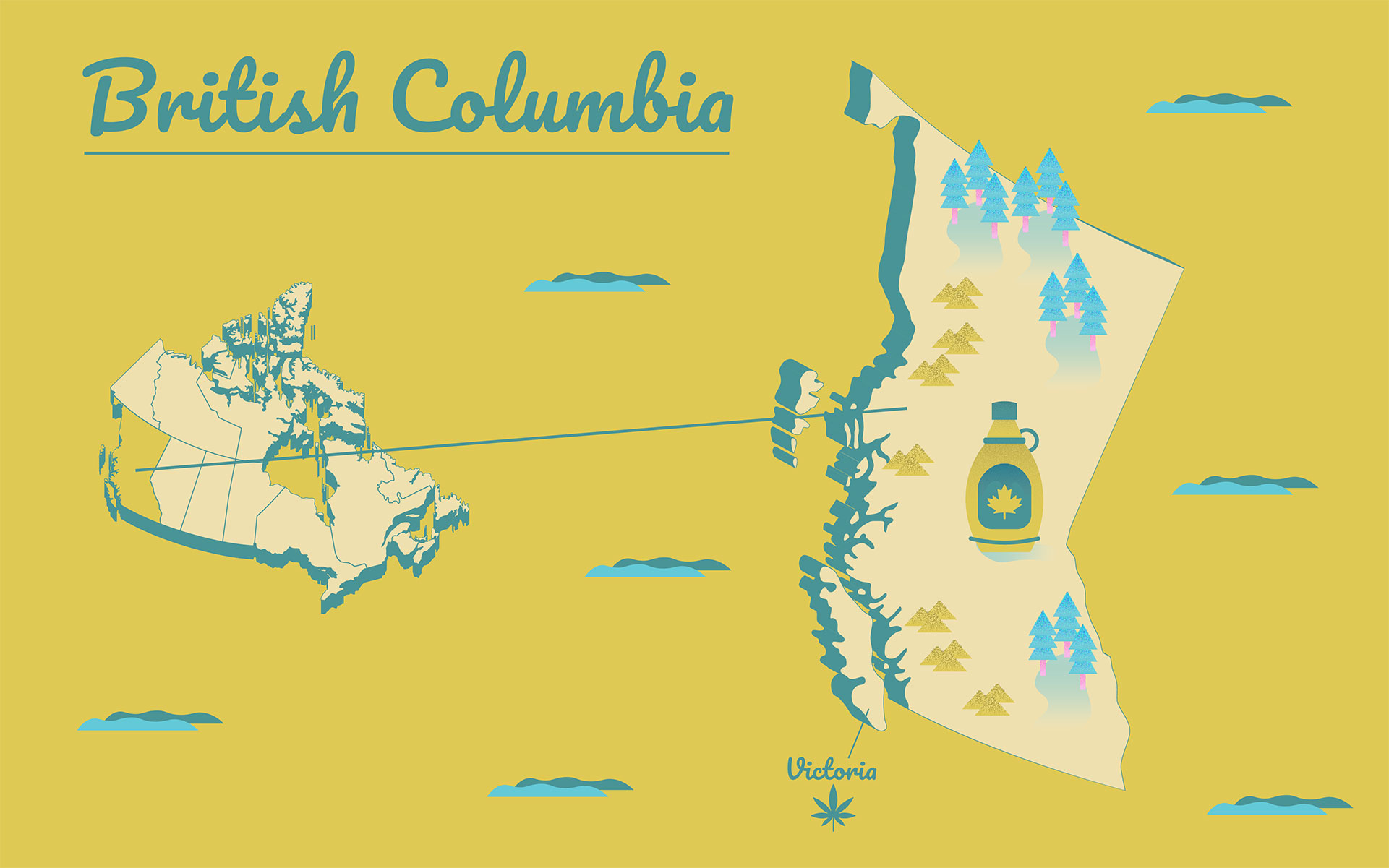 Cannabis will be sold in privately-owned stores and in BC Cannabis Stores (BCCS) operated by a provincial government agency, the BC Liquor Distribution Branch. BCCS will also operate an e-commerce web site for online ordering. Retail outlets are not allowed to sell alcohol on the same premises or web site as cannabis.

Each province sets its own legal age, as with alcohol. In British Columbia, the minimum age for purchase and possession is 19.

A gram of flower from Solace Health.

What Can I Buy in BC?

Public and private stores will be allowed to sell a range of 150 strains of dried cannabis (aka flower or buds), pre-rolls, cannabis oils, capsules, and seeds (but not seedling clones) for home growing, from 32 licensed producers. Stores may also sell cannabis accessories, such as rolling papers or wraps, holders, pipes, water pipes, and bongs. Edibles are not yet allowed, but are expected to enter the market nationwide in late 2019.

In Kamloops, so far. But there are a number of stores in Vancouver currently working through the application process. We’re tracking them on our page devoted to BC store locations: Recreational Cannabis Stores in British Columbia.

The BC Liquor Distribution Branch refers to adult-use cannabis as “non-medical cannabis.” Don’t be confused by the term. They mean adult-use or recreational cannabis. 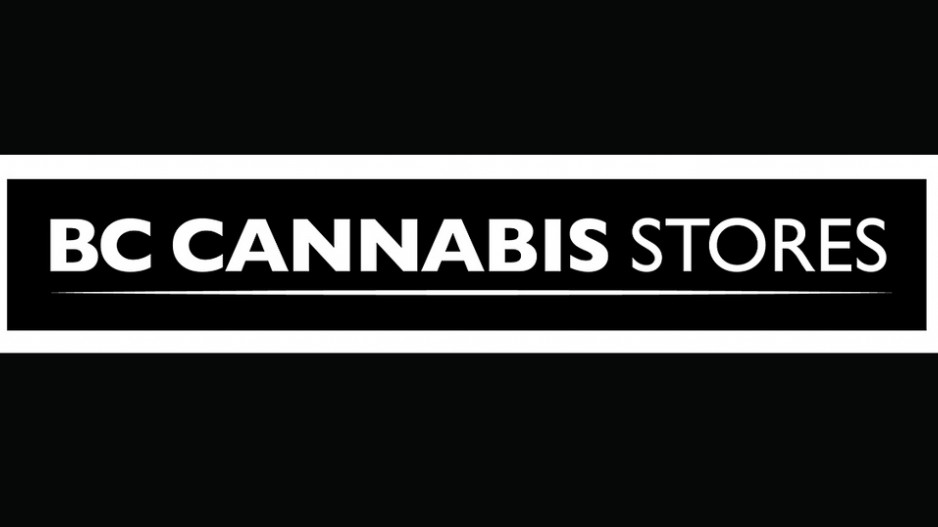 No frills, by law: the store logo.

Hard to say. The BC Liquor Distribution Branch is making no promises. The LDB has signed a lease for its first BC Cannabis Store (BCCS), in the Columbia Place Shopping Centre in Kamloops. Most market watchers expect that store to be open on Oct. 17.

“We are aiming to open the first government-operated retail store in time for legalization on October 17,” the LDB wrote as of Sept. 25, “but first we must establish our wholesale distribution system for non-medical cannabis, with the goal to make it operational by the time the government legalizes non-medical cannabis.”

All About BC Online Sales

BCCS has contracted with Shopify to create a cloud-based web portal for cannabis purchases. The web site is not yet live, but is expected to begin accepting orders on Oct. 17. Online orders will be delivered by contracted, secured companies, not by Canada Post. An ID-verification processes will be put into place to ensure the product isn’t being sold to minors.

Possession Limits in BC

Those 19 and up can possess up to one ounce (30 grams) of cannabis in public. Cannabis is typically broken up into grams (for smaller portions) and ounces (for larger portions), and yes, it gets confusing. When people say “an eighth,” for instance, they mean 1/8 of an ounce of cannabis flower, or a little less than 4 grams. Leafly’s visual guide (left) gives you an idea.

Cannabis transported in a motor vehicle must be in a sealed package or inaccessible to vehicle occupants. In legal US states this has generally translated into a simple guidance: Keep it in the trunk.

Each customer is limited to the personal possession limit, which is 30 grams of cannabis. It’s unclear whether there are limits on seed purchases. Cannabis oil will figure into that 30-gram limit, but as of now it’s unclear exactly how.

Can My Kids Enter the Store With Me?

No. Unlike liquor stores, minors may not enter any non-medical cannabis store in the province.

Where Can I Consume Cannabis in BC?

Cannabis use will be generally allowed in public spaces where tobacco smoking and vaping are permitted. Smoking and vaping of non-medical marijuana will not be permitted in areas “frequented by children” such as schools, parks, playgrounds, and community beaches. Marijuana consumption inside motor vehicles is forbidden. Local governments may set their own restrictions on consumption.

Note: The provincial fine for smoking cannabis in a prohibited place is $230, but the fine for vaping is $58.

Rules around indoor use vary. Cannabis can be consumed in designated smoking areas in hotels, hospitals, assisted living and retirement facilities, if those institutions allow it.

Home-grow Is Allowed, With Limits

Yes, up to four plants per household (so long as the house is not also used as a daycare). The plants must not be visible from public spaces off the property. Landlords and strata councils are able to place restrictions on or prohibit home cultivation. Retail cannabis stores are allowed to sell cannabis seeds but not seedlings (known more commonly as clones).

Can you transport cannabis from one province to another? Yes. But you must abide by the legal possession limit in each province. In B.C., the limit is 30 grams of cannabis per person. Important: Do not attempt to transport cannabis across any international border. Cannabis is legal in Washington State, Vermont, Alaska, and Maine, but the border crossing is a federal zone. And cannabis remains federally illegal in the United States.

Can I Fly With Cannabis?

What About Vancouver Dispensaries?

The government is indicating that Vancouver’s outlaw dispensaries, which the city has started to license, will be able to apply to continue selling marijuana, but the marijuana would have to be legally sourced. Also, the Council Chamber of Tofino, a district located on Vancouver Island, passed a proposed zoning amendment in June that would prohibit the use of any land or building for the commercial sale, production, and distribution of cannabis. The government has not set a cap on the number of private retail licenses within the province.

The Cannabis Supply Chain in BC 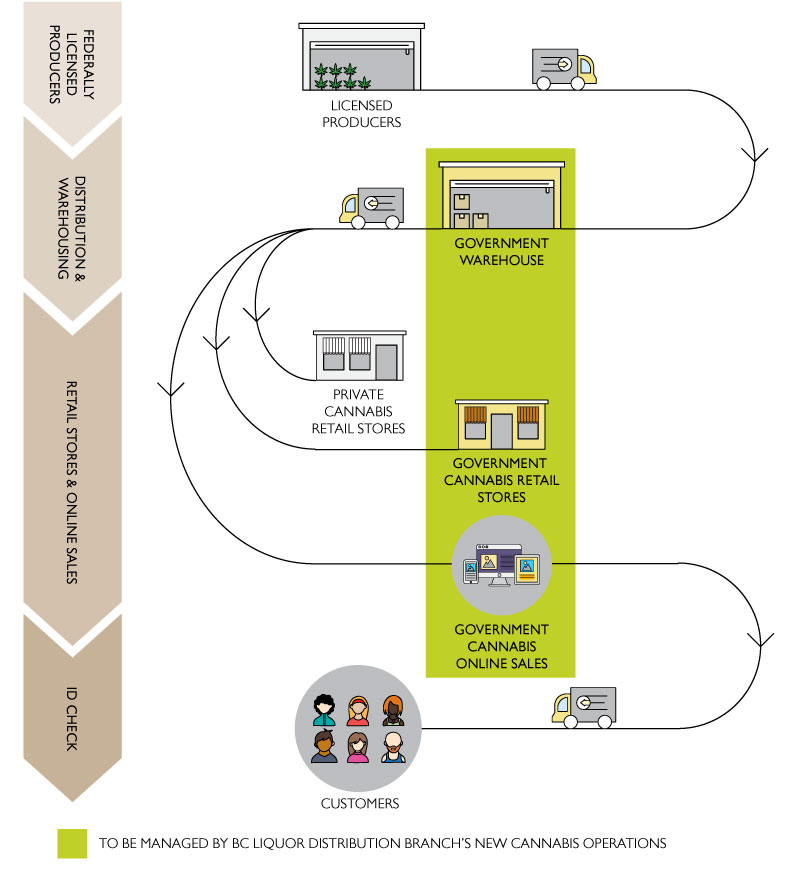 The BC Provincial Laws

Cannabis Control and Licensing Act and the Cannabis Distribution Act govern the regulation of cannabis within British Columbia.

No Cap on Cannabis Stores in BC

The province is placing no limit on the number of stores, but municipalities may limit or prohibit marijuana shops within their boundaries.