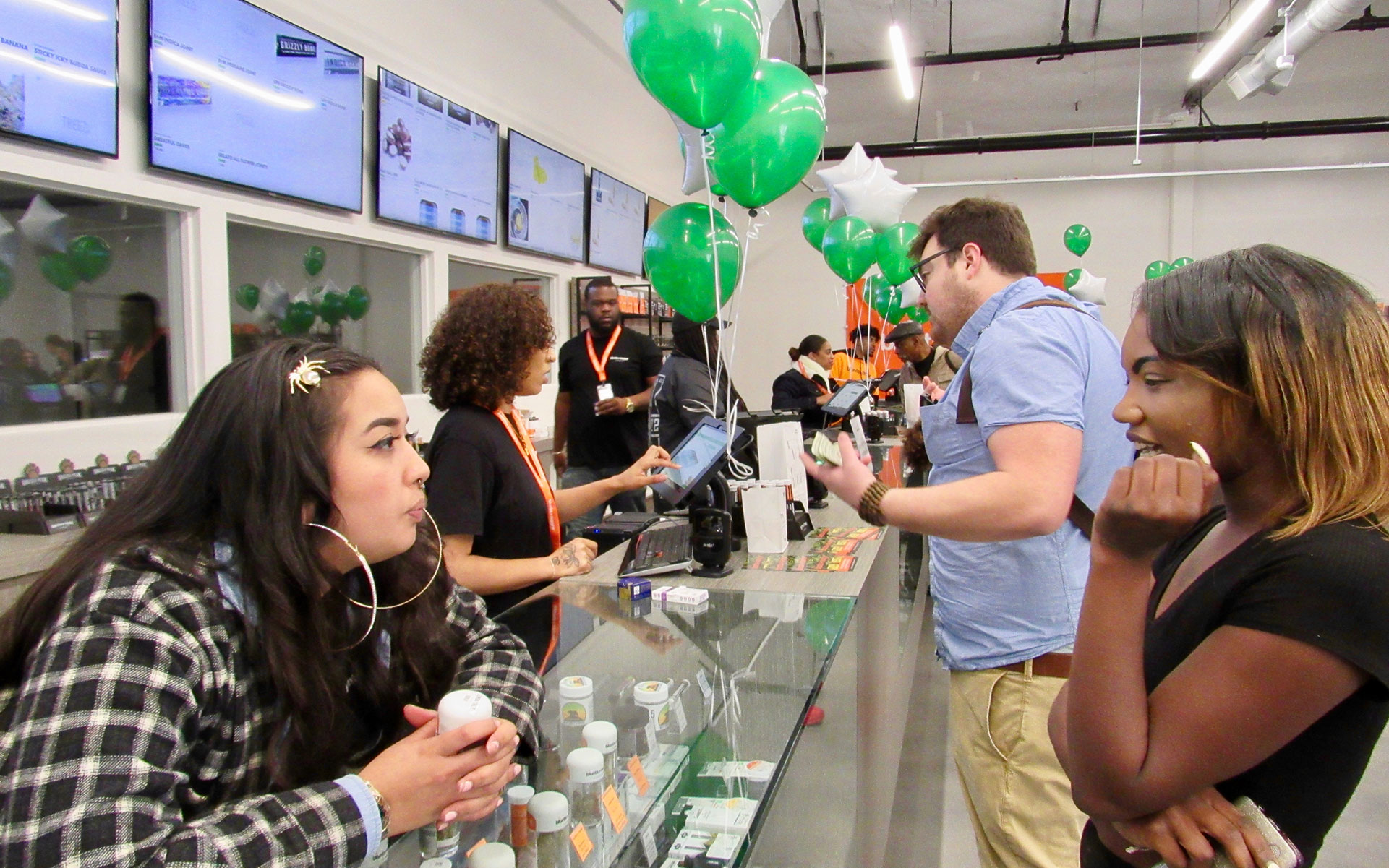 Blunts and Moore, Oakland CA, 2019. (Leafly File Photo)
Shoppers in California can vote with their dollars for equitable cannabis this Christmas at Blunts & Moore, the first dispensary to open under the city of Oakland’s revolutionary new social equity rules.

“It’s amazing. I’m humble and hungry,” said Blunt. “This is a very big deal to be able to sell weed legally in Oakland.”

“This opening is history,” said Moore. “I’m glad it’s happening in Oakland. We’re looking forward to being the best out there.”

Blunt—a 31-year-old, fourth-generation Oaklander—sold weed since he was 16. In 2003, his wholesale dealer snitched on him, and he got five years’ probation for a marijuana felony. That felony conviction made Blunt eligible for fast-tracked, adult-use licensing under Oakland’s May 2016 equity law.

Blunt heard of the program in October 2017, and a friend linked him up with Moore, an Atlanta native with experience at Morgan Stanley bank.

“As soon as I heard ‘Blunt and Moore,’ I knew we were going to be a success,” said Blunt.

The duo won one of four coveted equity permits from the Oakland City Council and immediately received a folder full of offers from investors. 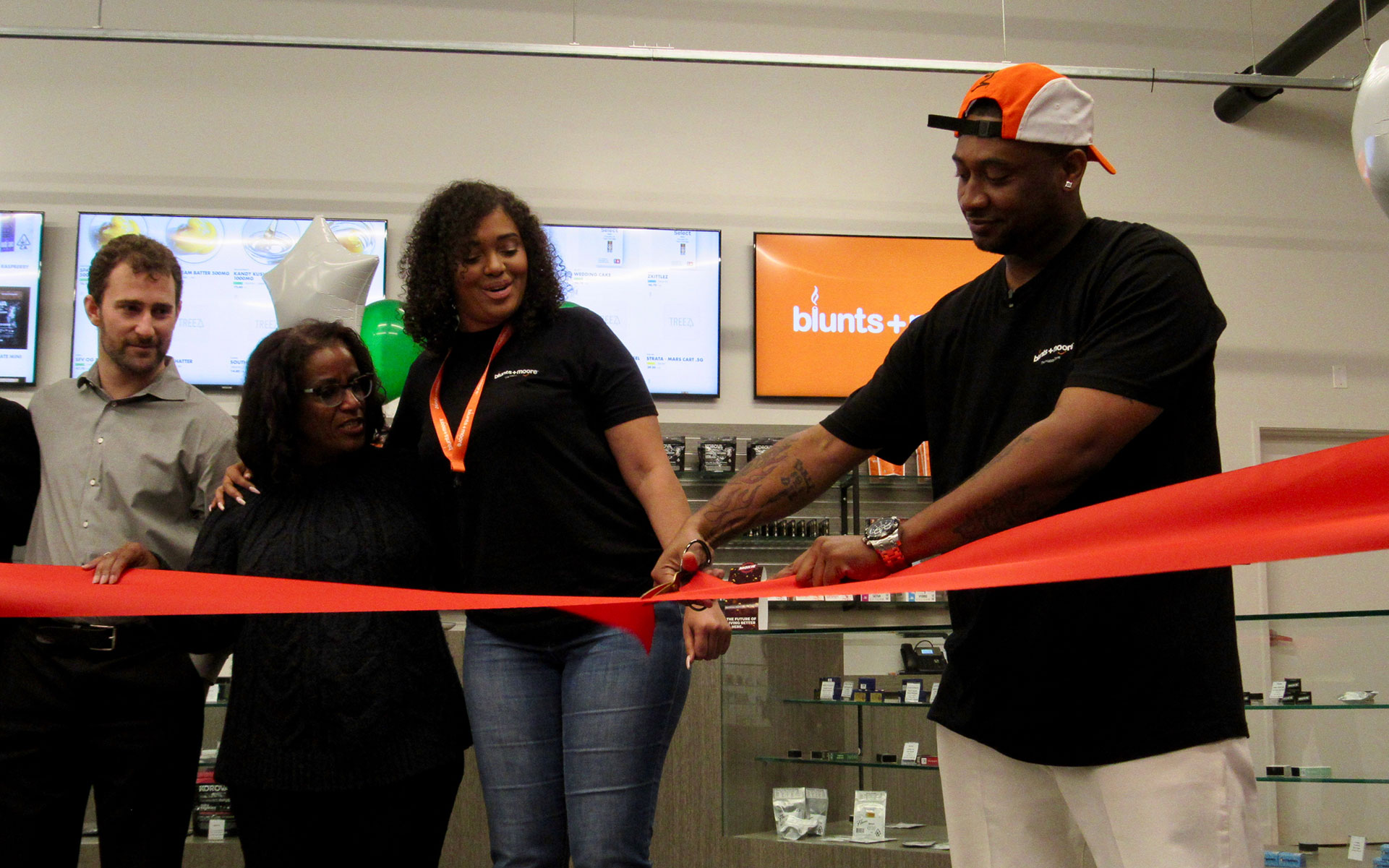 A San Diego-based investment, construction, and cultivation group negotiated a deal to lease retail space to Blunt and Moore plus provide financing and professional services. In exchange, Grizzly Peak Farms received the first adult-use cultivation and distribution license in Oakland.

Just a frisbee disc’s toss across a six-lane highway from the Golden State Warriors’ current home, Blunts & Moore has a bright, clean, minimalist look evoking a national chain. The 30 employees inside are 90% Oakland residents. Thursday, they staffed nine registers on the polished, concrete sales floor. The white walls smelled freshly painted, and guests kept their scarves on in the cool space while a DJ mixed Talib Kweli on the PA.

The club’s more than 500 products include Northern Emeralds flowers, Guild extracts, and Korova edibles. Priced to move Thursday: $21 eighths of Fire Sale, a greenhouse-grown, Monterey County brand with rocking Strawberry Banana and GG#4. Buy two, get one for a penny.

“The product is fire,” said Blunt. “I’m an asshole and everything has to come through me. I’m our buyer.” 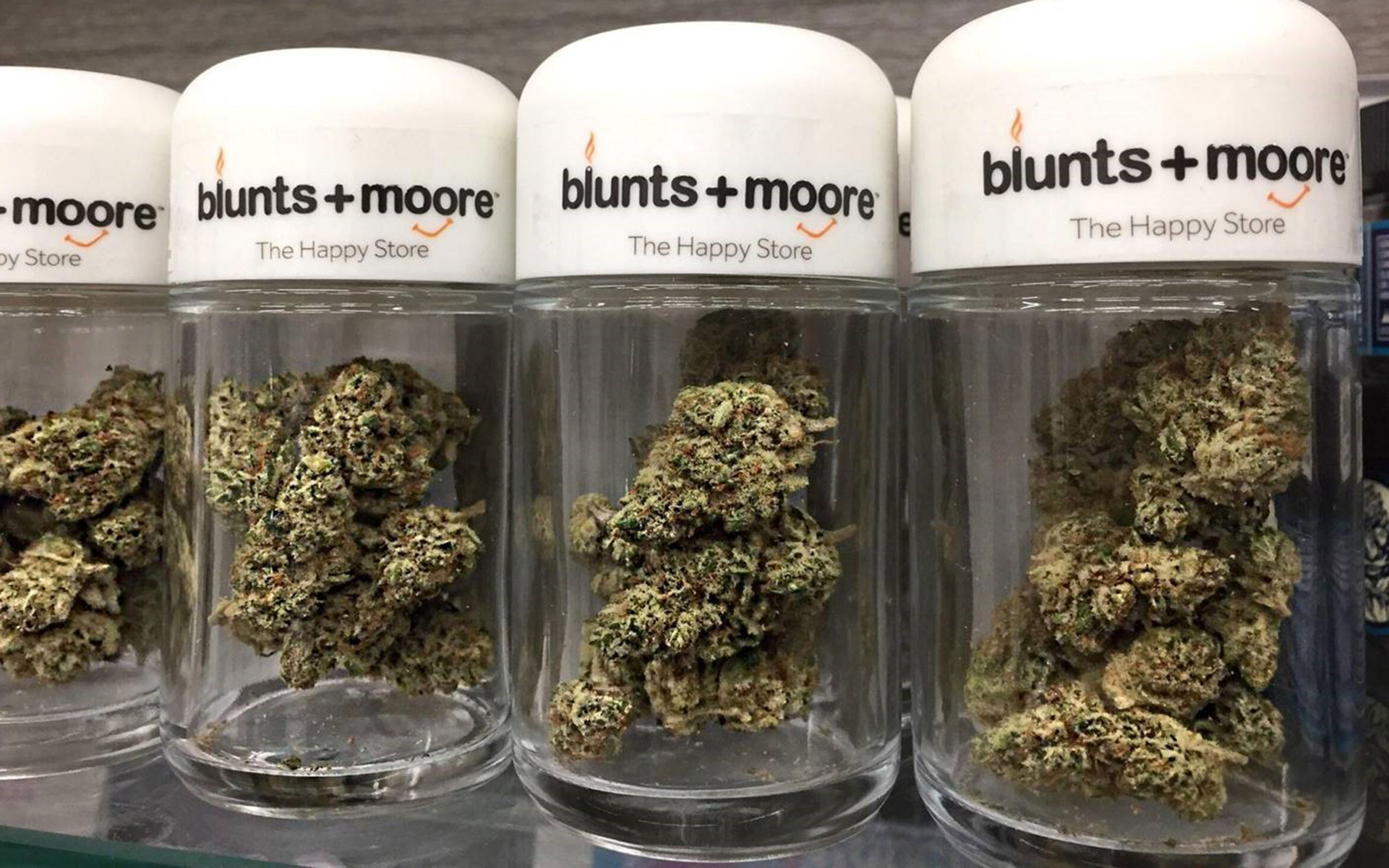 Blunts & Moore aims to compete on price, quality, and service, he said. Eighths that are $75 elsewhere will be $55 at Blunts & Moore.

Retired from the illicit market, Blunt wiped off tears talking about how the store’s soft opening drew all his old customers and friends.

“Had you asked me even a year ago, we thought it wouldn’t happen. I can’t even put it into words how it feels.”

Blunt eventually wants a NASDAQ listing and a nationwide franchise. “Equity needs to be in every city they have cannabis,” he said.

More than two years after California voters legalized cannabis in 2016, there are only six operating adult-use cannabis retailers licensed in Oakland, a city of 425,000 people.

A seventh store, Oakland Organics, is set to re-open at a new location on Shattuck and Alcatraz St. in January. 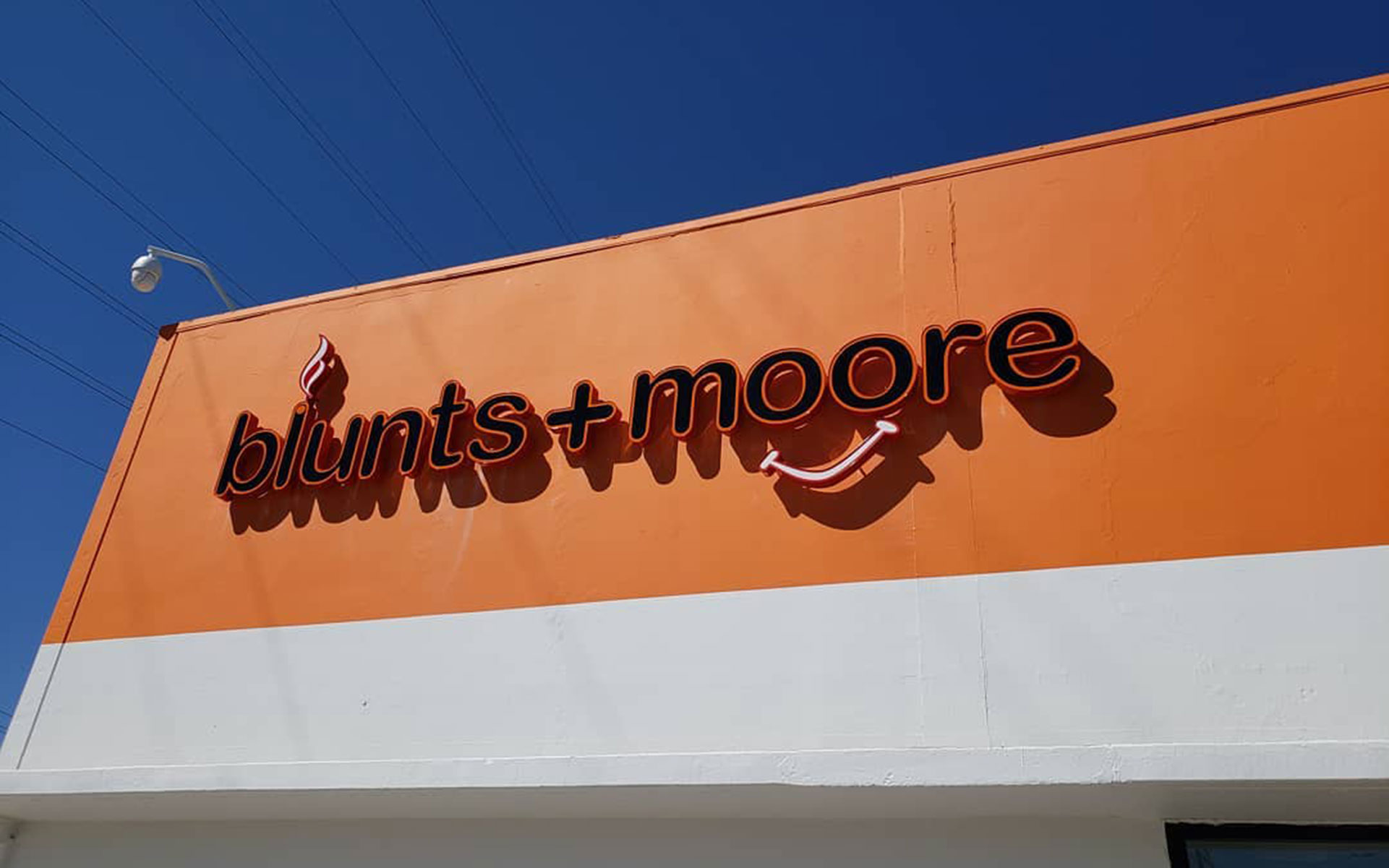 Minor said the seemingly slow approach is the right one. Inequality in mainstream capitalism has come to newly legal cannabis.

“All existing issues get magnified here. It’s a big deal to have folks like this be able to open a dispensary here. I hope more cities and counties adopt it,” he said. “This shows it’s possible and perhaps more sustainable and prudent to invest in the community, as opposed to opening the floodgates and having a race to the bottom.”

“This is what equity looks like,” added Oakland councilmember Desley Brooks creator of the equity program.

Indeed, Brooks’ only-in-Oakland idea has spread nationwide, becoming law in Massachusetts and Maryland. No longer an afterthought, equity programs are a starting point for the next legalization referendums.

Malcolm Turner, a 31-year-old black Oakland resident and a Blunts & Moore cashier, saw his hiring notice on Instagram. Turner came in without a resume—he was driving by anyway—and met with Matthew Yamashita from Grizzly Peaks and Moore.

Turner makes above minimum wage, “but just to be involved with starting up something like this, in Oakland, is amazing. I’d do it for free.”