With legislation pending in Congress that would effectively end federal prohibition, a new national poll has found record support among registered voters for legalizing cannabis and taking steps to limit the impact of nonviolent criminal convictions.

A majority of all partisan, gender, and racial groups now support cannabis legalization, the poll found. Across all respondents, 68% said they favor legalization, with 40% saying they’re “strongly” in favor. That’s up since April, when a Quinnapiac poll found 63% support for legalization. In January, that number was 58%.

The latest numbers are based on an online survey of 1,000 registered US voters, which was conducted in late April and early May by the progressive Center for American Progress and polling firm GBA Strategies.

The new survey also revealed that a strong majority (70%) support sealing criminal records of nonviolent felonies or misdemeanors for people who complete their sentences and have not committed other crimes. “Sealing their record does not clear an individual’s criminal record,” the poll notes, “but it means these individuals would not be required to disclose their criminal record when applying for a job, housing, or further education.”

While most of today’s discussion of cannabis policy centers on legalization, the new survey suggests there’s even greater support for ending the consequences of past convictions for nonviolent crimes—whether cannabis-related or not—provided individuals complete the terms of their sentences and do not commit another crime. Past convictions can impede individuals’ efforts to get jobs, find housing, or further their education. 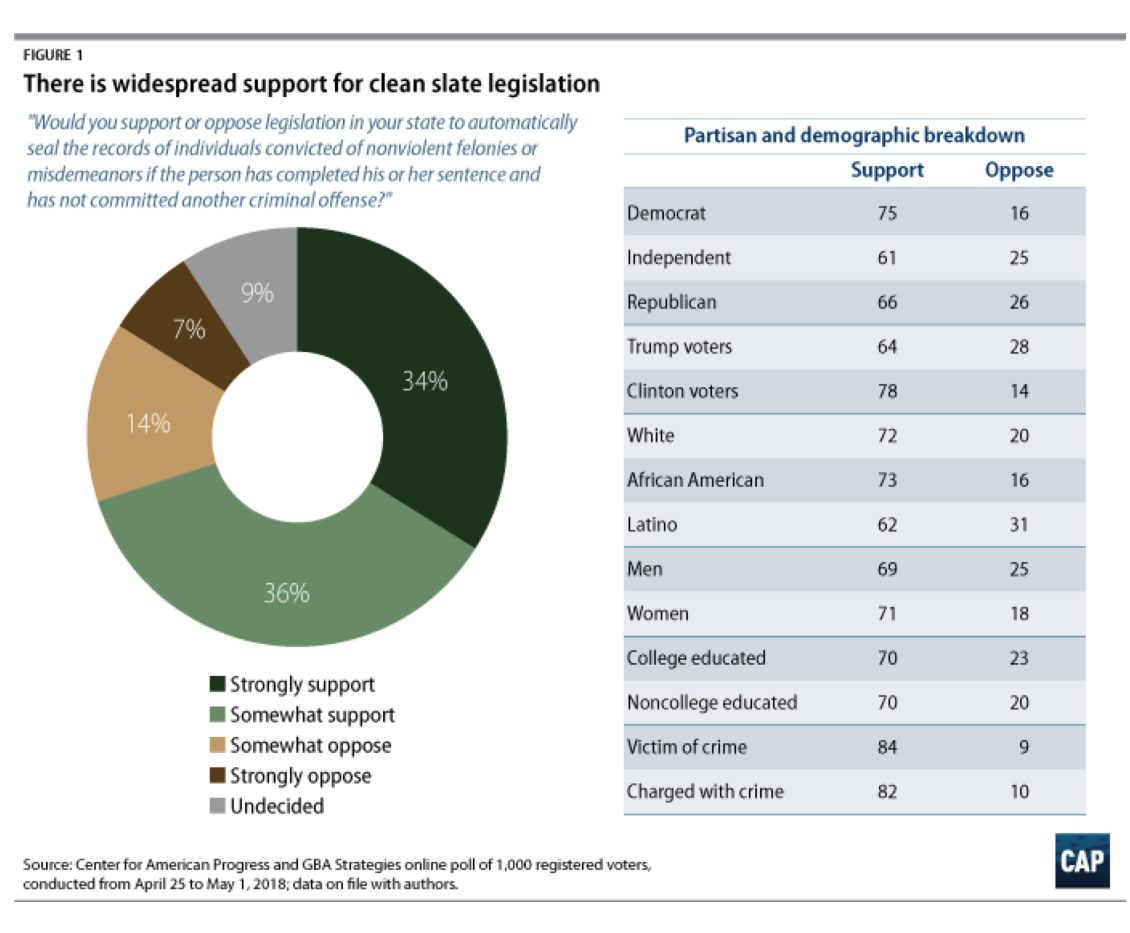 The poll found bipartisan support for clean slate legislation, with 75% of Democrats, 66% of Republicans, and 61% of independents in favor. A majority of people across racial and gender lines also support such steps.

The group that most strongly supported sealing records were actually victims of crimes, 84% of whom said they favored the policy.

A sizable percentage (82%) of respondents who had been charged with a crime said they supported clean slate legislation. But perhaps more notably, of those surveyed for the poll, the group that most strongly supported sealing records were actually victims of crimes, 84% of whom said they favored the policy.

“American voters are ready to move forward with this important legislation,” the survey’s authors write, “and politicians should take their lead and bring clean slate to fruition to help nonviolent offenders move on with their lives and successfully reintegrate into American life.” 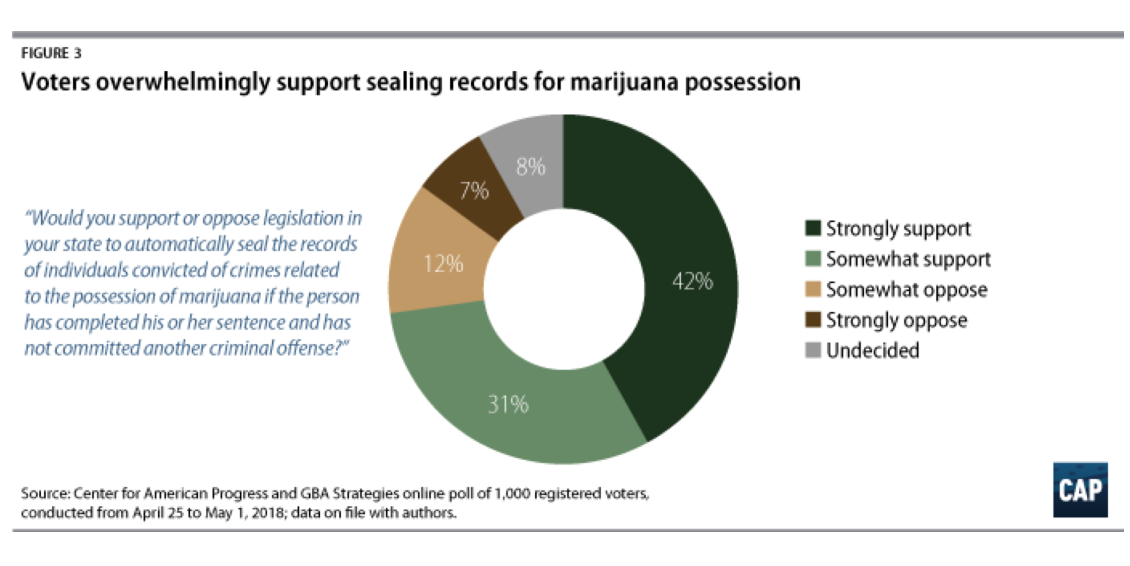 In terms of cannabis possession specifically, an even greater number (77%) of respondents said they favor automatically sealing criminal records. Notably, 54% of those who said they oppose cannabis legalization nevertheless support clean slate policies.

“Why do people support this idea?” the survey asks. “Fifty-one percent of those backing the clean slate proposal say that the best reason to support the idea is that it ‘would help people with criminal records move on with their lives, provide for their families, and become productive members of society.’ This reason for support far outstrips other arguments regarding safety and values.”

Cannabis Legalization Not a Partisan Issue 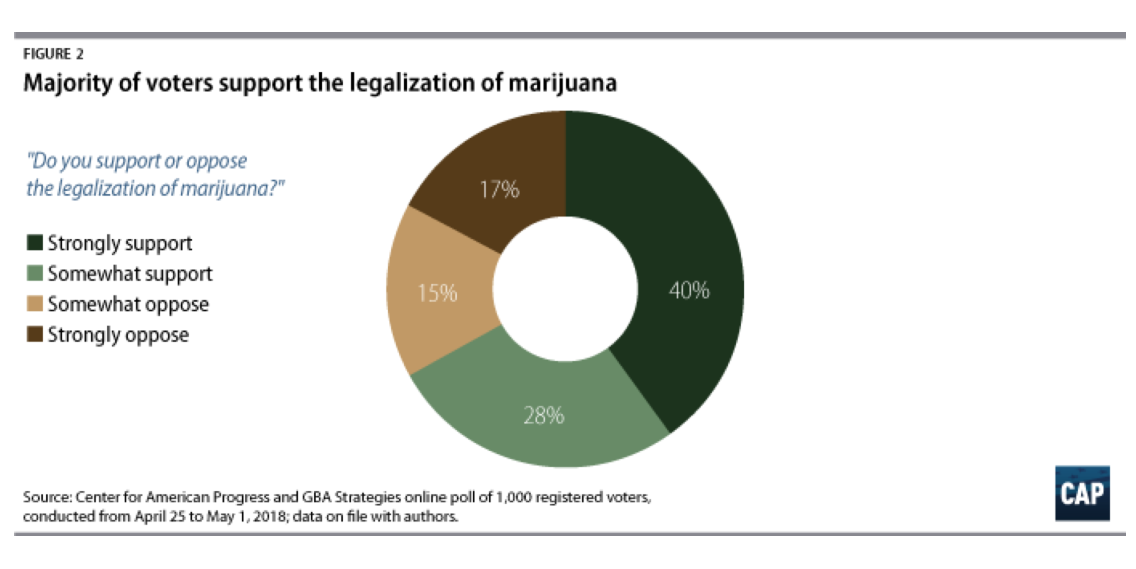 Across party lines, cannabis is now a winning issue among voters, the poll found, with 68% of respondents in favor of legalizing and 40% who “strongly” support the proposal.

“In an era of increasing partisanship, public support for ending cannabis criminalization is an issue that crosses party lines,” NORML Deputy Director Paul Armentano said Wednesday in a statement about the poll. “More and more, elected officials – and those who wish to be elected – must acknowledge that advocating in favor of marijuana policy reform is a political opportunity, not a political liability.”

Among political parties, 77% of Democrats, 62% of independents, and 57% of Republicans supported legalization. In terms of gender, more women (69%) than men (66%) said they were in favor. And across racial lines, legalization was backed by 72% of African Americans, 69% of whites, and 64% of Latinos.

“Voters across partisan and demographic lines strongly support these measures,” the poll’s authors conclude, “and political leaders who push for these measures should feel confident that voters will reward them for their efforts.”