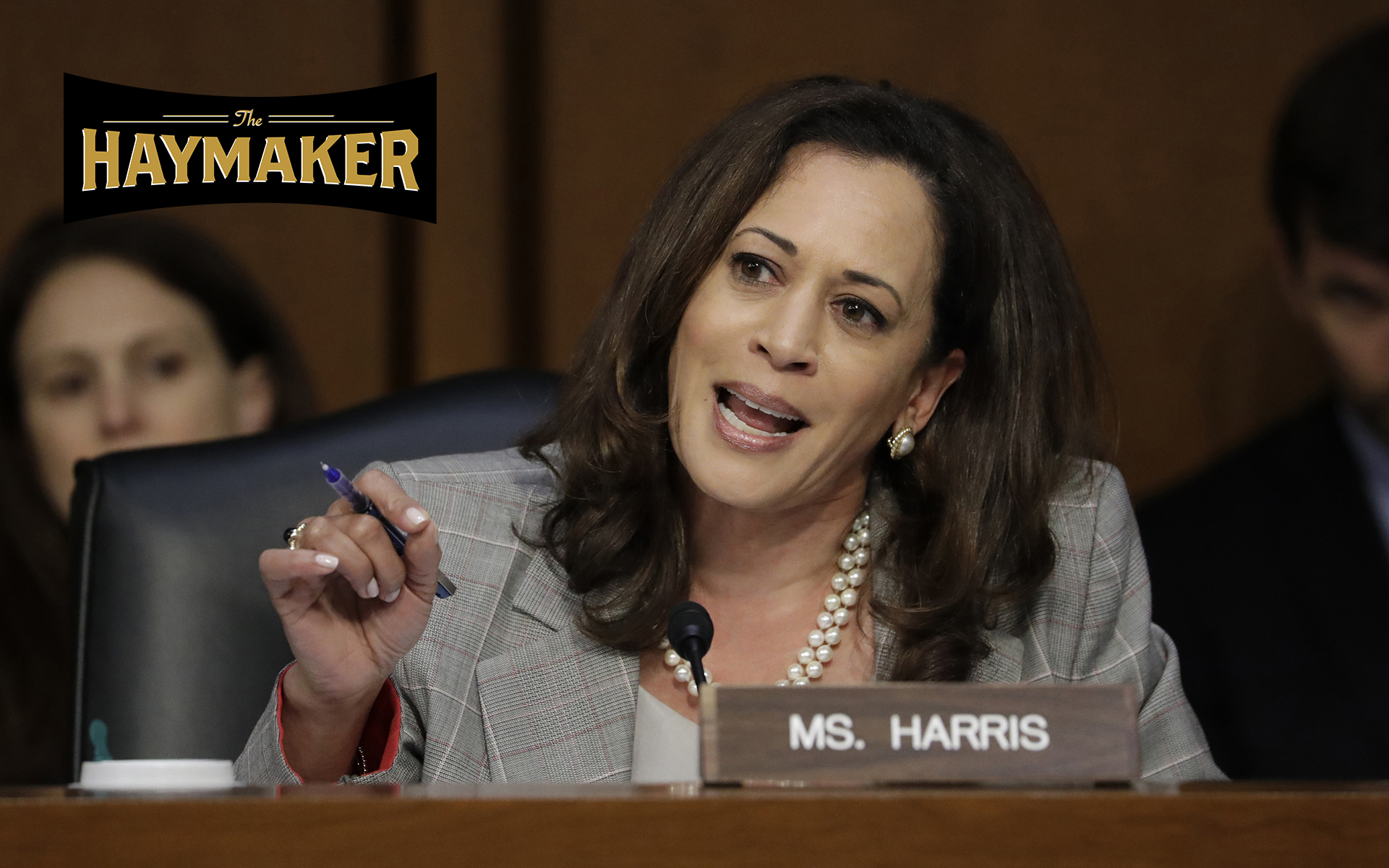 Sen. Kamala Harris, D-Calif., questions Attorney General Jeff Sessions testifies before the Senate Select Committee on Intelligence about his role in the firing of FBI Director James Comey and the investigation into contacts between Trump campaign associates and Russia, on Capitol Hill in Washington, Tuesday, June 13, 2017. (AP Photo/J. Scott Applewhite)

Talk is cheap. In Congress it goes for pennies on the pound.

In the days following Attorney General Jeff Sessions’ decision to rescind the Cole memo, politicians around the country raised their voices in outrage.

Many have spoken out against Jeff Sessions. But who has acted? We tallied the votes.

Governors, state attorneys general, and members of Congress issued statements and tweets about states’ rights. They pledged to protect adult-use laws and the rights of medical patients.

But who has acted? Almost no one, so far.

In fact, a number of senators who expressed a burning desire to halt Sessions and his cannabis-hating crusade in its tracks have not so much as signed on as a co-sponsor of any of the four major pieces of legislation addressing the issue in the US Senate. As of mid-January, one of the most powerful bills—Sen. Cory Booker’s Marijuana Justice Act—had only a single co-sponsor, Oregon Sen. Ron Wyden.

The four Senate bills currently treading water in the upper chamber are:

Especially glaring: California Sen. Kamala Harris, the rising Democrat representing a state with more than 47,000 jobs tied to legal cannabis. California’s senior senator, Dianne Feinstein, is notoriously anti-cannabis and not expected to change anytime soon. So the actions of Harris may be critical in terms of safeguarding an industry worth an estimated $2 billion to $5 billion. Among legalization advocates, Harris was trending as a political target on Twitter this past week:

Is Senator Kamala Harris Sincere About Supporting Marijuana Reform? She has yet to cosponsor any reform bills like other Senate Dems have. https://t.co/UYx4tRQOPW

I’ve compiled a table of senators from the eight legal adult-use states, their public words on the Sessions move, and their actions in the senate, below. 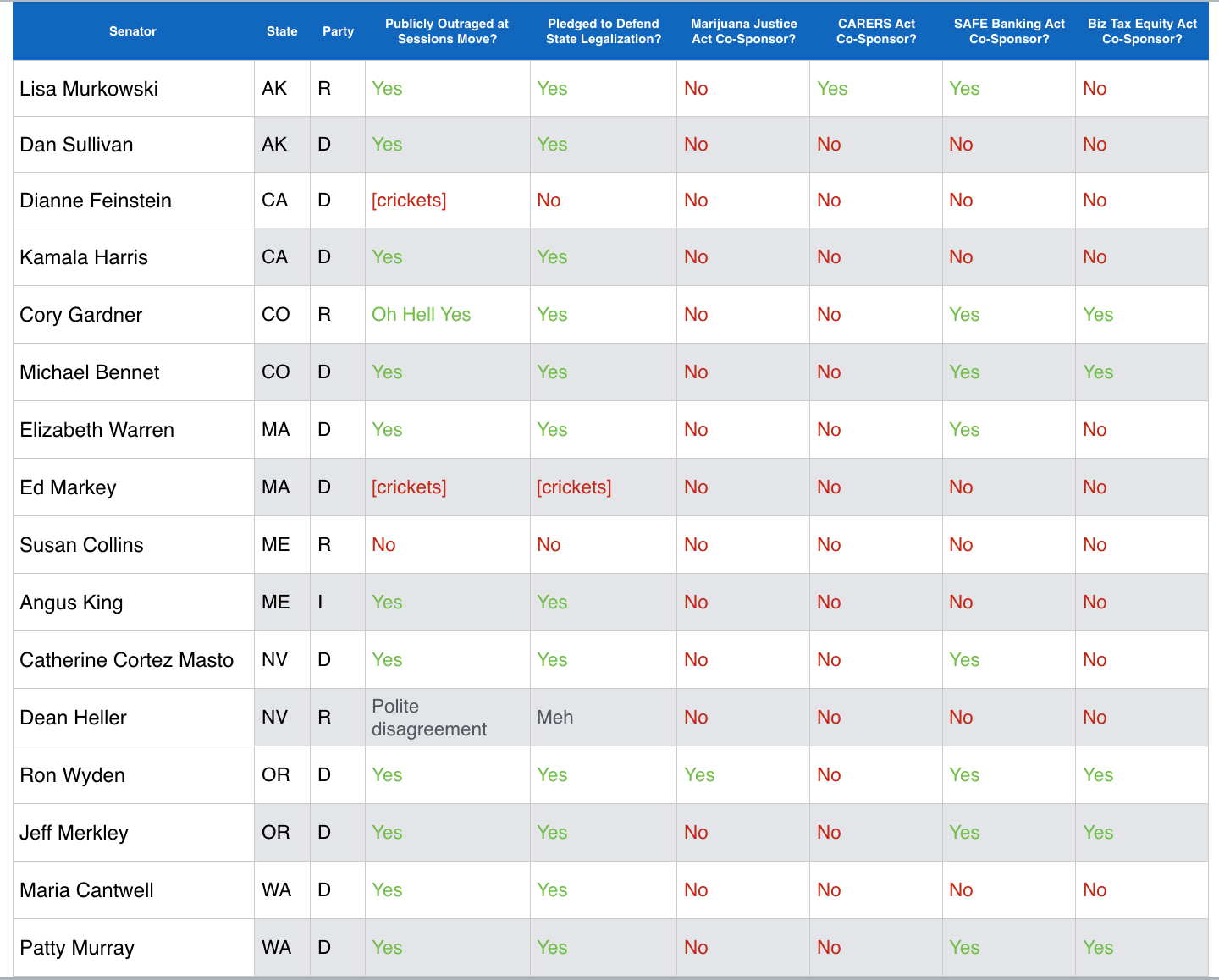 It’s Not Just the Legal States

Surprisingly, much of the support for the Senate’s leading cannabis measures comes from elected officials who don’t represent adult-use states. Some come from states where medical cannabis is legal. Some, like Rand Paul (R-KY) and Mike Lee (R-UT), hail from places where nearly all forms of cannabis are highly illegal.

And some, like Sen. Chuck Schumer of New York, talk a big game but so far have delivered big fat zeroes when it comes to co-sponsorship of cannabis bills.

Senators from Other States:

Who’s Acted on Their Convictions?

I do have a roll of honor, though it’s a short one. The senators with the strongest record of standing up for patient protections, states’ rights, and the cannabis industry are:

Notice anything odd? Yes: There are both Republicans and Democrats on the honor roll. Cannabis is a bipartisan issue.

I urge you to call the members of Congress from your state and ask them what they’re doing this week to support and protect state cannabis laws.