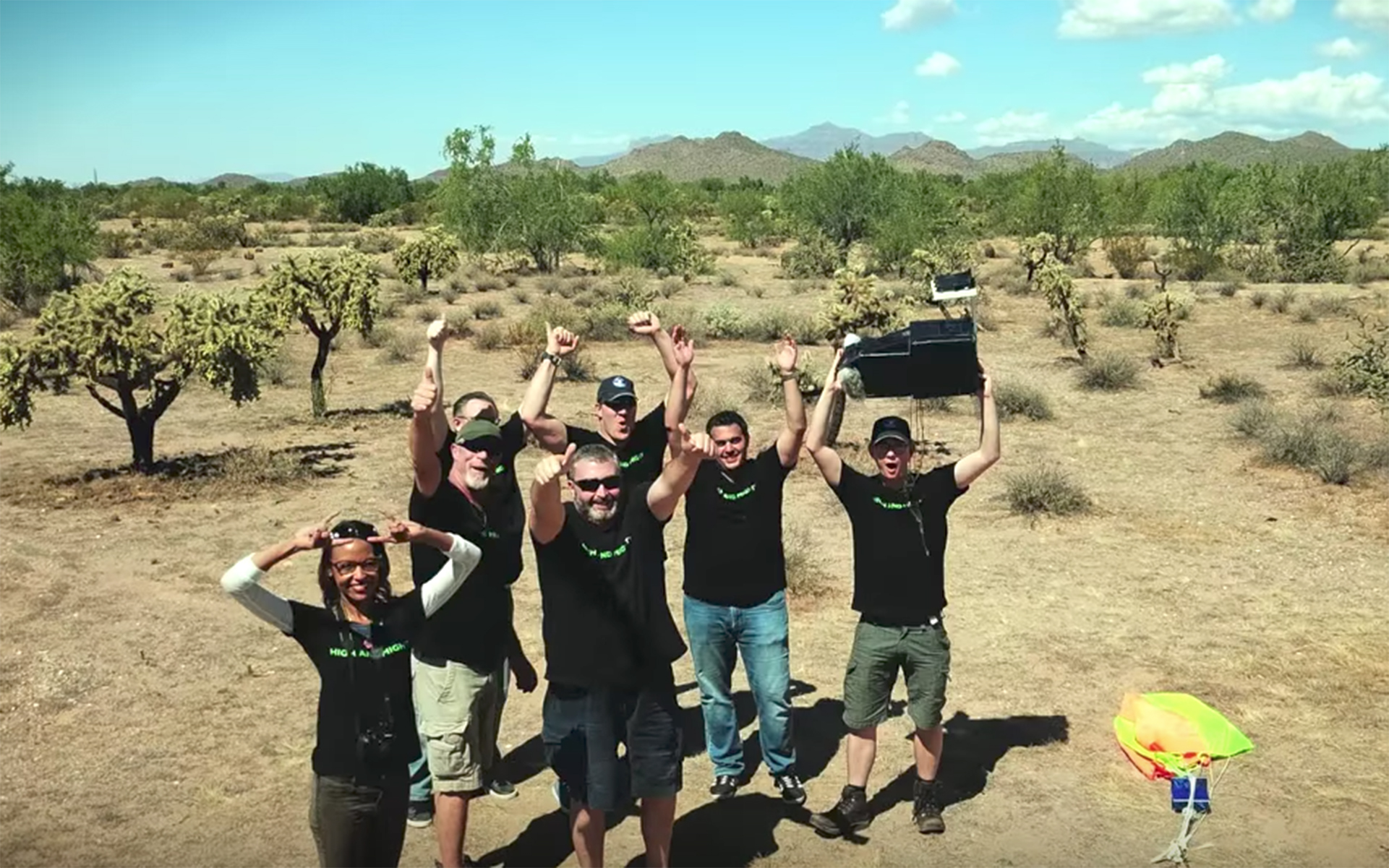 (Courtesy of Herban Planet)
A cannabis experiment of galactic proportions took place over Phoenix, Arizona, in a daring and unusual feat in an effort to answer the age-old question: What happens when you send cannabis into space?

Herban Planet teamed up with Scottsdale cannabis dispensary Level Up for a foray into the unknown. The group packaged up one pound of top-quality Thin Mint GSC (f.k.a Girl Scout Cookies) to send into the upper stratosphere.

Enlisting the services of Sent Into Space, a company that specializes in—you guessed it—sending stuff into space, Herban Planet worked with Sent Into Space co-founder Dr. Chris Rose, Ph.D., to ensure that all proper measures were in place for the experiment to be a success. Leafly spoke to the leaders of this astronomical project to hear more about what they were looking to accomplish and what exactly happens when you blast marijuana up among the stars.

The Team Behind the Idea 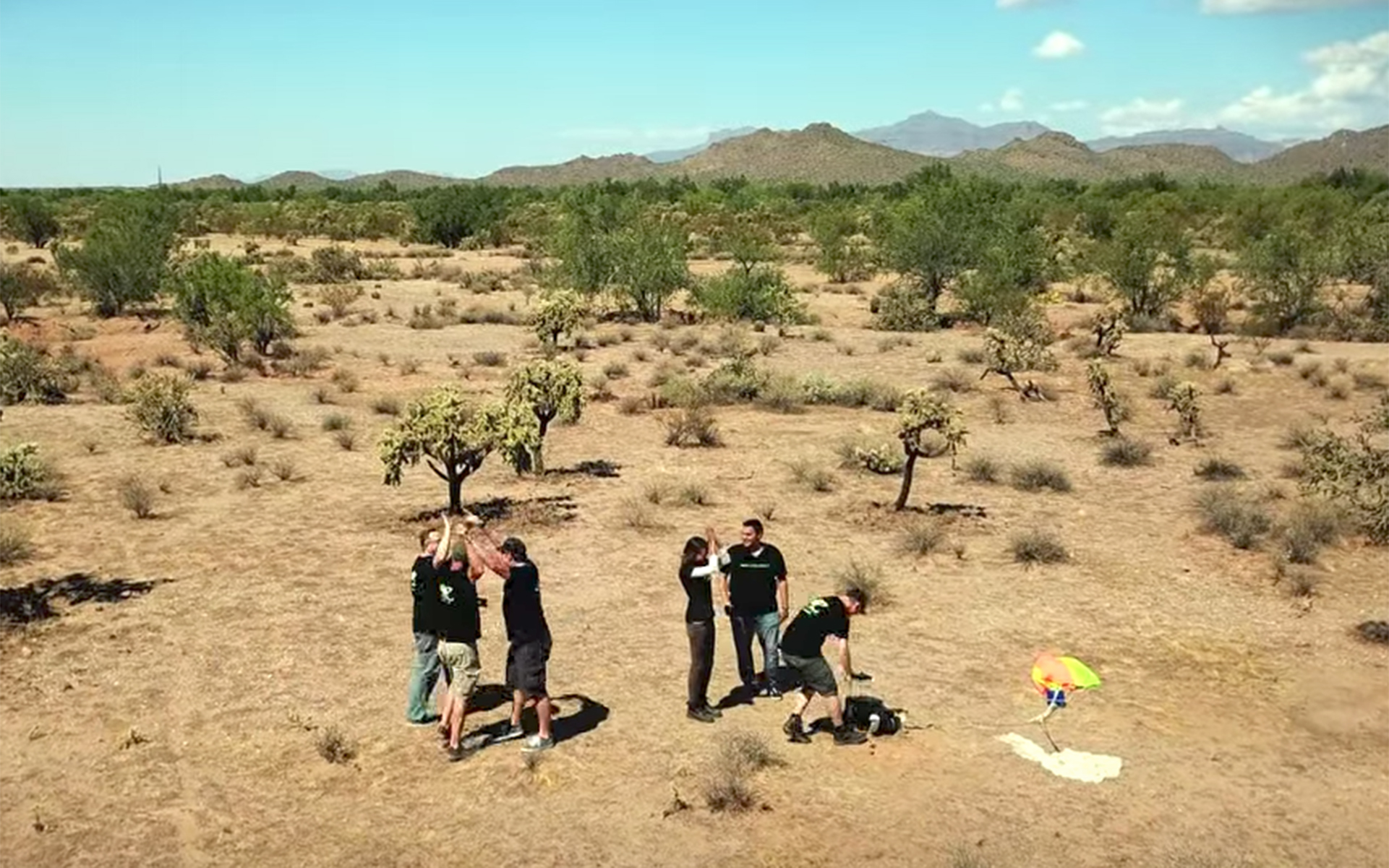 Tagan Dering is the Chief Product Officer for the company Herban Planet, which he described as a “full ecosystem” for the cannabis community, including education, news, a glossary, and more. “We’re just coming to market, so everybody got together and said, ‘What can we do to make a big splash?’ and let everybody know, ‘Hey, we’re here!’” he recalled. “And somebody had the idea: What if we send marijuana into space?”

Dering reflected back on the brainstorm that led to the space venture. “We talked about it and did some engineering, and before we knew it, we sent a pound of marijuana up into space!” he said.

Herban Planet devised the concept of Space Weed Bro—cannabis that is literally out of this world. “We’re not a dispensary, so we never took custody of the cannabis. That’s really important” from a legal perspective, Dering explained.

“Level Up came to the site, they stayed with the product the entire time, [and] they chased it down with us. None of our people even touched the product,” he said. “All of the packaging and stuff came in today, and Space Weed Bro goes on sale starting Monday.”

Dr. Rose of Sent Into Space introduced himself and his company as the “Near Space Experts,” having devised an entire business model behind sending objects, plants, organic matter, food, and even a spliff sponsored by Viceland into the upper atmosphere. This experiment will be slightly different, however.

The Science Behind the Experiment 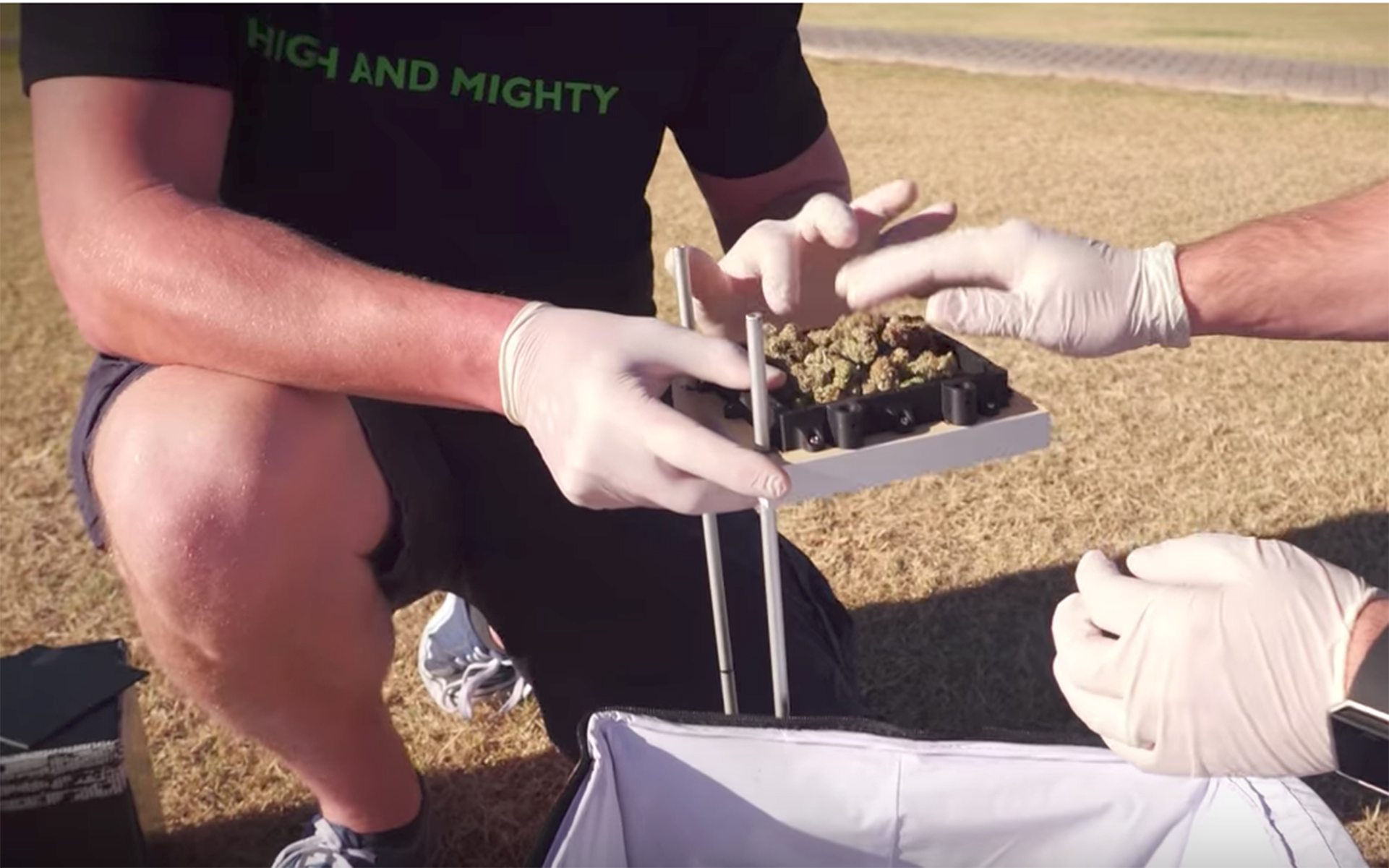 Talking a mile a minute, Dr. Rose described the various possible changes his team hopes to measure in the cannabis that made the perilous journey into temperatures as extreme as -94 degrees Fahrenheit.

“We’re very interested to take a look at and see just what effect these adverse conditions had on the marijuana.”
Dr. Chris Rose, Ph.D., co-founder of Sent Into Space

“We are sending things into adverse conditions that aren’t found on Earth,” he explained. “We’re very interested to take a look at and see just what effect these adverse conditions had on the marijuana. It could be that the exposure to additional UV has had an effect, the solar radiation could certainly have had an effect, the blast freezing by temperature, above the atmosphere could have had an effect—all things that we intend to use the technology at our disposal to try and divulge.”

Dering chimed in, “He’s going to come back, take some samples, take it back to the lab, and test it to see if the molecular structure changed.”

In the video of the experiment (embedded below), you can see the condensation build up on the inside of the glass cube housing the cannabis. As the sample floats further and further up, the condensation crystalizes in the extreme conditions.

Dr. Rose described the testing processes that the space weed will undergo to determine molecular structure changes. “The first would be to look at a visual change, so we would use a scanning electron microscope to essentially do what a conventional microscope can’t,” he said. “A scanning electron microscope uses very powerful magnets to deflect light down, which essentially lets us look down to almost the atomic level.”

“Secondly, what would be really interesting is to take what is called an Edx or a bromine test,” Dr. Rose added. “It uses the scanning electron microscope to focus on an area and fire a concentrated beam of ions at it. An ion is an atom that has had electrons removed from it, and it’s firing at, say, one of the crystals or the core structure of the marijuana. What we then do is we barrage it on a very small scale. We measure the energy of the electrons that are picked out.”

“You’re probably wondering why we do this,” he elaborated. “The reason is because we can analyze what gets picked off. We can get a fingerprint, a DNA structure, if you like, that tells us in graphical form and hard data what is physically different about this marijuana [compared to] the marijuana that hasn’t been sent into space.”

The Cannabis Taxonomy Debate: Where Do Indica and Sativa Classifications Come From? 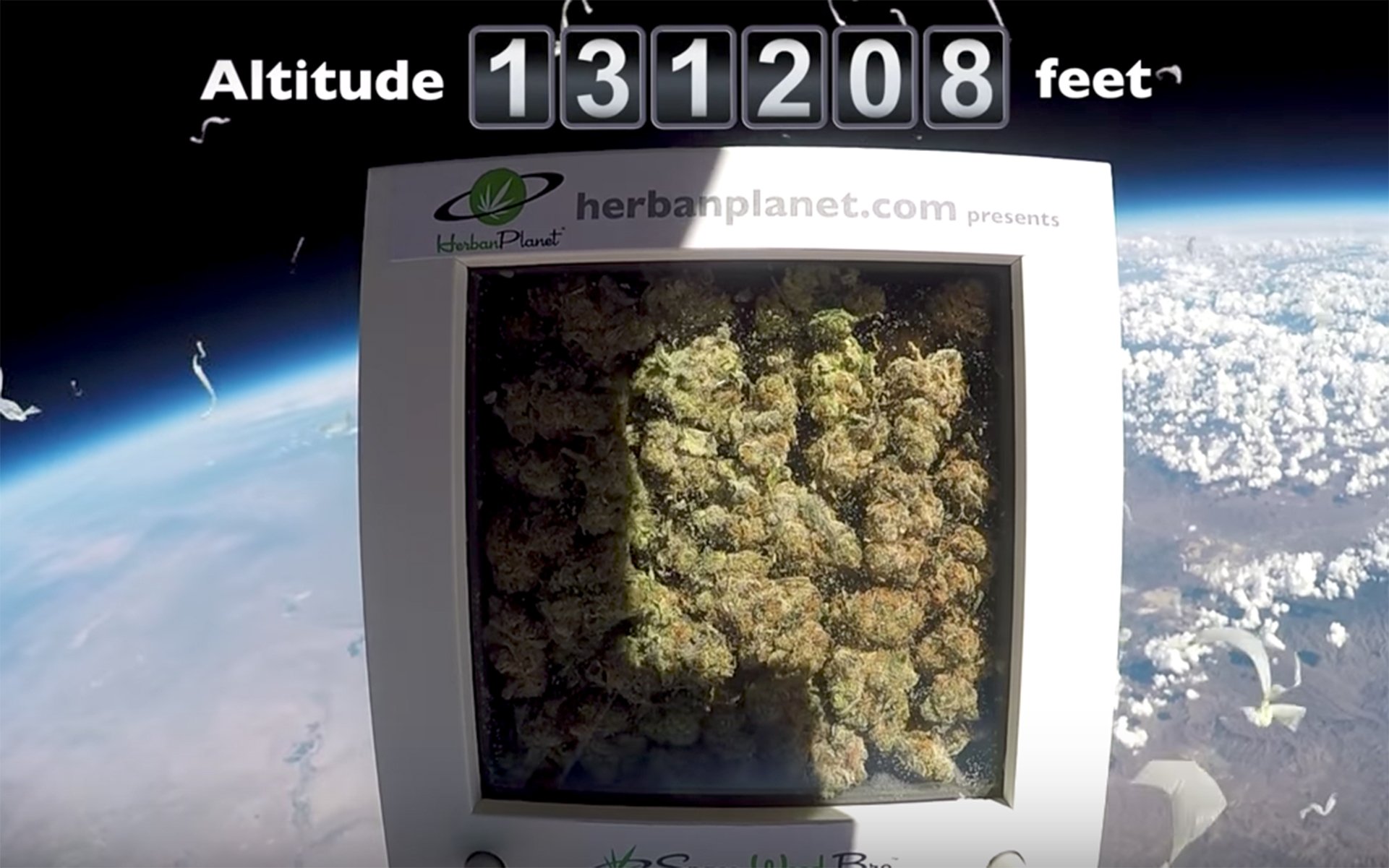 After multiple trial runs, the team set up its equipment outside of Phoenix, Arizona. The point of entry into space is technically considered 19.2 kilometers (11.9 miles) above Earth, but this cosmic team was determined to reach even further out into the universe.

Using an inflated weather balloon with GPS to provide lift, these amateur cosmonauts sent one pound of premium Thin Mint GSC (f.k.a Girl Scout Cookies) cannabis from Phoenix all the way up to 32 kilometers (19.8 miles) above Earth. The team tracked the clear glass cube and documented the entire event, from launch to space entry and its long descent back into the desert via parachute.

The video crew had an onboard camera strapped to the cannabis package, as well as various drones and ground video crews to ensure that the historic event was captured completely.

At 131,208 feet, or 32 kilometers (19.8 miles), the meteorological balloon finally exploded from the pressure in the vacuum of space, sending the box of cannabis plummeting back towards Earth. The team tracked the package, following the GPS into the middle of the Arizona desert, where the crew retrieved the galactic ganja.

The results of this experiment will likely take at least a month to process, but in the meantime, the first cannabis to get intergalactically, out-of-this-world high, Space Weed Bro, will be available exclusively at Level Up dispensary in Scottsdale, Arizona. 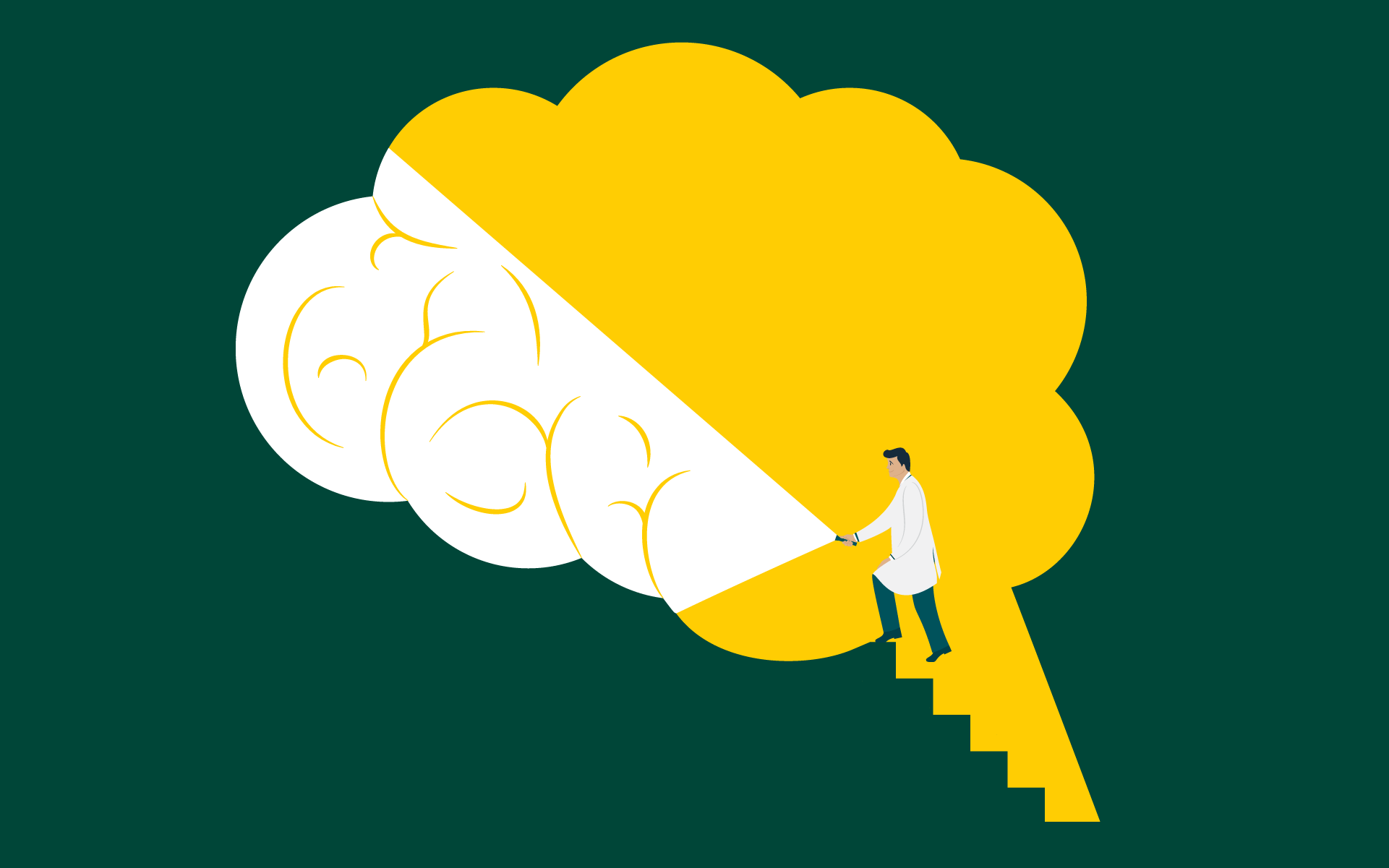 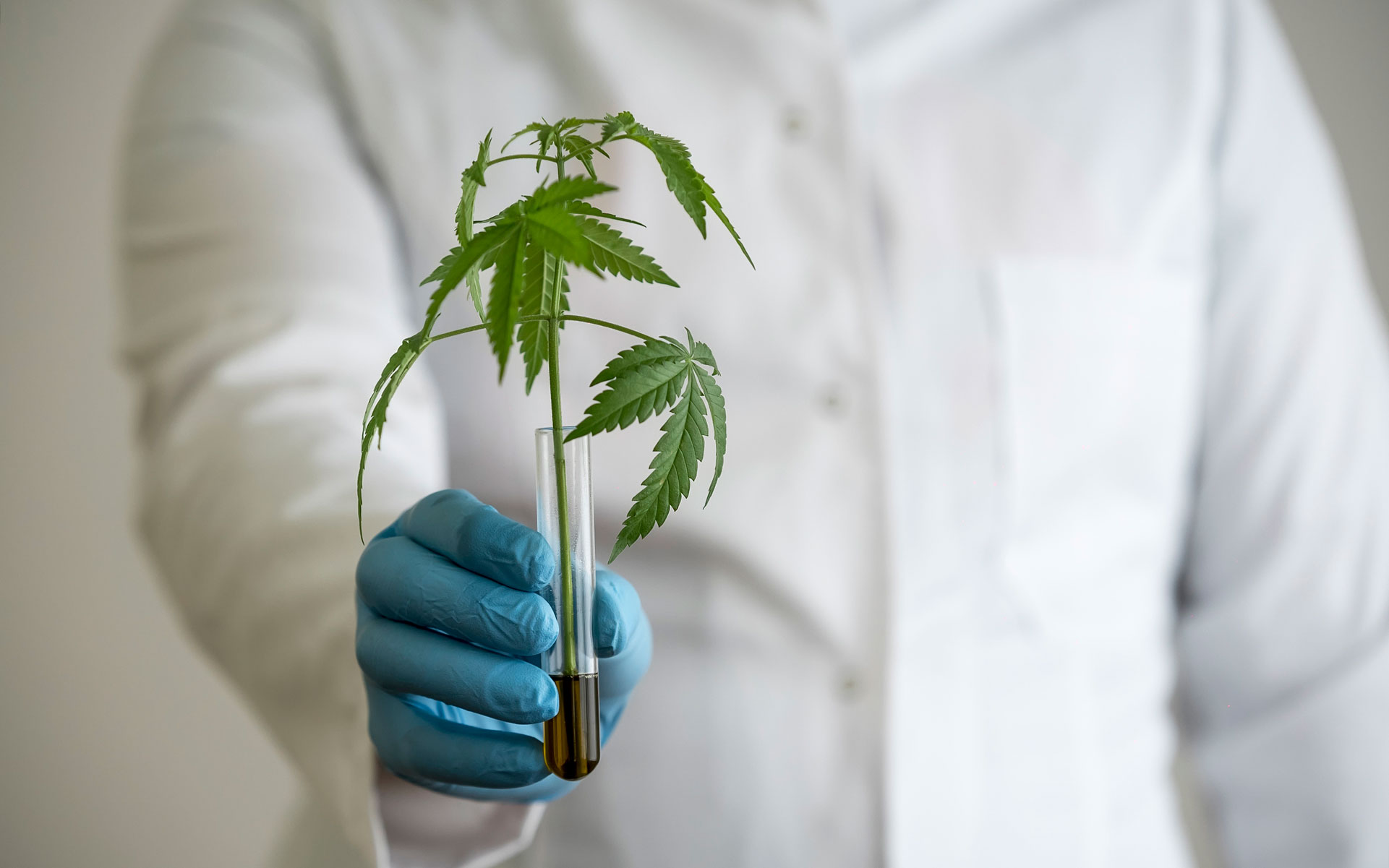 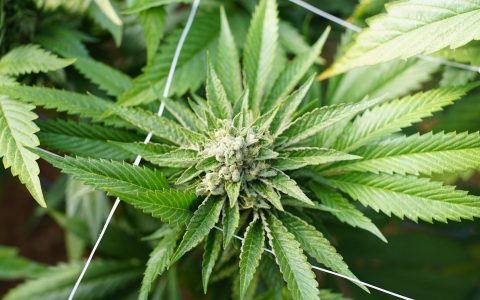 How Does Lab Testing for THC and CBD Work? 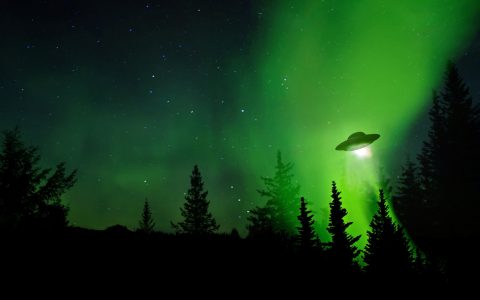 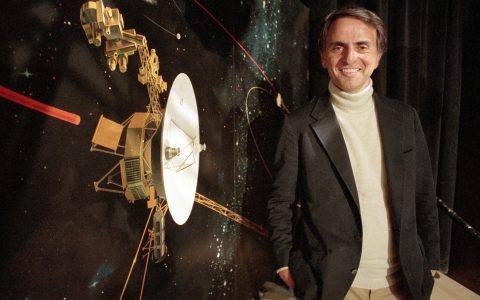 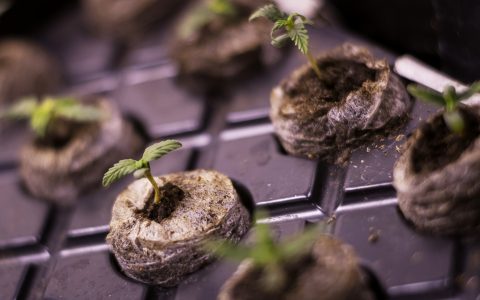 Why Strains Have THC and CBD Limits