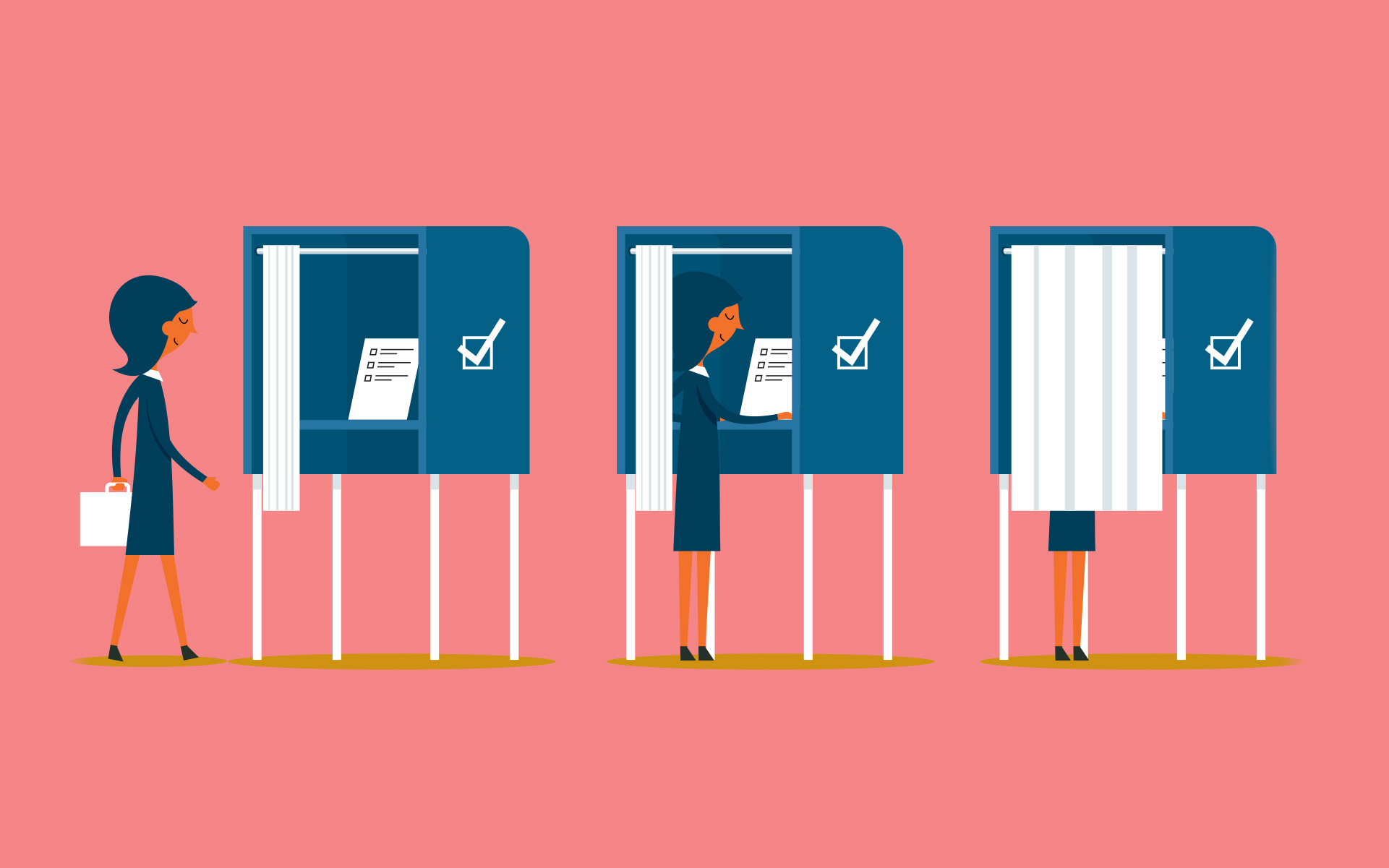 Quebec's Oct. 1 election is expected to result in a reshuffling of government. And cannabis could be the biggest loser. (sorbetto/iStock)
With less than a week to go ahead of the Quebec provincial election, those keeping track of cannabis politics in Quebec have a lot to consider.

Quebec is set to begin adult-use legalization—in just over three weeks—with the nation’s most austere provincial cannabis laws. But opposition party Coalition Avenir Québec (CAQ) wants to crack down even further on cannabis—and they’re poised to take power in the Oct. 1 provincial election.

Use Leafly's Finder Tool to Locate It in Canada

In the leadup to legalization, Quebec has defied its libertine reputation with a puzzling popular hostility to cannabis.

53% of Canadians support legalization. Only 39% of Quebeckers support it. And the CAQ really doesn't approve.

One Environics survey found that only 39% of the province’s residents support legalization, compared with 53% of those in the rest of Canada. Some have suggested Quebec’s rejection of cannabis has been caused in part by the province’s primarily French-language media not reporting on the success of legalization in American states like Colorado, Washington, and California.

The Globe and Mail’s Konrad Yakabuski made the plausible argument that older Quebeckers, rightly or wrongly, associate cannabis with biker gangs and their bloody mid-1990s war for control of the drug trade. During that period, more than 80 bombs were detonated and 162 bikers were killed in bombings and shootings across the province.

Whatever its source, Quebec’s cannabis scepticism was something the centrist Liberal government strove to echo in the begrudging tone it brought to all discussion of legalization. Announcing that the National Assembly had passed legalization Bill 157, Public Health Minister said, “Quebec has positioned itself and will be ready for the legalization of cannabis this summer and which, I repeat, has been imposed by the federal government.”

The Liberals were well aware that their opponents, the conservative CAQ, were gaining on them. CAQ leaders were finding traction with an even more hostile approach to legalization.  They described their policy as “a hard line” in order “to limit the perverse effects of cannabis use.”

The CAQ’s approach to cannabis was, from the beginning, designed to “deliberately combat consumption of this drug […and] restrict marijuana use as much as possible.” As a result, the Liberals’ Bill 157 reflected as conservative an approach to cannabis as they could manage.

Yes, Bill 157 applied the provincial age of consumption for alcohol (18) to cannabis, and allows cannabis smoking wherever cigarette smoking is allowed, which is widespread in a province once known as “Canada’s smoking section.” But not only did the Liberals ban home growing (under confusing circumstances, as I reported in May), they also made Quebec the only province in the country to set a limit on how much cannabis a person can possess at home—150 grams per residence, regardless of the number of adults who live there.

'I don’t want as premier of Quebec to send the signal that it’s normal to consume cannabis below the age of 21.'
CAQ leader François Legault

Though the CAQ and its leader François Legault have lost significant ground in the past month, particularly during leaders’ debates, the party remains poised for some kind of victory next week. With that would come the CAQ’s long-promised commitment to overhaul Quebec’s cannabis framework to make it even more severe—beginning with raising the age of consumption to 21, two years older than anywhere else in Canada.

“Many doctors are telling us it’s proven that a young person who starts consuming cannabis too young has a real risk of ending up with schizophrenia,” Legault said in August. “I’ve seen this with my son’s friends. The brain isn’t fully developed in young people and we have to be careful.”

“Young people from 18 to 21 will go on the black market to buy cannabis,” he said, “but I don’t want as premier of Quebec to send the signal that it’s normal to consume cannabis below the age of 21. […] It’s terrible what cannabis can do to youth.”

Quebec Wants to Ban Homegrow. Is It the Will of the Voters or Vested Interests?

Beyond the age limit, the CAQ’s full approach to cannabis is equally severe. Unsatisfied with the Liberal government’s 150-gram limit per-residence, CAQ leaders intend to reduce total possession per-residence by 90%, to 15 grams. 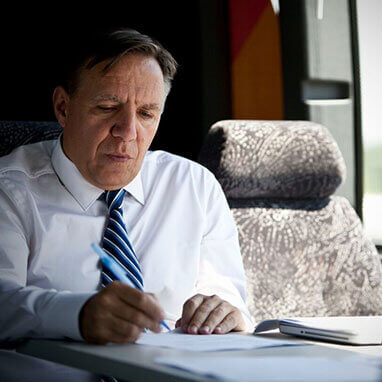 Legault intends to ban cannabis smoking in public, while continuing to allow tobacco smoking. The party also wants to ban cannabis by default in condominiums and co-owned properties, unless owners agree to allow it.

Former Montreal Police turned CAQ candidate spokesperson Ian Lafrenière said if Quebeckers live in buildings where landlords—or their own owners’ associations—prohibit cannabis, they would have to find another place to live.

The province’s other major party, the centre-left Parti Québécois, has sunk from its former position as the opposition to third place. Its stance on cannabis is similar to that of the Liberal government, except they support a public ban on cannabis use, and remain open to Quebec residents growing up to two plants.

The rest of the PQ’s cannabis platform is nationalistic in aim. They wish to make certain Quebec’s supply of adult-use cannabis comes only from producers based in Quebec. This despite the fact that Quebec, the second largest province, has only nine licensed producers at present, compared with 63 in Ontario. As well, all cannabis tax revenue under a PQ government would go to fund addiction treatment and public health services.

Quebec's cannabis activist party, the Bloc Pot, is not expected to exceed 1% of the vote.

The fourth party, left-wing Québec Solidaire, has enjoyed a boost in support following the leaders’ debates, during which the leaderless party’s co-spokesperson Manon Massé won over viewers with her plain-spoken manner.

QS’s platform is based in principles of harm reduction, including decriminalization of all drugs, applying the same rules to cannabis as to alcohol and tobacco, introducing a normalized sobriety test for roadside stops, and educating the public about risks associated with impairment. QS supports home growing because they believe it would allow Quebec to avoid production cartels that benefit “former ministers of the federal Liberal party.”

Cannabis activist-party Bloc Pot is also fielding several dozen candidates, though it has never exceeded 1% of the popular vote in its 20-year history. Québec Solidaire and the Parti Québécois are doing far better, but neither is polling with numbers that would make even a minority government seem within reach.

First Time for the CAQ in Power

The next government is expected to be formed by the Liberals, who have held power for 14 of the last 16 years, or the Coalition Avenir Québec, which has never formed a government in its six years of existence. (The CAQ’s previous incarnation, as the populist-conservative Action Démocratique Québec, had an 18-year history prior to becoming the CAQ, but did not form a government during that time.)

The 2018 election will, of course, turn on a variety of issues, and for most voters cannabis is a low priority. But a week from now the cannabis sector—and both medical and recreational cannabis users—will nonetheless have to live with the election’s consequences.

Other provinces have seen their cannabis plans completely upended by the installation of a new government. In Ontario, the election of Doug Ford resulted in the scrapping of that province’s cannabis scheme, which was overhauled from a government-run system to a private-retail scheme. If indeed Quebec elects the CAQ, the effect on this province’s relationship with cannabis (and the success of its cannabis businesses) could be similarly profound.

Prepare Yourself. Legalization Is Coming.

Learn all about cannabis strains