Facebook Has a Cannabis Problem That ‘Community Standards’ Don’t Solve

Bruce BarcottApril 24, 2018
Share
Share on Twitter   Share on Facebook
Print
(Andrew Harnik/AP)
Facebook’s release earlier today of new community standards meant to govern how people use the service raised a question in the cannabis world: Will the guidelines help our social media accounts?

The short answer is no.

“We want to give people clarity,” says a Facebook executive. But what's clear is that the company has an outdated understanding of cannabis law.

“We want people to know our standards, and we want to give people clarity,” Monika Bickert, Facebook’s head of global policy management, said in an interview with the Washington Post. She added that she hoped publishing the guidelines would spark dialogue. “We are trying to strike the line between safety and giving people the ability to really express themselves.”

Two years ago Facebook engaged in a highly publicized campaign to remove cannabis-related posts and accounts from some of the industry’s most-recognized brands, including Oakland’s Harborside Health Center, edibles maker Dixie Elixirs, Boulder dispensary The Farm, and media company MassRoots.

Although the publicity surrounding the great cannabis purge of 2016 has died down, plenty of companies still find their accounts deleted without warning.

Mauria Betts, owner and creative director of Potency, a cannabis-focused branding and marketing agency based in Portland, OR, told Leafly that “most of our clients have been dealing with” Facebook’s murky rules for many years. “We’ve had clients with [Facebook] accounts that have been shut down with no notice,” she said.

As a result, Betts said her firm uses social networking sites to develop a brand’s story and aesthetic while playing down specific photos and mentions of cannabis. “There’s still an opportunity to use Instagram and Facebook,” she said, “to promote a company’s values, and let consumers know what makes them different.”

The newly public standards fall short of Bickert’s stated desire to give users clarity, however. The guidelines are vague and general, and seem to function more as guidance for Facebook employees who appraise accounts and decide who stays and who goes.

“I’ll give them credit,” said Lauren Gibbs, the founder of Rise Above Social Strategies, a marketing firm that specializes in the cannabis space. “These standards are far more detailed than anything I’ve seen in the past.”

At a time when Facebook is facing scrutiny from regulators and the public alike, “it’s good that they’re taking this moment to reassess a lot of things,” Gibbs said. “I see that they’ve expanded their articulated views on firearms, bullying, and child safety.”

“But I continue to be baffled by how Facebook is treating cannabis,” Gibbs added. “More than half the states now have legal marijuana in some form, and yet [Facebook is] continuing to restrict that content.” Reading through the community standards document with an eye toward cannabis, she said, “is pretty confusing.”

Why is Cannabis In This Category?

Take, for instance, a section titled “Violence and Criminal Behavior.” The guidance explains that Facebook does not allow accounts and postings from organizations or individuals who are engaged in:

Before proceeding any further, Lauren Gibbs has a point to make. “It is worth noting that marijuana is still addressed as a subsection under the category of ‘violence and criminal behavior,’” she said.

When it comes to cannabis, that last item on the above list—“criminal activity”—is worrisome. In the eyes of Jeff Sessions and the DEA, any organized activity having to do with cannabis is criminal. In more than half of US states, though (and soon, all of Canada), it’s not a crime at all depending on who possesses it. A photo of an adult cannabis enthusiast holding an ounce of cannabis is now perfectly legal in California. In Idaho, that same photo could act as evidence of criminal activity.

“We also remove content that expresses support or praise for groups, leaders, or individuals involved in these activities,” the guidebook explains.

Again, it’s hard to know how to interpret that when it comes to cannabis. If a customer gives a shout-out to the budtenders at The Farm in Boulder, will they come under scrutiny for praising individuals involved in what’s still technically a federal crime? Facebook doesn’t say.

Also problematic: “We also do not allow people to depict criminal activity or admit to crimes they or their associates have committed,” says the guidebook.

On the other hand, Facebook does “allow people to debate or advocate for the legality of criminal activities, as well as address them in a rhetorical or satirical way.”

Careful With That Wedding Photo

That’s a fine line to draw, said Lauren Gibbs of Rise Above.

“Most depictions of marijuana in social media are advocating for the legalization and normalization of marijuana,” she said. “I’ve chosen to share pictures on Facebook of myself consuming marijuana. I view that as an advocacy decision, because that’s a way to normalize and advance the cause. I have pictures of me smoking marijuana at my wedding! That’s a very intentional choice.

And yet this is an area that commonly gets a lot of people shut down. It’s viewed by Facebook as ‘publicizing a crime.’” 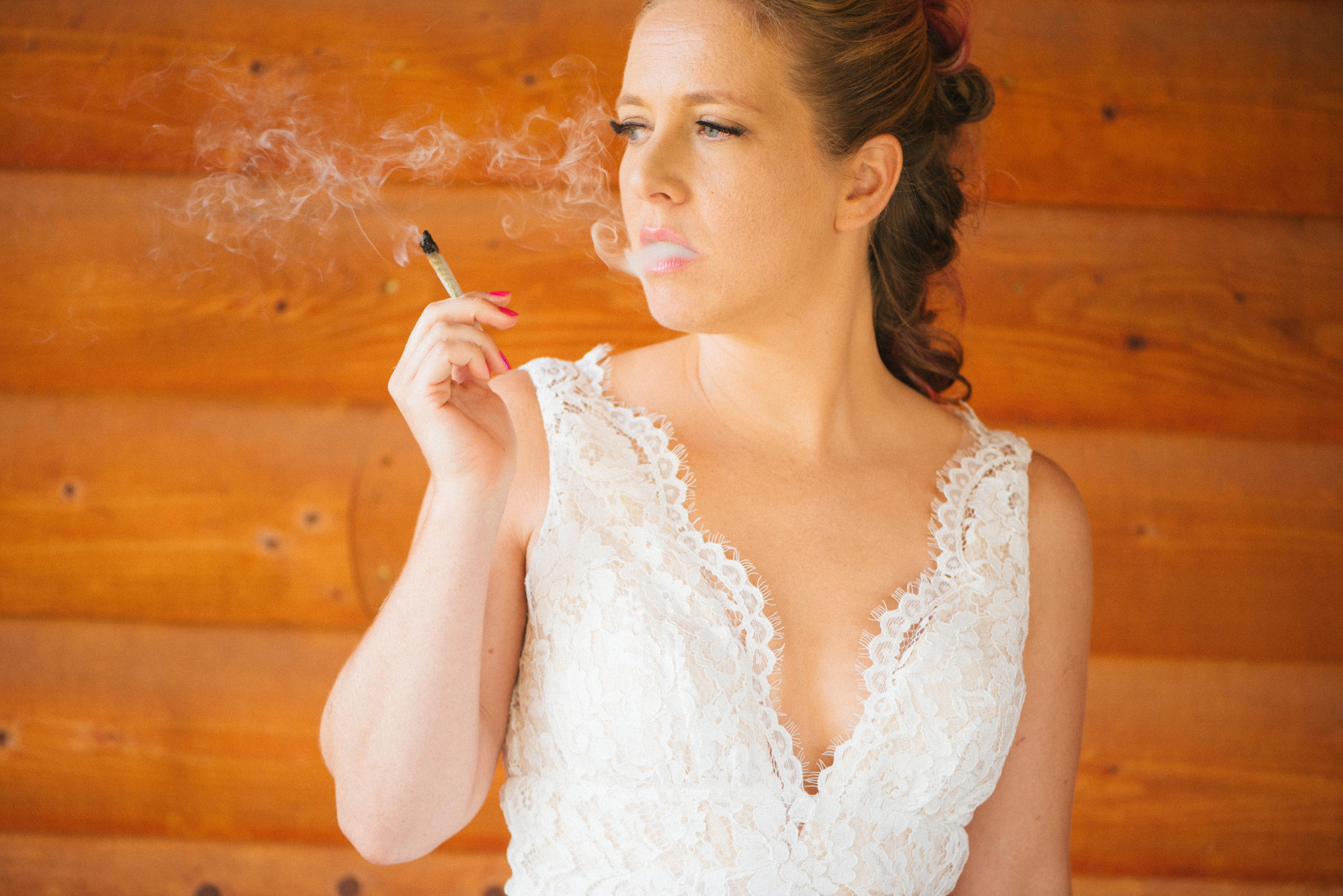 Lauren Gibbs posted her wedding photo, with cannabis, on Facebook as a conscious act of social progress.

How Are You Defining ‘Harm’

Overall, Facebook’s guidelines seem to focus on banning the promotion of violent crime and harm to individuals, animals, businesses, or specific groups of people. “People can draw attention to harmful activity that they may witness or experience as long as they do not advocate for or coordinate harm,” says the guidebook.

But don’t try to sell cannabis via Facebook. “We prohibit attempts by individuals, manufacturers, and retailers to purchase, sell, or trade non-medical drugs, pharmaceutical drugs, and marijuana,” the guidebook says.

That seems, well, kind of clear. At least in a legal “reasonable person” sense. In other words, a licensed cannabis retailer in a legal adult-use state should conceivably be able to maintain a Facebook account and post information about the store and its products—but it’s not going to be OK to actually place orders for cannabis via Facebook.

Menlo Park Not Making the Call

The problem that a lot of cannabis companies have run: The person (or algorithm) making a judgment call on one particular account or another often doesn’t seem to be a “reasonable person.”

'Facebook sells timeliness,' said social media expert Lauren Gibbs. When acceptance of an ad is delayed, it loses its value.

The company recently made a public commitment to hire thousands more content screeners in the wake of the Russian election-meddling scandal. But those screeners aren’t arriving with a well-developed knowledge of American cannabis law. Nor are they running their tough decisions up to Sheryl Sandberg or Mark Zuckerberg. The person making the decision to take down a state-legal, government-licensed cannabis company’s Facebook page may be a part-time worker in Poland. They’re making the decision based on what they know—and what they know may be as little as “marijuana is an illegal drug.”

That can often result in nonsensical decisions.

No Documentary for You

Gibbs is one of the co-producers of the documentary film Mary Janes: The Women of Weed. She and her business partners recently tried to promote the film’s screening at the Mill Valley Film Festival, in northern California, via Facebook. That advertising request was denied, because of the film’s subject matter.

This was, remember, a documentary film.

“We appealed the decision, but it took weeks,” Gibbs recalled. Ultimately, Facebook agreed to reverse its decision and run the ad—the day after the film’s screening.

“Facebook sells timeliness,” Gibbs said. “Marijuana companies have to go through these extra appeals that can delay the delivery of information,” to the point where, as in the case of the film screening, it becomes useless.

“I understand where they’re coming from as far as not wanting people to sell cannabis on Facebook,” said Mauria Betts of the cannabis branding agency Potency. “But it seems like they don’t want any cannabis content whatsoever,” Betts added, including instructional videos or content dealing with legal medical marijuana.

It’s been mentioned before, but it’s worth noting: Facebook is headquartered in Menlo Park, California—smack dab in the middle of America’s largest legal cannabis market.