Alan Brochstein, The Cannabis CapitalistJanuary 16, 2018
Share
Share on Twitter   Share on Facebook
Print
(smodj/iStock)
Cannabis stocks have performed exceptionally well over the past few months. While the overall market broke a streak of ten consecutive weekly gains last week, the Cannabis Stock Index still remains up year-to-date by 7% through January 12, and has advanced 168% since late October: 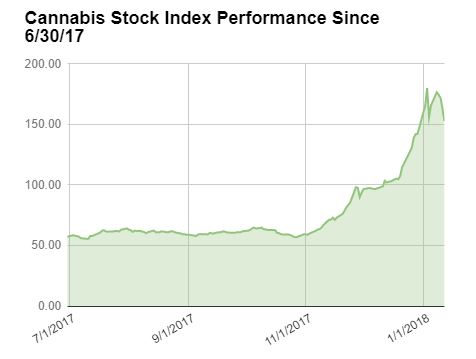 The legalization of adult-use cannabis in California on January 1st and anticipation of Canada’s legalization for adult use later this year fueled a speculative rally, which ran into a brick wall when Jeff Sessions rescinded the Cole Memo on January 4. That surprise move opened the cannabis industry to greater risk of federal enforcement of the Controlled Substances Act.

The end of the Cole memo halted the current rally, but a number of companies remain at prices that aren't justified by their fundamentals.

For those not familiar with the Cole Memo, issued in 2013, it was federal guidance that allowed states to move forward with legalization without fearing federal intervention. As long as the states followed eight rules, then Uncle Sam would essentially look the other way. Without those assurances and guidelines, local US attorneys have much more freedom prosecute if they see fit.

Despite the risk to the industry, many stocks have run up, even with the recent pullback, to levels that aren’t likely sustainable. Instead of high-fiving, holders of many of these stocks should be thinking about hitting the sell button in my view.

This is the third big rally since I began following this market sector in 2013. One thing I’ve learned is that new investors entering the market often gravitate to stocks with “cannabis” or “marijuana” in the name. They also tend to favor cute trading symbols. With this in mind, I would like to discuss three cannabis stocks that share these features and look quite risky to me.

Cannabis Strategic Ventures (OTC: NUGS) is a relative newcomer to the space, having recently changed its name from Cascade Energy in early December. The company doesn’t file with the SEC, but its disclosure at OTC Markets for the quarter ending 9/30/17 indicated 277 million shares outstanding, giving the company a market capitalization of $835 million as of January 12th. According to the disclosure, 42.9 million shares were sold at $0.0167 in the six months ending September 30th. The company had total assets of just $673,651 and lost $1.5 million on sales of $104,310 during the quarter. Over the past month, NUGS has increased 3710%. 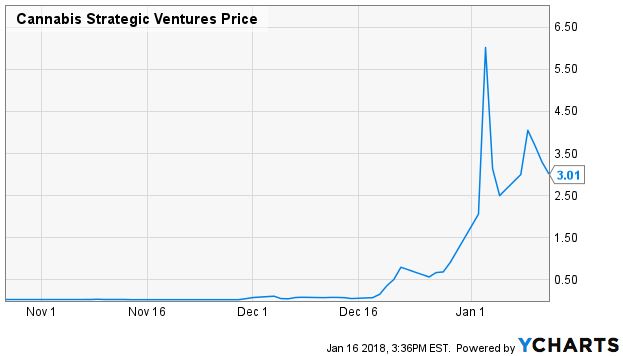 General Cannabis (OTC: CANN) is a Colorado-based provider of security services and consulting. According to its 10-Q for the quarter ending 9/30/17, the company generated sales of about $980K but produced an operating loss of $1.467 million. The company’s assets of $2.8 million were dwarfed by its debt before a recent capital raise of $4 million.

While CANN is a lot more legitimate than my other two examples, investors should understand this recent capital raise by the company, which now has 36.5 million fully-diluted shares (including warrants and options) that give it a market cap of $252 million as of January 12th. While the stock trades at $6.90, the company sold shares as recently as December at $1.00 along with warrants to buy additional shares at $0.50. In addition to the 4 million warrants at $0.50, the company had 5.6 million warrants at an average of $0.69 outstanding as of September 30. The holders of these warrants stand to reap over $60 million in profits at the current price, and this could pressure the stock. Over the past month, CANN has increased 97%. 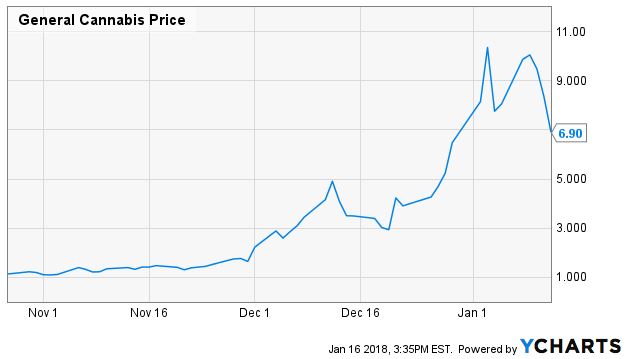 Marijuana Company of America (OTC: MCOA) has been operating in the cannabis space since late 2015 but only recently began filing with the SEC. Its 10-Q for the quarter ending 9/30/17 showed sales of just $2,927 for the quarter and an operating loss of almost $700,000. It ended the quarter with total assets of just $487,336 but liabilities of $3.4 million. With 2.066 billion shares, the market cap as of January 12th was $99 million. The company has seen significant selling by its insiders on almost a daily basis, a good indication of what they think about the company’s prospects. Over the past month, MCOA has increased 43%. 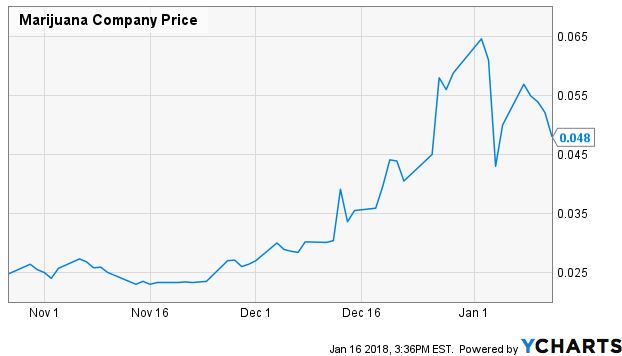 Look to the Fundamentals

I am hopeful that the new policy of Jeff Sessions is checked by Congress, but, even if so, the three companies I have highlighted appear to be at unsustainable prices. For those holding these or other stocks that don’t appear to have fundamentals to support their valuations, this is not a time, in my view, to be aggressively buying.

Bottom line: Investors are still piling into cannabis stocks, particularly ones with cute names or trading symbols, despite the change in risk to the sector. Many of these stocks look quite risky at the moment given the big run-up in prices and the lack of solid fundamentals.

Next up: The Canadian cannabis producers have captured investor interest ahead of legalization. I will help break down the 27 publicly-traded companies that are licensed by Health Canada.

All About the Industry