Natan PoniemanJanuary 28, 2019
Share
Twitter   Facebook
Print
Some religious leaders condemn all aspects of the "demon weed," but the evidence from each tradition is various and complex. (CSA Images/iStock)

Is consuming cannabis a sin, haram, not kosher?

For many, it’s a serious question. In the Judaic tradition, scholars still debate the question of whether God meant Moses to use cannabis as part of an anointing oil when he spoke of a plant called kaneh-bosem, in Exodus 30:22-30.

The Bible says the body is a temple, and that God created herbs to serve humanity. Is that a conflict?

In the more conservative Christian traditions, cannabis has often been denounced as a sinful indulgence or a tool of the devil. The notorious propoganda film Reefer Madness was originally produced by a Christian church group.

But what does each religious tradition actually say about the plant and its consumption? Entire books could be written about the issue, and we at Leafly are not religious scholars. But we do know enough to get the discussion started.

Here’s an introduction to the treatment of cannabis by some of the world’s major religions.

One of the widely accepted tenets of Christian faith is the idea that the body is a temple of the Holy Spirit (Corinthians 6:19–20). Drugs used with the purpose of healing the body and relieving pain may be seen as a natural part of the Christian way of life.

Luke, an apostle of Jesus who wrote one of the Gospels, was a physician who prescribed medication (Colossians 4:14). It’s stated in Psalm 104:14 that God created herbs for the service of humanity.

Moderation seems to be the key to the enjoyment of non-medical cannabis in the Christian tradition.

Using these Biblical verses as a guide, the medicinal use of non-psychoactive cannabinoids (like CBD) can be seen as more than accepted under the Christian tradition.

What about recreational use? Here it’s helpful to look at one of Christianity’s favorite psychoactive drugs: alcohol.

Alcohol is such an integral part of the Christian liturgy that Jesus’s first recorded miracle was turning water into wine (John 2:1-11). To this day, wine remains one of the most sacred substances of the Christian rite, and while its abuse—getting really drunk—is clearly frowned upon (Ephesians 5:18), its psychoactive and recreational effect is celebrated, as in this phrase from Psalm 104:14–15, which holds that that God has gifted “wine to gladden the heart of man.”

Moderation seems to be the key to the enjoyment of non-medical cannabis in the Christian tradition. The Bible encourages us to remain alert and clear-headed (1 Peter 5:8) in order to serve our neighbor and spread God’s love. So, while Christianity might likely frown upon getting full-on baked, there’s nothing in the Bible that condemns the use of cannabis to help us get in a better mood while staying in focus, or stay productive throughout the day.

Buddhist doctrine is not as strict as that of the Abrahamic religions, since its spiritual tradition does not include a path to salvation through faith, nor any type of “higher authority.” The religion itself is more focused on the follower’s own spiritual development.

Some Buddhist traditions have praised THC’s relaxing effect as a helpful tool for meditation.

In that sense, there’s nothing preventing Buddhists from using cannabis responsibly, since Buddha’s teachings are not meant as strict rules, but as guidelines towards achieving Nirvana.

However, Buddha did lay down the Sīla, a code of conduct comprised of Ten Precepts for “right speech, right action, and right livelihood.” The fifth of these precepts calls Buddhists to abstain from taking intoxicating substances that can cloud the mind, because a clear mind is needed for seeing the “true nature of all things,” and intoxicants can lead to carelessness which can cause the user to overlook the other precepts

Since medical forms of cannabis that include only CBD or other non-psychoactive cannabinoids (like CBG) are not intoxicants, there’s nothing in Buddhist scripture recommending against their intake.

Some Buddhist traditions, especially the ones rising in the West, have praised THC’s relaxing effect as a helpful tool for meditation. No Buddhist authority is bound to censure a follower for consuming THC, cannabis’s psychoactive and intoxicating cannabinoid. However, it’s up to each practitioner to judge whether getting high is helping their practice, or whether it’s preventing them from attaining true focus.

There is no explicit prohibition of cannabis in the Quran, nor in the Sunnah. However, many scholars might argue that just because the scriptures are silent on the subject, it doesn’t mean the plant is halal (allowed).

The main issue with cannabis and Islam lies in the plant’s intoxicating effect.

Let’s first have a look at non-psychoactive components in medical cannabis, like CBD. When taken alone or without any THC, CBD’s therapeutic effect might be considered halal, in the same way that Islam allows a wide number of medications within a medical context.

The main issue with cannabis and Islam lies in the plant’s intoxicating effect. Most arguments that support Islam’s prohibition of cannabis are based on verse 219 of the second Surah, and verses 90/91 of the fifth Surah. Those hold that wine should be forbidden because it’s considered a tool of Satan. Islamic jurists have interpreted these verses to mean that, by extension, every intoxicant should fall under the same category.

But is THC truly an intoxicant in the same sense as alcohol? In the Sunnah, Muhammad forbids wine because its abuse can “impair the intellect.” THC’s effect can vary largely from user to user, and from strain to strain. So it’s within each believer to honestly consider whether cannabis consumption is affecting their judgement, in which case it would be haram (forbidden), or if it’s having a positive effect on the way they perceive reality, in which case, it would be halal.

The relation between cannabis and the Jewish people dates back thousands of years. Some scholars hold that God meant Moses to use cannabis as part of a recipe for anointing oil when He spoke of a plant called kaneh-bosem, in Exodus 30:22-30.

Kosher certifications for cannabis medication have already been granted by rabbis both in the US and Canada.

The Talmud includes an explanation of how to grow cannabis. The most important Torah scholar of the middle ages, Maimonides, described how to use it to help with respiratory ailments. Cairo’s 16th century spiritual leader, Rabbi ben Solomon ibn Abi Zimra, talked positively of the plant’s uplifting effects.

Kosher certifications for cannabis medication have already been granted by rabbis both in the US and Canada, which clears the way for medical cannabis consumption in Judaism.

Traditional intolerance of non-medical cannabis use by Jewish authorities has been based on the premise that the plant affects the user’s judgment and ability to focus. They have maintained that Jews are expected to cultivate a balanced mind in order to positively help their communities and to focus on the study of Torah.

But since there’s nothing inherently wrong with the cannabis plant within Jewish Law (as stated by God in Genesis 1:29: “I have given you every herb yielding seed, which is upon the face of all the earth…”), using cannabis for therapeutic reasons, like reducing stress or helping concentration could be considered perfectly acceptable within the Jewish tradition, as has been stated by a number of contemporary rabbis. 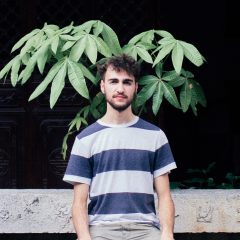 Natan Ponieman is a cannabis writer with a special interest in marketing, sociology, religion and art. He started writing about cannabis after working for a decade as a copy and scriptwriter for advertising and TV.