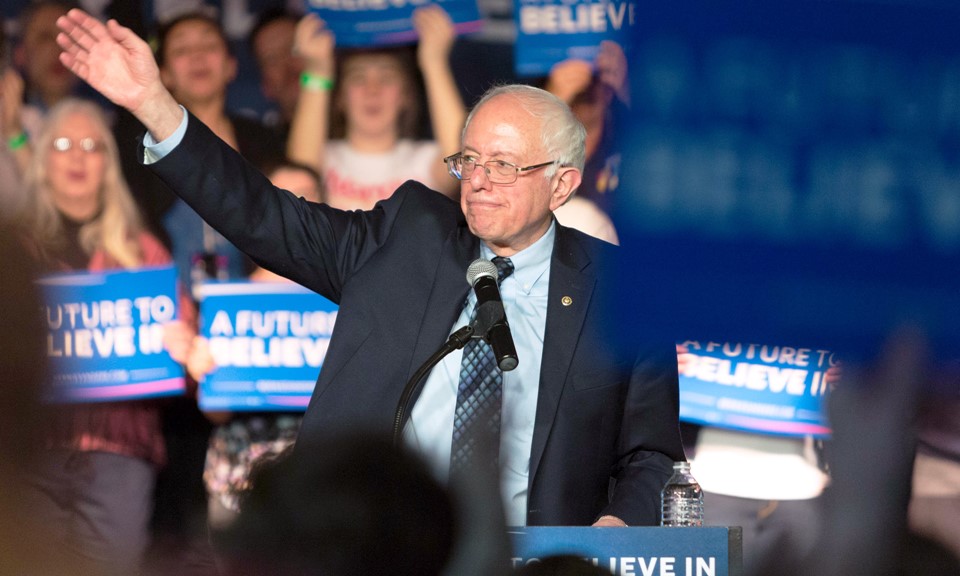 Last year the cannabis industry donated $18,500 to presidential candidates. Only $1,000 of that went to Sen. Bernie Sanders.

If the evidence stacks Bernie up as the only pro-cannabis candidate — and it does — why hasn’t the industry done more to support him?

That’s a bit of a misleading question. It’s true the National Cannabis Industry Association and Marijuana Policy Project donated more to Rand Paul than Sanders, but cannabis PACs historically don’t donate to presidential campaigns. This is partly because they don’t expect cannabis reform to come from the executive branch, and partly because they don’t have the cash to spare.

Donation records show that a number of budtenders have made individual contributions to his campaign, but it’s hard to account for the myriad of industry jobs that aren’t as obviously cannabis-related: jobs like policy analyst, lawyer, researcher, writer, sales representative, and my own title, photo editor.

This still doesn’t address my titular point, though. Why should cannabis advocates support Sanders?

For one, he’s the only candidate who will push to federally legalize cannabis.

All three remaining Republican candidates are on-record as supporting states’ rights to choose, but none of them advocates federal rescheduling. Sen. Ted Cruz and Ohio Gov. John Kasich openly condemn adult consumption. Donald Trump has changed his position so many times, it’s hard to know where he stands on this (or any other) issue.

Hillary Clinton wants “more research.” She supports moving cannabis from Schedule I to Schedule II. That would open up opportunities for meaningful medical studies within the U.S. and would ensure certain patients access, but that access would be “severely restricted.” Clinton, in other words, would be a mild step in the right direction.

Her position on cannabis has marginally improved during the latest election cycle, but it hasn’t always been so sympathetic. Moreover, that recent improvement can be attributed almost entirely to Sanders’ success.

Clinton has demonstrated essentially zero commitment to cannabis reform. In the 1990s she was a vocal proponent for President Bill Clinton’s crime bill, the one that massively expanded America’s drug incarceration rate.

In a 2011 interview with Televisa, she said she wouldn’t consider legalization because “there is just too much money in it.” She further argued there was “no alternative” to continuing the bloody fight between Mexican law enforcement and the cartels. Apparently she wasn’t aware that criminalization is not only one of the least effective methods of countering drug addiction, according to the RAND Corporation, it’s also the second most expensive.

Hillary is nothing if not adaptable, though. She’s recently changed her tune to favor a (somewhat) treatment-based approach to criminalized drugs, but she still won’t consider removing cannabis from federal scheduling entirely, which would put the plant on par with alcohol and tobacco. Her call for “more research” — which ignores the literally hundreds of studies that show both cannabis’s medical promise and its limited risks — could be heartfelt concern over the well-being of Americans. Or it could be an example of money talking.

According to Open Secrets, Hillary Clinton has accepted over $2 million in donations from the pharmaceutical industry so far in the 2016 election cycle. Between her Senate bids in 2000 and 2006 and her 2008 presidential campaign, she accepted nearly $1 million from drugmakers. Donors to her 2008 campaign included Pfizer, Johnson & Johnson, and Bristol-Myers Squibb, among others. These companies boast a wide portfolio of prescription drugs, including many that treat the symptoms of Alzheimer’s, arthritis, anxiety, inflammation, hypertension, asthma, glaucoma, generalized pain, and more — conditions and symptoms that also have seen varying degrees of success when treated with cannabis.

If pharmaceutical companies are among Clinton’s enemies, as she has claimed during this election’s democratic debates, why does she keep accepting their donations?

Bernie Sanders, by comparison, is a longtime champion of the cannabis cause.

Sanders’ resolve has only strengthened since announcing his presidential bid. In October 2015, he publicly announced his intention to completely remove cannabis from the DEA’s schedule of controlled substances. He even introduced a Senate bill to that effect, the Ending Federal Marijuana Prohibition Act of 2015.

He won’t stop at cannabis legalization. Sanders is committed to re-enfranchising those who lost their right to vote after serving felony drug time, banning for-profit prisons, eliminating mandatory minimum sentences for non-violent drug offenses, giving cannabis businesses and industry professionals equal access to banking, and stopping local governments from using criminalization as a source of revenue.

Hillary Clinton is touting a good number of these policies too — or at least she started to once Sanders began gaining supporters by openly embracing them.

Is Sanders Electable? You Might Be Surprised by the Answer

A lot of media coverage has suggested that Clinton appeals to more people than Sanders. The evidence doesn’t support that claim. The most recent aggregation of public polling shows favorable Clinton ratings at 40.7 percent and unfavorable ratings at 54.7 percent. Sanders’ ratings are, by contrast, 49.5 percent favorable and 41 percent unfavorable. Clinton’s public approval ratings have been slowly declining since 2011, and rapidly declining since late 2012. By April 2015, more people felt unfavorably about her than favorably. By contrast, Sanders’ approval ratings have been consistently increasing since March 2015. 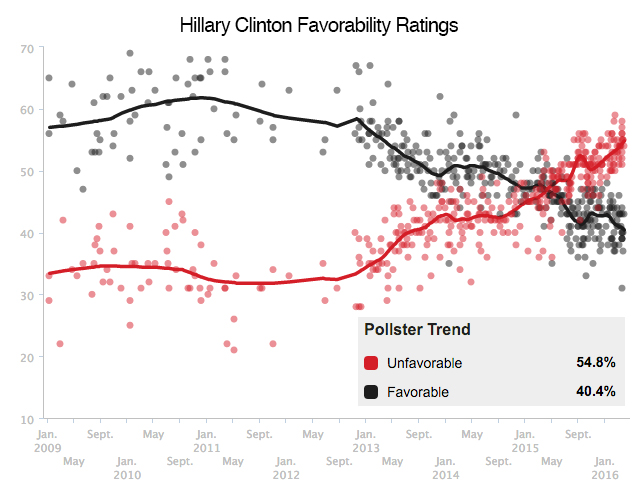 Critics often claim Sanders isn’t electable in November’s general election, but the numbers say otherwise. Recent polling not only suggests he’s electable, it also shows he’s actually more likely to win against Trump or Cruz than Hillary Clinton would be.

When discussing electability, it’s also important to consider how states vote in the general. The majority of Hillary’s delegate leads come from red states, states that historically vote Republican in presidential elections. Right now, Hillary has only won four blue states, one of which was nearly a tie (Iowa: 23 to 21). Bernie has won six. She has won more swing states than Bernie (four to his one) but there’s no guaranteeing how those states will vote in the general election.

This means Hillary’s strongest support is coming from states that usually vote Republican anyway. Sanders has outright won more states that tend to vote Democrat, and the blue states he’s lost have been by mostly insignificant margins. Clinton’s lead isn’t as big as it might seem.

What About Delegate Math? Is It True That Sanders Can’t Mathematically Catch Up to Clinton?

No. She has a lead, particularly among superdelegates, but that lead isn’t “all but insurmountable.”

While a majority of superdelegates have expressed support for Hillary, their backing isn’t guaranteed. If Sanders continues to win states outright while also winning relatively equal numbers of delegates in the states he loses, superdelegate support could very well shift to Sanders by the time the Democratic convention convenes in July.

As Nate Silver pointed out at FiveThirtyEight, “Superdelegates are mathematically relevant when a candidate has 41.2 percent to 58.8 percent of elected delegates.” Both candidates are currently in the range where superdelegate votes matter, and Hillary’s lead isn’t strong enough to knock Bernie out of the running.

So which candidate should cannabis advocates back this election?

When choosing whom to lend their vote (and financial support) to, I ask all cannabis advocates to ask themselves: Do you want a candidate with a 20-plus year track record of fighting for federal cannabis legalization, sensible drug policy, and criminal justice reform? Or do you want a candidate who openly opposed cannabis reform until it became politically untenable (and even then only avowed tepid leadership), who supported policies that further institutionalized mass incarceration for cannabis consumers, and whose campaign is, at least partially, funded by the pharmaceutical industry?

To me, the answer is clear.

What Do the 2016 Presidential Candidates Think About Cannabis?