David Bienenstock was writing about cannabis when cannabis writing wasn’t cool. Or at least when it wasn’t so legal.

For the past few weeks he’s been touring the country to promote his new book, How To Smoke Pot (Properly): A Highbrow Guide to Getting High, published by Penguin/Random House. Part how-to book, part political manifesto, and part memoir, How To Smoke opens a friendly door to the world of cannabis for readers new to the subject, and will inspire a hearty hell yeah from those who possess more experience. 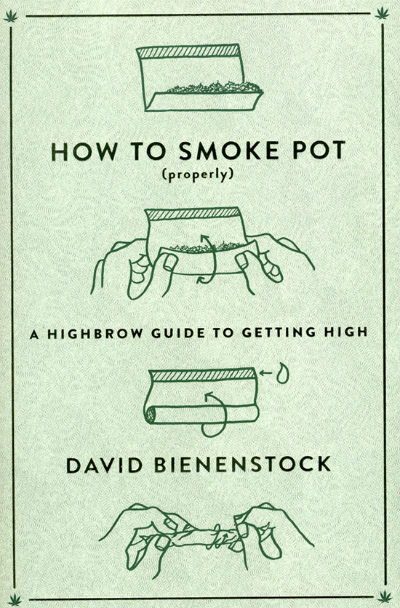 I sat down with Bienenstock this week, a few hours before his reading at Third Place Books near Seattle, to ask how the book’s been received.

The most interesting thing he’s learned, he said, is how large the gap is between states that have a long history of legalization—California, Colorado, Washington, Oregon—and those that don’t, like New York.

“I’ve done book events in New York and D.C.,” he said, “and there’s a line in the book that I usually read. It’s a simple statement: ‘We’ve come to the beginning of the end of marijuana prohibition.’ And on the East Coast, that line gets a standing ovation. I mean cheering and stomping feet.”

“Whereas people here on the West Coast are like, 'Yeah, man,'” he said, smiling broadly and slowly nodding his head like no big thing.

“I use that as an opportunity to remind people out here in legal states: It’s great that we’re used to this idea, but not everybody has the same freedoms,” Bienenstock added. “It’s incumbent on people who have that freedom to work even harder. Because it’s not as risky for them to come out, be honest, and be an advocate.”

The classic social justice line about “nobody’s free until everyone is free” definitely applies, he said.

Anyone who’s ever been to a cannabis book event can testify to the entertaining nature of the questions. So I asked Bienenstock: What’s the strangest question you’ve gotten?

He laughed. “They’re too weird to acknowledge with anything other than a nod of the head and a ‘Thank you for your question.’ “

“But that would be true for any book reading,” he added. “I’ve checked with the people who run the events. Those questions are not unique to cannabis books.”

The most common question? That’s easy.

The biggest piece of advice he gives to readers is to take notes. Write down your experience.

“When you find something you like, or something you don’t particularly connect with, write that information down. Bring those notes to you with your retailer, or wherever you’re sourcing, and ask for the same stuff. Individualize the experience.”

Bienenstock has been writing about cannabis since the 1990s. His interest, he says, grew out of a personal awakening to both cannabis, the nonsense of prohibition, and the importance of fighting for social justice.

“Early on, my personal experience with pot didn’t match up to what I was being told,” he said. “And because of that, it became one of the first things I endeavored to research. I had such a positive experience with it, so I started to look into the details. Whatever information I could find. And by doing that I discovered that the claims against it just didn’t hold water.”

With a majority of Americans now favoring legalization, and more states setting up legal regulated cannabis markets, a once-united movement finds itself increasingly fractured. Some medical marijuana advocates resist recreational legalization. Old-school cannabis crusaders want to set the plant free for home growers, but balk at the commercialization of the product.

Bienenstock sees it as a natural outgrowth of success. “When we were all getting our asses kicked, everybody was on the same page,” he said. Now there’s room for disagreement. “We should be able to disagree without being disagreeable, though,” he added. He expects the upcoming campaign for California legalization to be tumultuous. “We’re going to see friction, just as we did with Prop 19,” the state's failed 2010 legalization measure. “One thing I would ask is that we don’t gloss or dismiss the legitimate concerns that people are going to have.”

One of those concerns is about corporate America taking over an industry built by small entrepreneurs who risked their lives and liberty.

The legalized industry isn’t perfect, he said. But it’s emerging within the existing imperfections of American capitalism.

“We have to fight really hard to make this an inclusive industry,” said Bienenstock. “In the book I say that cannabis should transform capitalism, not the other way around.”

“Because this industry is just getting established, legally, and because there are progressive people involved, we have the opportunity to create a new industry that actually does work for workers, that nurtures small businesses, that uplifts these communities that have been disproportionately affected by the war on drugs. But it’s going to be hard. Because the rules of capitalism still apply.”

“Capitalism has problems. It’s harder for people without capital to get into this industry, just as in other industries. It shouldn’t be.” And that’s the challenge, Bienenstock said. “Let’s use this industry as a model to change things we don’t like about capitalism.”

It starts with a basic ethic of sharing, he said. Capitalism is about competition, but cannabis culture is about collaboration. “This culture is about sharing and inclusion,” he said. “It’s about bringing people in, allowing them to be part of the shared experience. At its heart, pot culture is about this one simple gesture: This is what I have,” he said, mimicking the offer of a shared joint. “It’s not much, but I’ll share it with you.”