Dave Schmader November 14, 2017
Share
Share on Twitter   Share on Facebook
Print
Dec. 11-13, 2019, brings the annual Marijuana Business Conference to Las Vegas. The huge cannabis industry convention is expected to draw tens of thousands guests from all over the world. In advance of MJBizCon—and in celebration of Nevada’s freshly legal recreational cannabis market—Leafly presents Dave Schmader’s classic four-part series for cannabis fans ready to make the most of their time in town. Note: We have updated links to stores where possible, but some of the shows referenced in Schmader’s original piece may no longer be running.

The Entertainment Capitol of the World Just Got More Entertaining

That this particular destination should now be home to legal recreational cannabis feels cosmically apt. With its density of sensory pleasures—from dazzling theatrics to ostentatious buffets to the great parade of gawk-worthy humanity that is the Strip—Vegas seems the perfect playground for the cannabis-enhanced. So I got myself to Vegas, got high on legal cannabis, and ventured out to a handful of Vegas shows, starting with…

Jennifer Lopez: All I Have 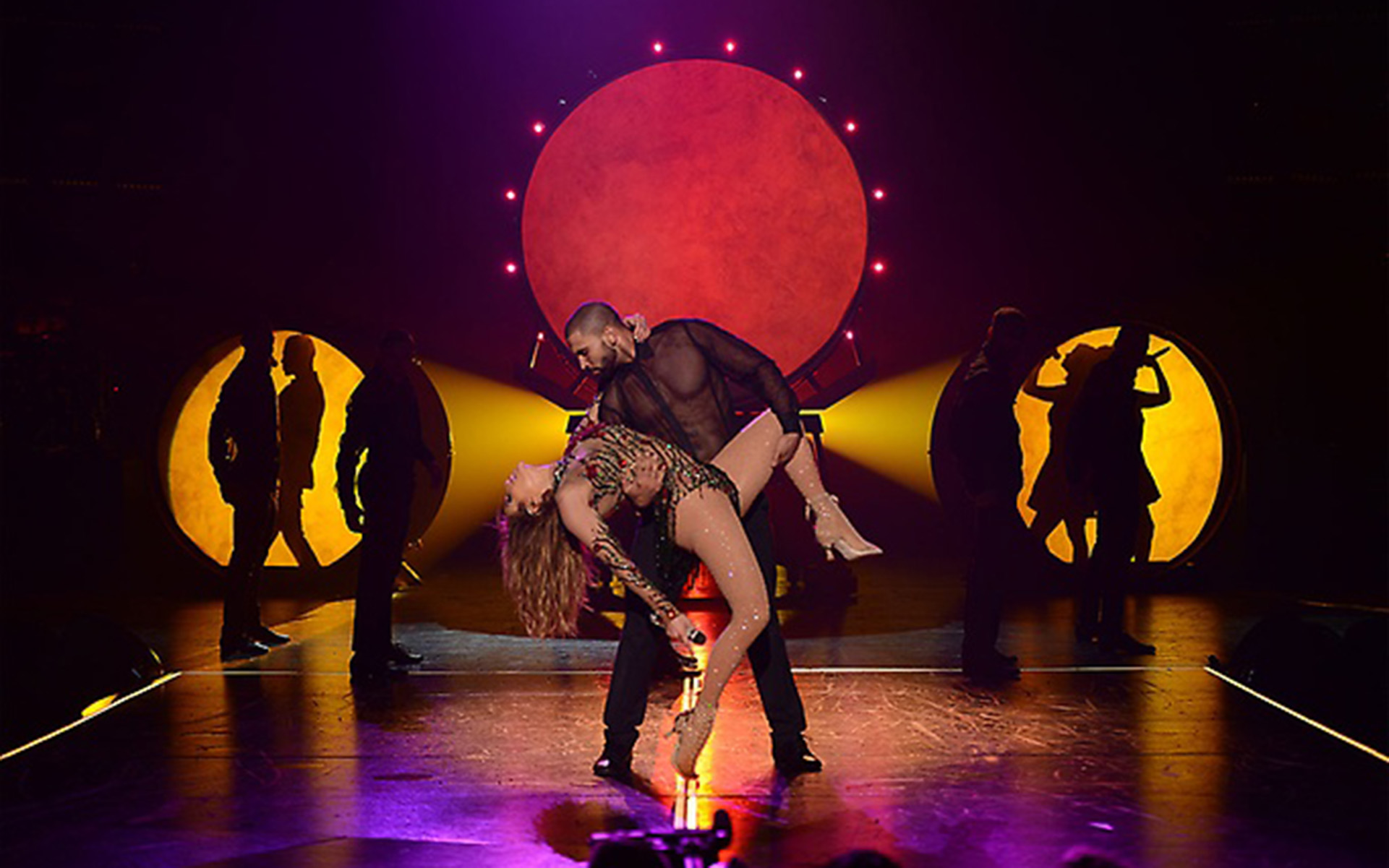 She’s giving you everything, every night, people. (Courtesy of Vegas.com)

Staged in the 7,000-seat AXIS auditorium at the Planet Hollywood Resort & Casino, Jennifer Lopez’s All I Have is the multimedia superstar’s first Las Vegas residency, and the mere fact of its existence is a testament to the rightness of her superstardom. (Complacent superstars do ad campaigns that require lounging in couture for a weekend. Ambitious superstars do Vegas residencies that require delivering the goods live onstage several times a week for months.)

J-Lo wields her stardom with the joy of a hungry newcomer.

It is my delight to report that J-Lo delivers, wielding her stardom with the joy of a hungry newcomer. Her pleasure in the sheer doing of it is contagious. A high-tech, career-spanning tour of all things J-Lo, All I Have features 23 songs, two languages, a parade of backup dancers in ever-morphing costumes, and multiple blockbuster set changes—at one point a Brooklyn subway car storms the stage, with J-Lo splayed across the bow like a glamorous Tom Hardy in Mad Max: Fury Road.

One great advantage that residencies have over tours is technical stability. Free of nightly builds and strikes, residencies can get ambitious with set and tech design in ways too intricate for touring shows. At virtually every moment of All I Have, the show offered something delightful. Perhaps the most dazzling moment came when Lopez passed singing duties to a backup dancer, stripped down to lingerie, and writhed purposefully for several minutes on a chaise lounge. (Do you know why 48-year-old zillionaires writhe semi-naked onstage? BECAUSE THEY WANT TO.)

Lopez danced (awesomely; remember In Living Color?), sang with help from backing tracks that enabled the awesome dancing, and made all seven thousand of us feel like we were at a relatively intimate club show. My only disappointment was my own issue: During J-Lo’s time onstage, Puerto Rico was suffering through a period of deadly neglect from the U.S. government, and I longed for this daughter of Puerto Rican immigrants to rip the government a new one. But she’s such a pro the most she said about current events was, “We need more love in this world!”

Does All I Have hold any special delights for high people? Not explicitly—but God knows my ability to smile and sway through a couple dozen similar-sounding J-Lo hits was greatly enhanced by cannabis. 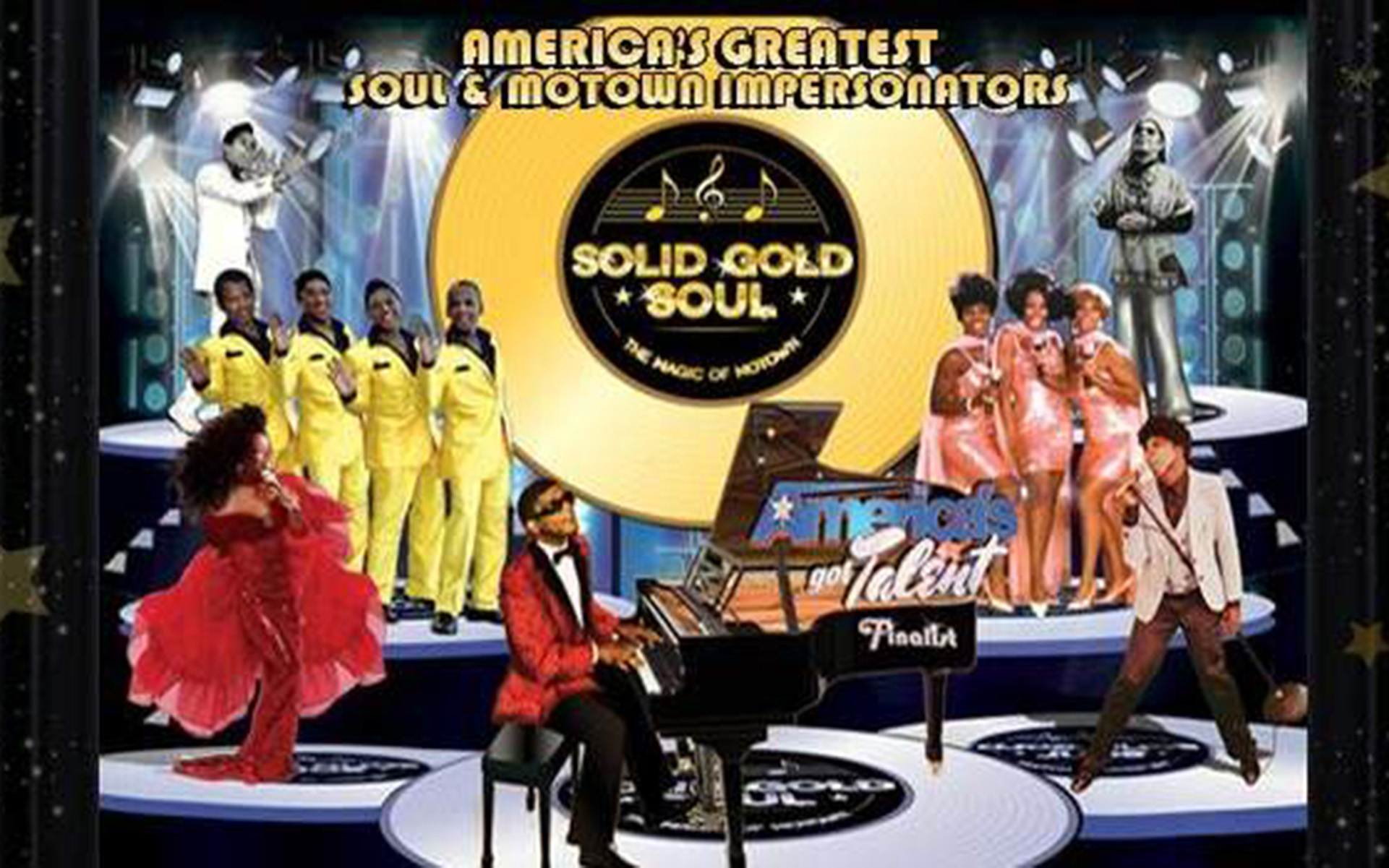 I cannot tell a lie: I bought tickets to this show because RuPaul told me to. Not directly—it was on his podcast, where he raved about the low-tech, low-glitz, raucously winning pleasures of this decade-spanning soul revue starring “America’s Greatest Soul and Motown Impersonators.”

Solid Gold Soul is a low-tech show loaded with moments that are truly thrilling.

And so I joined the small but enthusiastic crowd in Bally’s Las Vegas’s  Windows Showroom—a low-ceilinged conference room with a stage along one wall and stackable banquet chairs extending out before it. On the stage: a generation-spanning, four-person band, composed of pros who’ve toured the world with music’s biggest names, and here tonight to lend their skills to a parade of alternately transcendent, delightful, heartwarming, and hilariously ramshackle approximation of ‘60s soul superstars.

On the marquee: James Brown, Stevie Wonder, Diana Ross & the Supremes, Martha Reeves & the Vandellas, Sam Cooke, and more. Among the cast: Pete Peterkin, an America’s Got Talent alum with a knack for channeling Ray Charles, and Grady Harrell, an actor who played brother Jackie in the TV movie The Jacksons: An American Dream and dazzles here as an effortlessly dexterous and appropriately gorgeous Jackie Wilson.

RuPaul wasn’t lying: By Vegas standards, Solid Gold Soul is a low-tech, almost rough-hewn show. But it’s also got moments that are truly thrilling, where the goofy hindrances bounce off the amazing talent to create the most impressive spectacles.

Is it good for high folks? Ask the 14 minutes I lost to mulling the deeper meaning of being driven to cry real tears by a man performing Four Tops covers in a polyester wig. 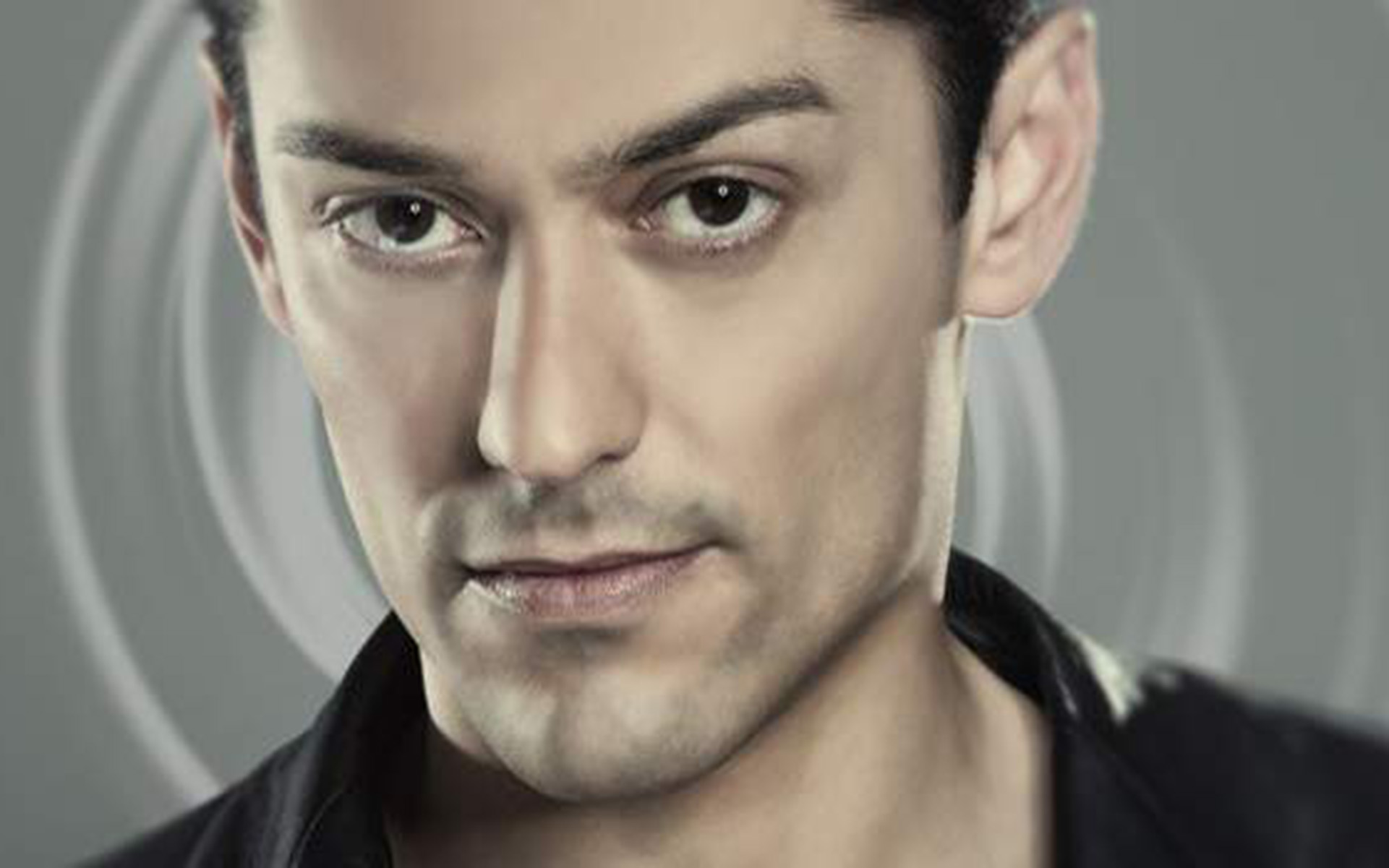 Frederic Da Silva: Do not be skeptical of his ear piece. (Courtesy of Bally’s)

In the interest of a well-rounded sample group, I deliberately steered myself toward a show outside my natural circle of interest: Paranormal: The Mind-Reading Magic Show, performed by the family-friendly mentalist Frederic Da Silva, who took the stage of Bally’s Windows Showroom in shimmery black menswear and headset mic to spin the mind-reading magic he’s perfected over the past 25 years.

'Paranormal' is a testament to the power of professional showmanship.

For those open to paranormal fascination, Da Silva’s show will be a goose-pimply thrill ride. Da Silva’s not just a mind-reader and card-predictor, he’s also a feeling-transmuter, bringing a pair of audience members onstage to tickle one with a feather and causing the other to feel it.

Conversely, for non-believer me, Paranormal is a testament to the power of professional showmanship, and watching Da Silva expertly manipulate the attention of the room through rhythmic speech, light mime, careful set-ups (“Here is the young man who was earlier skeptical of my ear piece!”), and a Moby-ish background soundscape was its own thrill.

I’d also eaten part of a highly-dosed cannabis candy bar, purchased off the medical menu at Reef Dispensary, and strong enough to slowly but steadily transform me over the course of the show into a very high human. This resulted in me being ferociously engaged with everything happening onstage, while living in perpetual fear of being tapped for audience participation.

I made it out unscathed, but it seems worth a warning: If you are someone for whom cannabis creates a vortex of insularity, avoid shows where your high ass might get dragged onstage in front of magic-loving families. 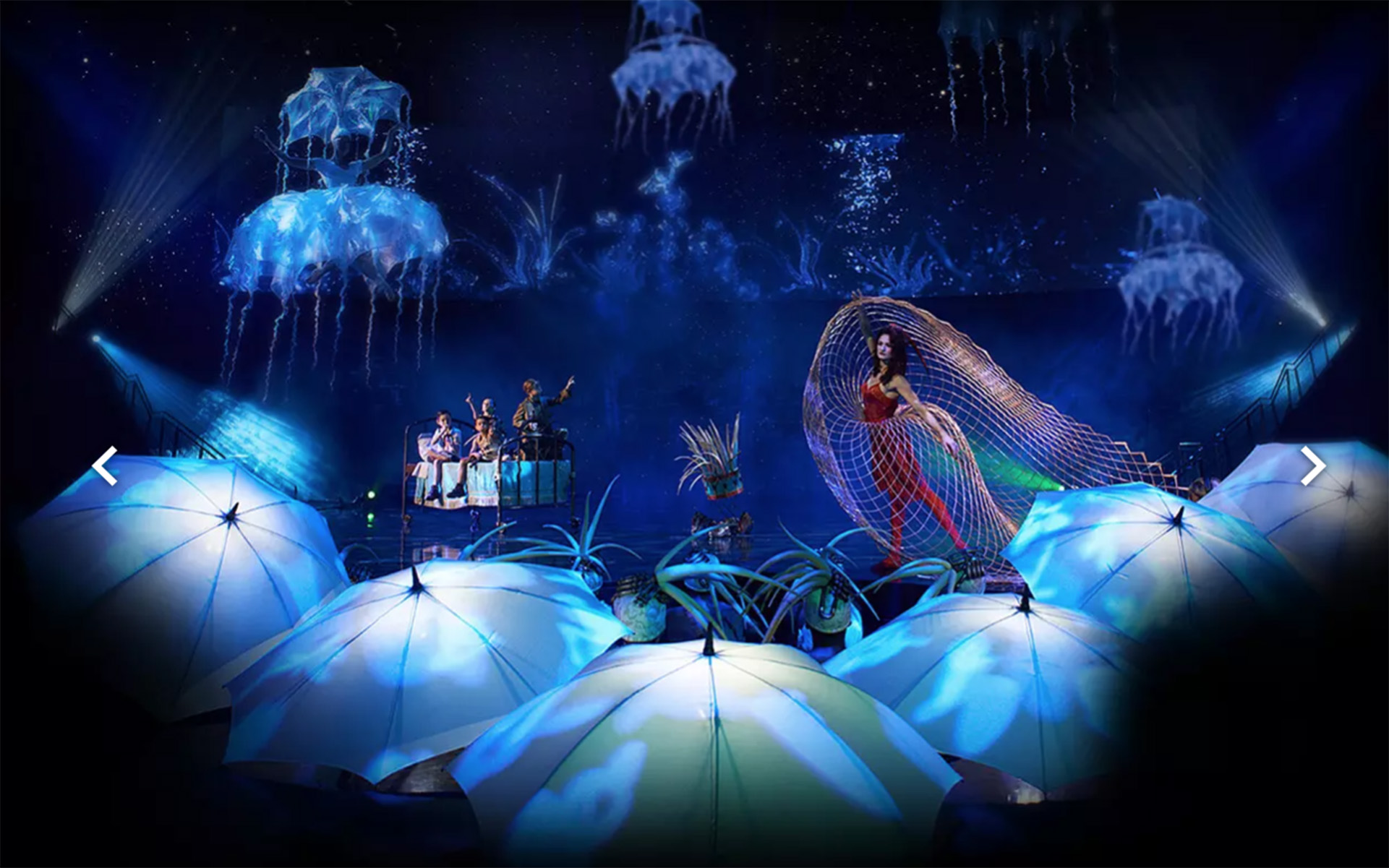 Beatles LOVE: one of the greatest experiences a human high can have.(Courtesy of Cirque du Soleil)

Beatles LOVE is the Cirque du Soleil production set to an all-Beatles soundtrack, staged in a custom-built showroom at the Mirage and described as “a rock ‘n’ roll poem brought to life by a cast of world-class aerialists, acrobats and dancers.”

'LOVE' is a nonstop pleasure machine, perfectly aligned with the sensory enhancement that comes with cannabis.

It is also one of the greatest experiences a high human can have. From the dazzling physical rigor of the circus artists to the inexhaustible pleasures of the Lennon/McCartney songbook, LOVE is a nonstop pleasure machine, and perfectly aligned with the sensory enhancement that comes with cannabis.

Among the visual amazements: trombone stilts, tricycles pedaled by empty boots, a tap-dancing Jimi Hendrix, little kids in white masks and hard plastic Beatles wigs, a full-sized VW bug that breaks into pieces and is spun around on sticks, and two and half minutes of extreme rollerblading set to “Help!”

As for the show’s cannabis-friendliness: During the preshow, a vagabond clown blows smoke from (scentless) incense at audience members, ensuring them, “It’s medication!” GO HIGH OR NOT AT ALL.

1. Aim for “Visual Spectaculars!” From high-tech diva shows to the Blue Man Group to the cornucopia of Cirque du Soleil productions, Vegas is rich in shows featuring world-class professionals working very hard to amaze you, and it is their job to succeed.

2. That said, don’t be afraid to check out a lower-marquee show. Not everyone can swing the cost of Vegas’ big-ticket shows, and there’s plenty of joy to be found in Vegas acts that don’t break the bank. See Solid Gold Soul and Paranormal above, or the many mid-price magic, comedy, and music shows that abound around Vegas.

3. Give yourself plenty of time to get where you need to go. As in quicksand and Congress, nothing travels fast in Vegas, especially humans, who are steered through complicated rotundas, block-spanning skybridges, and seemingly never-ending rush-hour traffic. What’s more, it’s all fascinating to look at, especially if you’re high, so consider showing up early enough to behold the attendant wonders of the show-hosting casinos.

4. Show up on time. The show time on the ticket is the literal start time of the show. Of the four shows I attended, only J-Lo started later than the announced time AND SHE’S J-LO.

5. Prepare to deal with drunks. Las Vegas is a liquor city, with free drinks in casinos, open drinking in the streets, and a fair amount of boozy aggression in the air. While waiting in line for shows, I witnessed three drunken flare-ups, of the “You gonna say sorry for bumping into me???” variety. Prepare your high self by practicing inner tranquility and a few drunk-calming phrases, such as “I’m so sorry! And may I say you look wonderful tonight?”