Dave Schmader November 15, 2017
Share
Share on Twitter   Share on Facebook
Print
Dec. 11-13, 2019, brings the annual Marijuana Business Conference to Las Vegas. The huge cannabis industry convention is expected to draw tens of thousands of guests from all over the world. In advance of MJBizCon—and in celebration of Nevada’s freshly legal recreational cannabis market—Leafly presents Dave Schmader’s classic four-part series for cannabis fans ready to make the most of their time in town.

Las Vegas Is the Entertainment Capitol of the World. This Includes Your Mouth

From sensuous dining experiences to hardcore munchie indulgences, Las Vegas is loaded with seriously pleasurable experiences for people who eat. This is especially true for people whose senses are enhanced by cannabis, which can make peanut butter on a saltine taste like ambrosia so God knows what it can do to the professionally impressive fare of Vegas.

To find out, I got myself blissed out on a series of infused pre-rolls from the downtown branch of Canopi, waited for the munchie itch to hit, then steered myself towards a series of Vegas eateries, starting with… 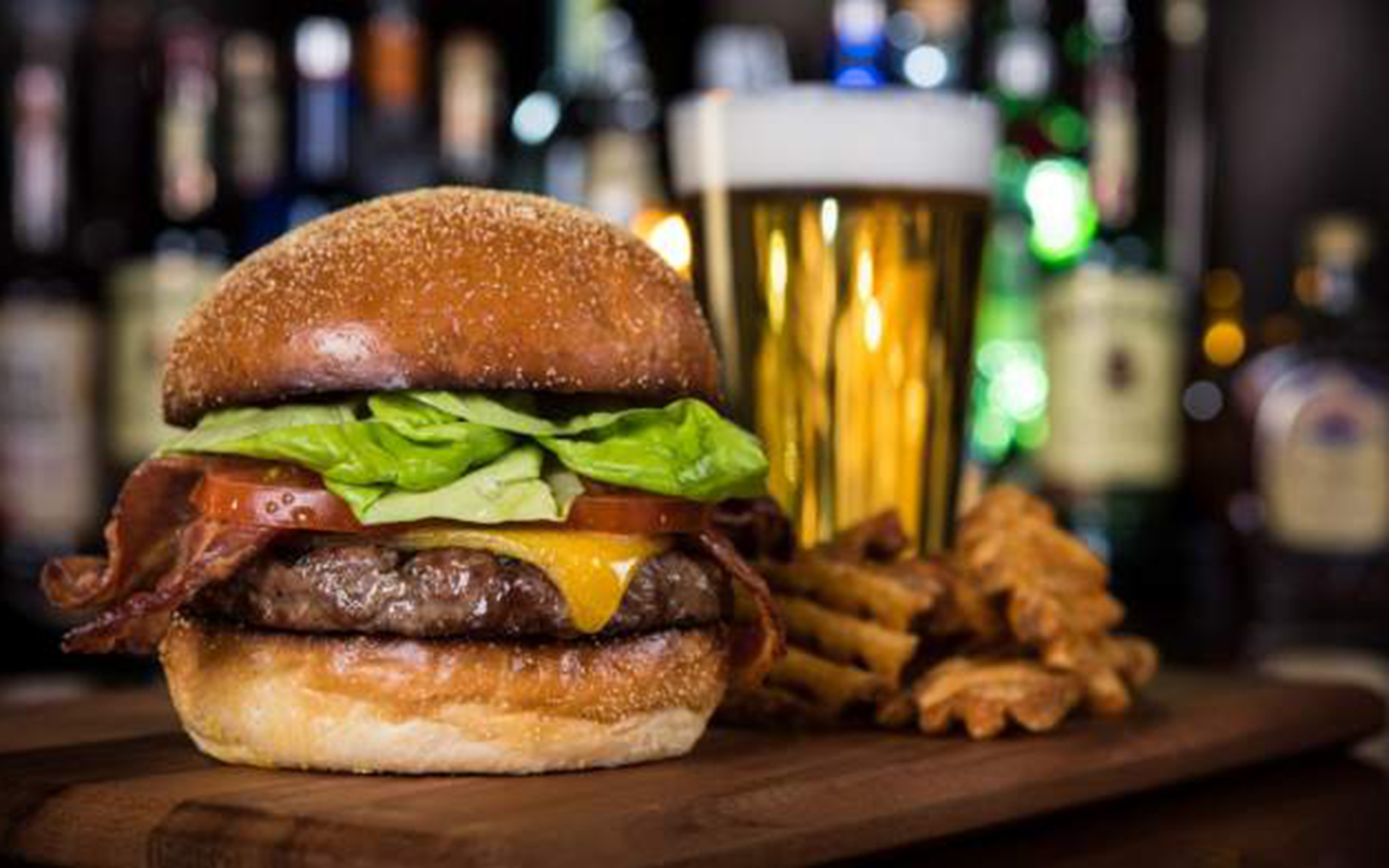 Located in the mini-Eiffel-Tower-enhanced Paris Las Vegas Hotel, Burger Brasserie bills itself as a “sports bar with a French twist!”—cheeseburgers are available with brie, and instead of cheerleader outfits, hostesses dress in lingerie. It’s like the fanciest Applebee’s you’ve ever seen, staffed by Vanity 6.

It’s like the fanciest Applebee’s you’ve ever seen, staffed by Vanity 6.

En route to a show at the nearby Bally’s and unwilling to clobber my munchies with a full-on, potentially sleep-inducing feast, I ordered sensibly, restricting myself to a $14 cheeseburger with a veggie patty and zero milkshakes. Among the jilted shakes: the Cap’n Crunch, featuring vanilla ice cream, Cap’n Crunch cereal, and Captain Morgan spiced rum; and the Peanut Butter and Chocolate, featuring both name-checked ingredients plus amaretto.

As is morally correct, Burger Brasserie’s veggie burger featured the classic Morningstar Farms-style patty preferred by everyone who’s ever smooshed a fancy chef-made veggie patty out the sides of an artisanal bun. Yes, flavor is important, but so is structure, and if your veggie patty can’t withstand a human bite without crumbling, you suck.

The food was good, the menu offered something for every budget, and the service was speedy. Though that might’ve just been the servers trying to keep warm in their camisoles.

Cravings at the Mirage 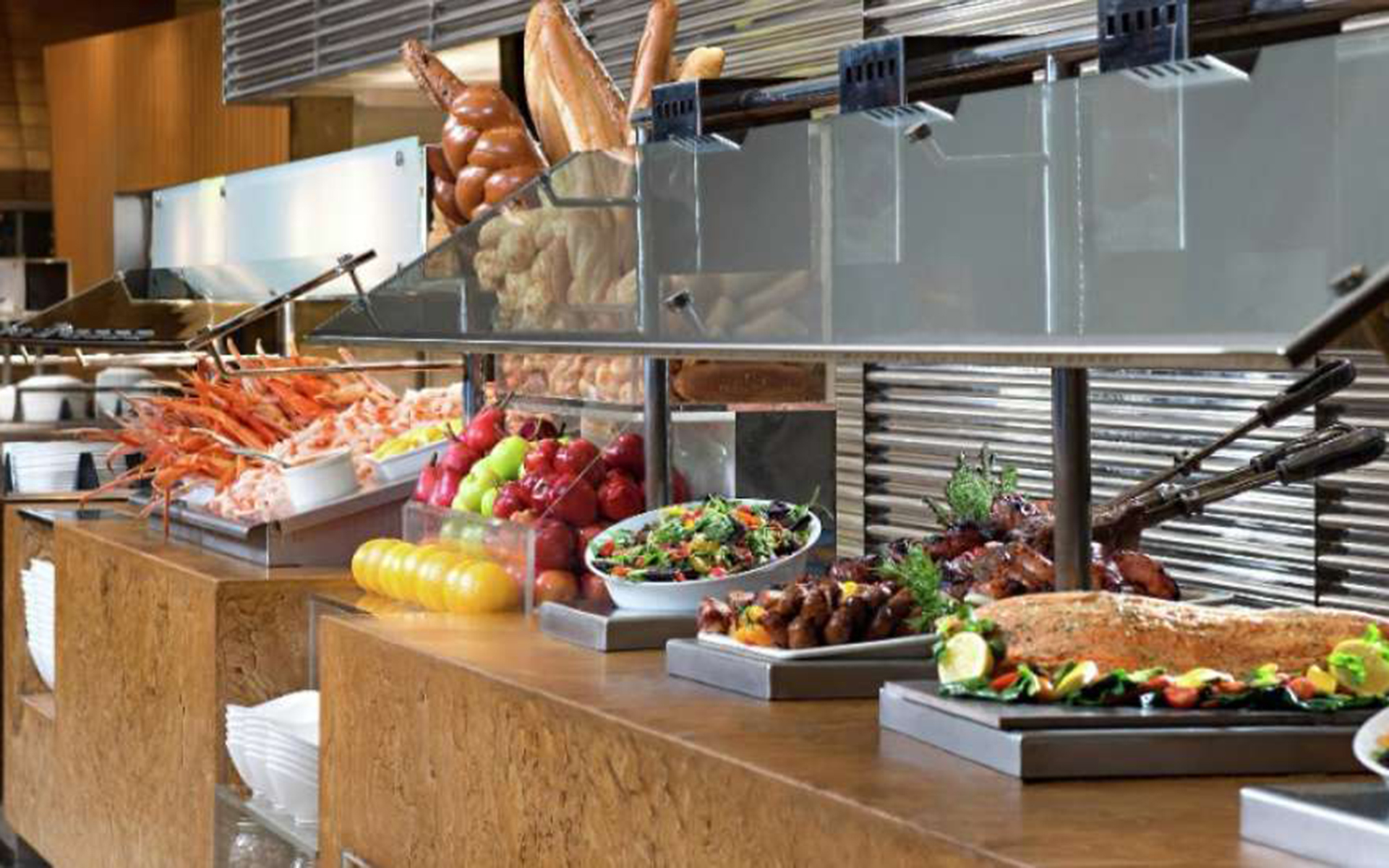 Cravings buffet, AKA Six Flags for your mouth. (Courtesy of Mirage)

Vegas is famous for its all-you-can-eat buffets, and I sought out one of the most beloved: Cravings at the Mirage, where $30 buys you access to an expansive universe of food plus unlimited beer and wine (!).

Our plan of attack for the buffet: Aim for stuff we’d never make for ourselves at home.

Billed as “the Ultimate Buffet,” Cravings is essentially Six Flags for your mouth. Along its walls reside eleven cooking stations, each representing a distinct locale and a crowd-pleasing approximation of its cuisine. (The “Latin” station features a taco bar, the “Asian” station offers sushi, and the three-quarters of the earth covered by water is repped by The Fishmonger.)

With me at Cravings was my guy Jake, who was also very high and pitched a sensible plan of attack for the buffet: Aim for stuff we’d never make for ourselves at home.

For Jake, this meant early Thanksgiving at the Cravings carving station. He returned with sliced turkey, mashed potatoes and gravy, and mac n’ cheese and returned for seconds. “Hot sliced meat is what carnivores come to buffets for,” he explained.

For me, it meant a tightly focused exploration of Foods Made Soggy by Cheese. From the Latin station, I got a small plate of queso-drenched tortilla chips. From Italy, a sensible platter of fettuccine alfredo. From Jake’s plate, a thief’s portion of mac n’ cheese. And from the Cheesebread Fjord—essentially a make-your-own pizza party with fancy bread—I concocted a portion of pain au soggy frommage.

At the dessert bar, I took revenge on all the shakes I neglected at Burger Brasserie by assembling a Vegas-scaled soft-serve ice cream concoction, loaded with every ridiculous thing I could throw at it with a plastic scoop. I ate a third of it, and felt no guilt. Also, neither Jake nor I took advantage of the free all-you-can-drink booze, but we look forward to the unlimited dab bars of the future. 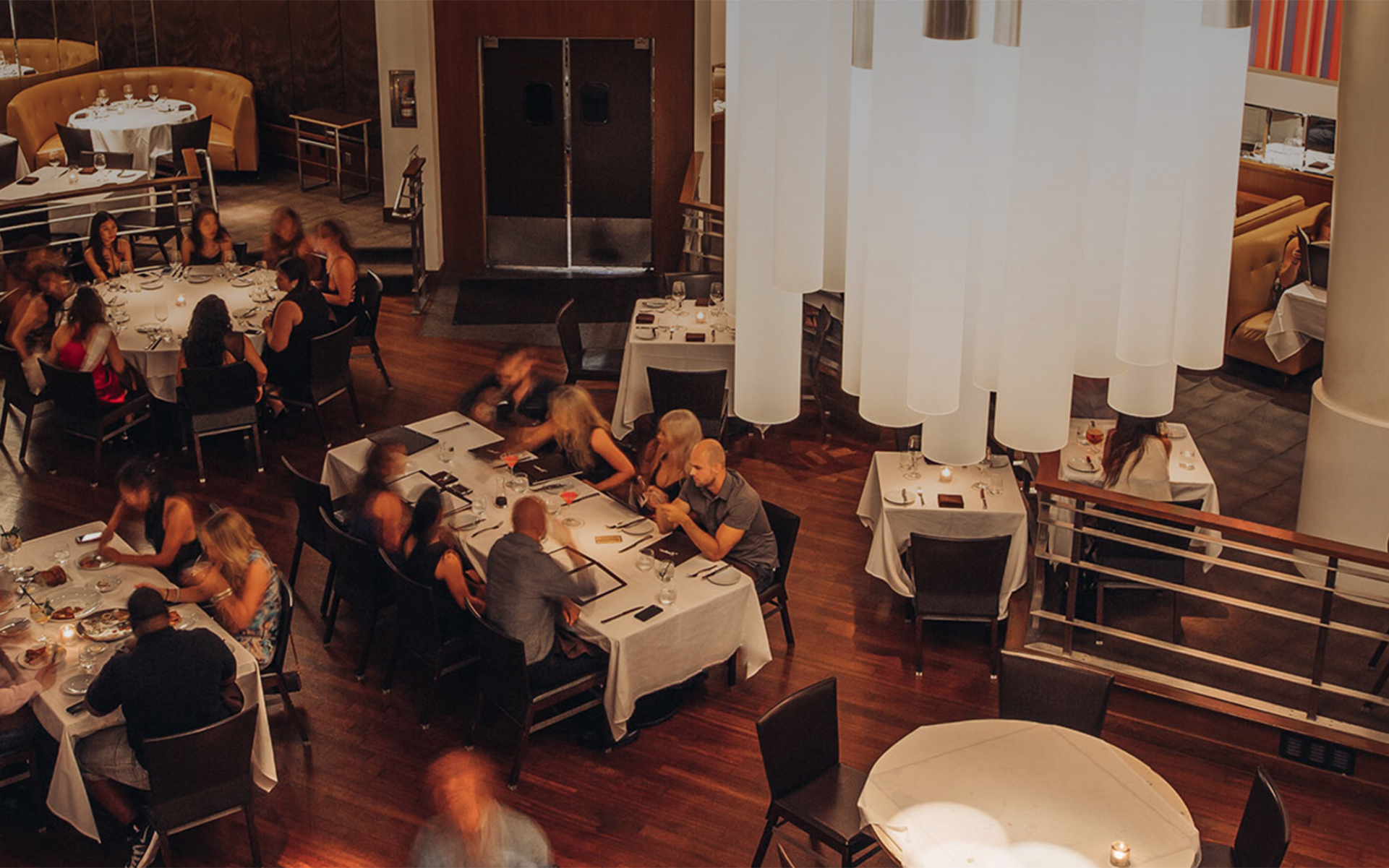 Located in the Forum Shops at Caesars Palace—the upscale mall featuring outlets by Cartier, Chanel, Dior, Gucci, plus a Gap and Cheesecake Factory—Spago is the creation of celebrity chef Wolfgang Puck, and hailed as the spark that ignited Vegas’ current fine-dining scene.

It’s also the site of a crucial scene in the terrible movie Showgirls, and after seating us, the maître d noticed me craning my neck to look around the sprawling dining room. “Is there something I can help you with?” he asked, with professional politeness.

“Um, there’s a scene in the movie Showgirls…”

This was but the first magical moment in my Spago experience.

Offering “seasonal cuisine with global influences,” the Spago menu was, on the day I visited, skewing Italian, so I ordered a classic Caesar salad and the spicy linguine with prawns. Both were straightforward and deeply, perfectly delicious, in that there’s-a-reason-some-chefs-are-worth-$75-million way.

The prawns in particular—grilled to surface crispness and exploding with flavor—sent my high-as-hell ass straight to heaven, with each bite providing a feeling of absolutely certainty that there is nothing better than this.

And then I notice Jake, sitting across from me with his eyes fixed on something over my shoulder. I turn to look, still chewing, and find myself looking in the eyes of a man who very much resembles Siegfried—of “& Roy” fame, but Roy’s not here, just Siegfried, his identity confirmed by his spangled blazer, flowing locks, and luxurious, believe-it’s-me gaze. “I am Siegfried,” his eyes say. “You’re welcome.”

As Siegfried wafts past, I swallow the last of my narcotic prawn, my ultimate Vegas experience unlocked.