How Are ‘Coffeeshops’ Different From ‘Coffee Shops’?

What’s the Difference Between a ‘Coffee Shop,’ ‘Coffee House,’ and ‘Coffeeshop’?

Friends have dubiously recounted stories of how they “totally by accident” have found themselves in a coffeeshop while visiting Amsterdam. To be fair, many first-time visitors to the Netherlands may be genuinely confused by the terms used for different establishments. An establishment license to sell cannabis is always referred to as a koffieshop (coffeeshop). A koffie huis (coffee house) sells coffee and light meals.

Now that we know the difference between coffeeshops and coffee houses, how would the government properly regulate these cannabis-friendly establishments?

How ‘Continuity and Change’ Led to Tightened Regulation

That sounds like an oxymoron, right? How can something be both continuous while changing? Drug policy in the 1970s and 1980s had primarily been concerned with public health issues, such as heroin addiction and HIV. As these problems became more manageable, issues such as crime gained political attention.

In 1995, the Purple Government published an official policy document called “Dutch Drug Policy: Continuity and Change.” To an extent, this policy paper represented continuity in that it recognized that the separation of soft and hard drugs had been successful and that coffeeshops had played an instrumental role. The low number of young people addicted to hard drugs in the Netherlands compared very favorably to the rest of Europe.

On the other hand, the policy document highlighted the issue of nuisance associated with coffeeshops and brought to attention the influence of criminal organizations. The government expressed concern about its international reputation and worried that it could become an “export nation of cannabis.”

“Continuity and Change“ ushered in a tightening of regulations for coffeeshops, including:

The document sought to reduce the influence of organized crime in the supply of the coffeeshops as much as possible, by giving small-scale cultivation low enforcement priority. While it moved towards somewhat stricter policies on recreational cannabis use after 1995, the Netherlands did become the first country to legalize cannabis use for medicinal purposes in 2000. Since 2003, medicinal cannabis has been available in pharmacies for a number of medical conditions as prescribed by a physician.

In Part 3 of our series exploring the rise of Dutch cannabis coffeeshops, we take a closer look at some of the problems plaguing the coffeeshop system and whether or not coffeeshops pose a danger to society, as a few cabinets alleged. 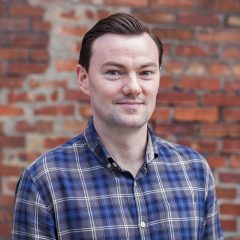