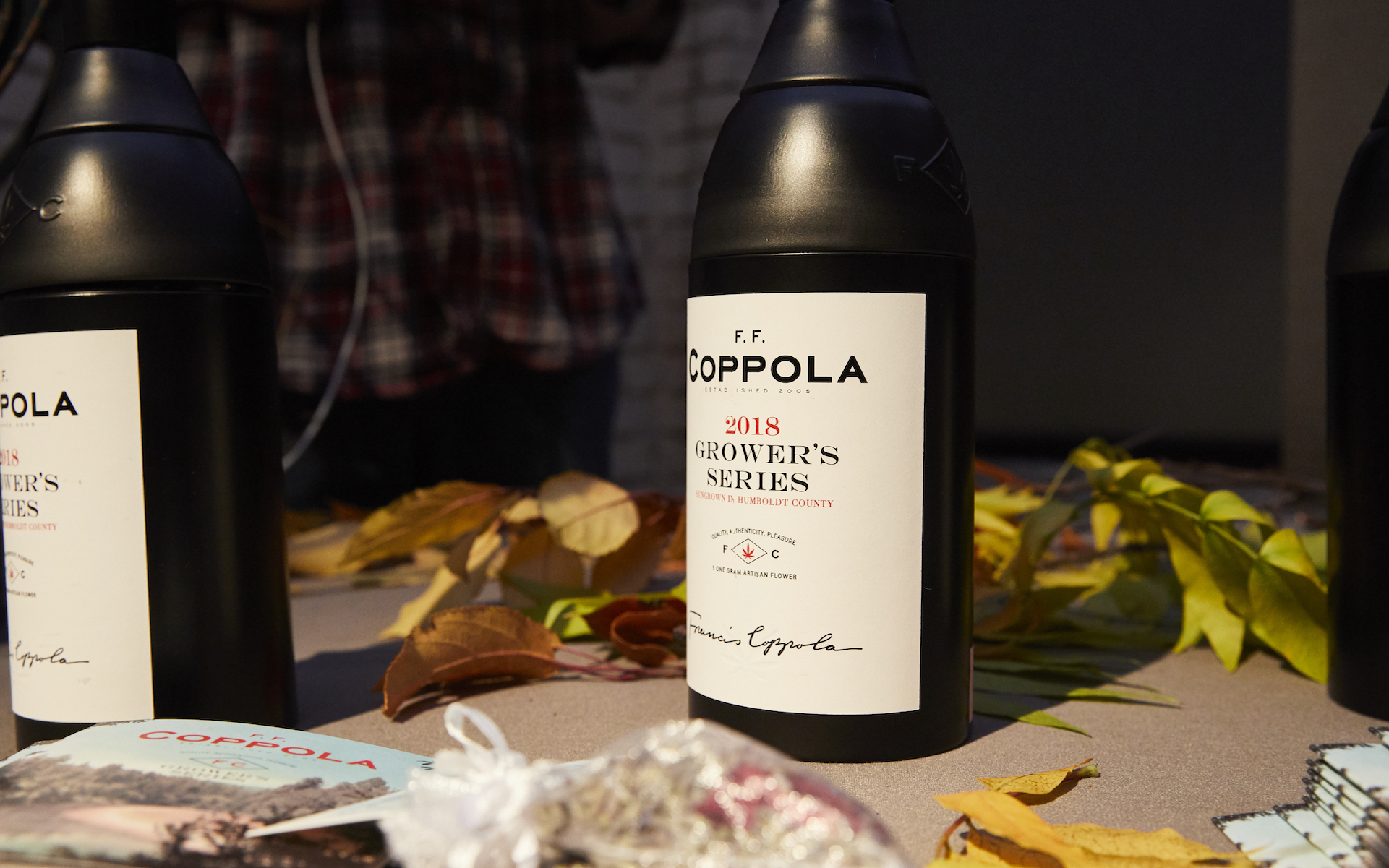 In Vino Cannabis: Film icon Coppola slings grams of Sour D, Tangie, and Blue Zkittlez. (Courtesy The Grower's Series)
The French term terroir typically refers to the region, and the soil, in which particular wine grapes are grown. The earthy term lives at the heart of wine nerdom and the wine industry, as well as the quality of wine itself. These days, however, you’ll hear more and more about cannabis terroir.

The Godfather director Francis Ford Coppola stands perfectly poised to capitalize on the notion of terroir in the cannabis industry. Coppola already owns and operates one of Northern California’s most prominent vineyards, just north of San Francisco, and his decision to embrace cannabis is a savvy one.

His new venture, “The Grower’s Series,” presents cannabis in a professional, and precious, package that will likely appeal to high-end consumers.

“Wine and cannabis are two ancient and bounteous gifts of Mother Nature, linked by great care, terroir, and temperateness,” Coppola remarked in a recent press release. “Expertise making one applies to the other.”

So Coppola launched a new company called Sana to create the product, and enlisted Kathleen Murphy, the innovation director at his winery, to bring it to life.

“[Our target audience is] people who don’t have a lot of experience with cannabis,” Murphy told me. “Us not having experience really worked for the project.”

But does Coppola or Murphy actually toke at all? Murphy declined to offer any further details.

Coppola doesn’t grow cannabis, either. He teamed up with veteran farmers Humboldt Brothers to grow three strains: a sativa, indica and hybrid. Each is noted by the location and elevation at which it was grown. Sana also partnered with the bougie cannabis lifestyle brand The Herb Somm, who arranged a series of coming out parties for “Grower’s Series.”

Coppola’s cannabis is packaged to look like wine bottles; each painted, bottle-shaped tin includes three one-gram bags of the strains Sour Diesel, Tangie, and Blue Zkittlez, plus a pipe, rolling papers, and matches. It looks like something you’d bring on a picnic. The package sells for $99 before tax and delivery fee, and is available through California adult-use delivery service, Chill.

“There’s a lot you can parallel with the wine world,” Murphy said. “We are tapping into individuals who are wine drinkers who may be intimidated by cannabis by leveraging some of the same language [as wine]. . . . We want to help educate consumers about the different expressions of cannabis.”

To her point, the company describes one strain as being grown where “the climate is warm from continuous sunshine;” another “benefits from cooler temperatures and diverse soil.”

Murphy made clear that Coppola is not shifting his entire operation to cannabis. In a year that has seen huge corporations like Coca Cola sniffing out cannabis, Coppola’s move is on a far more minor scale, and was intended largely for the holiday audience. Hopefully, however, it will make an outsized impact on those who otherwise wouldn’t be trying it.

“It’s a fascinating industry,” Murphy said. “Once you scratch the surface, there’s so much more in there than [the stigmas]. I just want to guide consumers into this pretty intimidating space.”

Coppola better hope he reaches that naive, untapped mainstream. The limited-edition, holiday packages remain in stock this January. They run $122 with tax and delivery fee—for three grams of flower; the equivalent of $40 per gram.

Grower’s Series strains proved excellent-tasting, and potent. But the small buds also looked weathered, and smelled mediocre compared to California’s most expensive flowers from its best growers—The Village, or 710 Labs—which are half as pricey as Grower’s Series. Is novelty alone worth an extra $60?

—David Downs contributed to this story

Would you try Francis Ford Coppola’s three grams for $99? Or are you more like, ‘Fuggedaboutit!’