LGBTQ, Cannabis Cultures Unite in These Pride Products for 2019 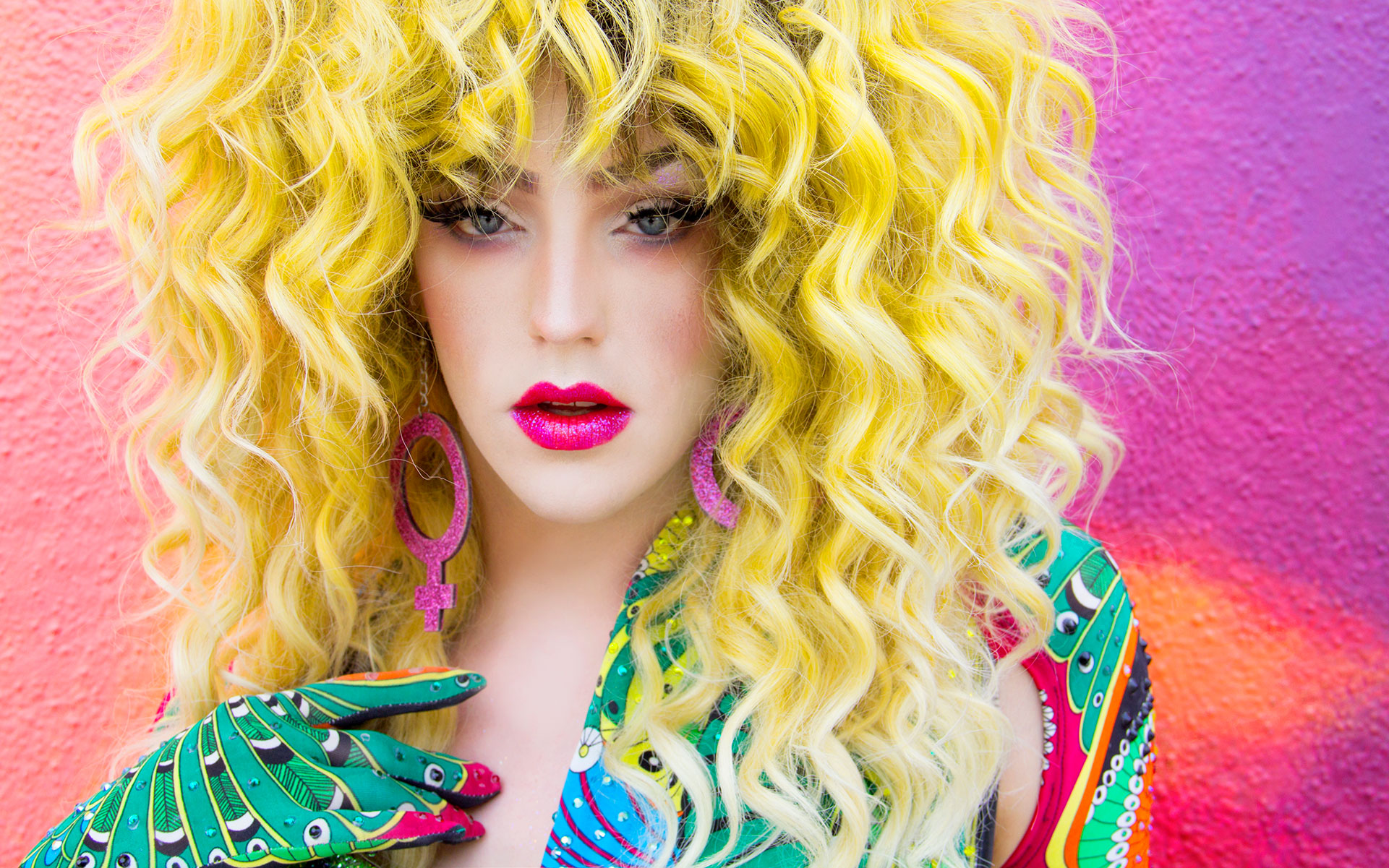 RuPaul's Drag Race contestant Laganja Estranja has released a Passion Pride Fruit Slab. (Courtesy Fruit Slabs, Laganja Estranja)
LGBTQ Pride celebrations happen throughout the month of June in the US, and the increasingly mainstream embrace of a free-wheelin’, rainbow-draped party season along with legal cannabis means crossover marketing is here.

Being an effective ally to those in the lesbian, gay, bisexual, transgender, queer, intersex, and asexual community requires more than simply slapping a rainbow on your product, though. Look deeper and you’ll find that the cannabis movement and the LGBTQ movement have long intersected and supported each other, with pivotal figures such as Dennis Peron and Brownie Mary Rathbun working to legitimize medical marijuana and improve legal access for desperately ill AIDS patients in San Francisco in the 1980s and ’90s. That movement blossomed with the passage of Proposition 215 in 1996, thanks in no small part to the efforts of Peron and his many co-conspirators, friends, and associates.

Today, with the widespread acceptance of same-sex marriage and legalized cannabis, it’s tempting to think that there’s no need for activism, but it’s important to remain vigilant and protect our hard-won rights. Entrepreneurs who lived this history understand that businesses hoping to become a part of the community should give back through activism.

When highlighting these Pride-themed cannabis products, we looked for authentic engagement with the community and a commitment to donating to LGBTQ causes, as well as businesses founded by gay, lesbian, bisexual, transgender, and queer people. While Pride celebrations happen for just a month, it’s important to be an ally all year long!

Look out for these special Pride products in the epicenter of change—California.

Take Pride in Your Lifestyle? 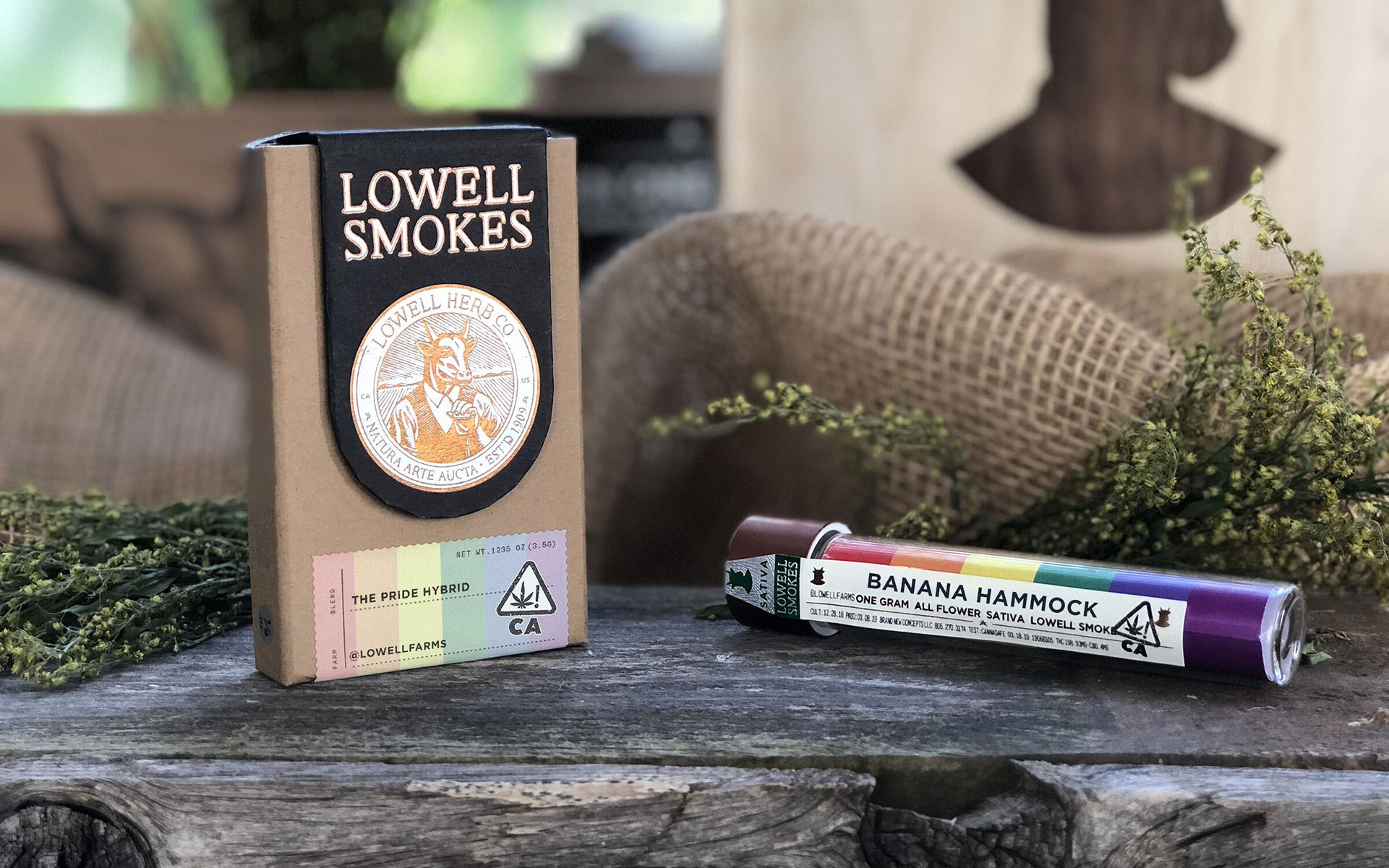 When designing their Limited Edition Pride Pack, Lowell Herb Co wanted to support creative female entrepreneurs while giving back to the LGBTQ community, so the cannabis company partnered with Dina Rodriguez of Letter Shoppe to create a piece of art.

“When I was approached to create this unique poster design, it felt like it was a dream project,” Rodriguez wrote. “It’s ideal to be able to work with like-minded brands that believe in a better world where women and the LGBTQ community have a stronger voice.”

Directly benefiting the LGBTQ community through the first ever partnership between GLAAD and a cannabis brand, 10% of the sales from each Pride Pack purchased in June will be donated and every customer will receive Rodriguez’s poster as a gift. 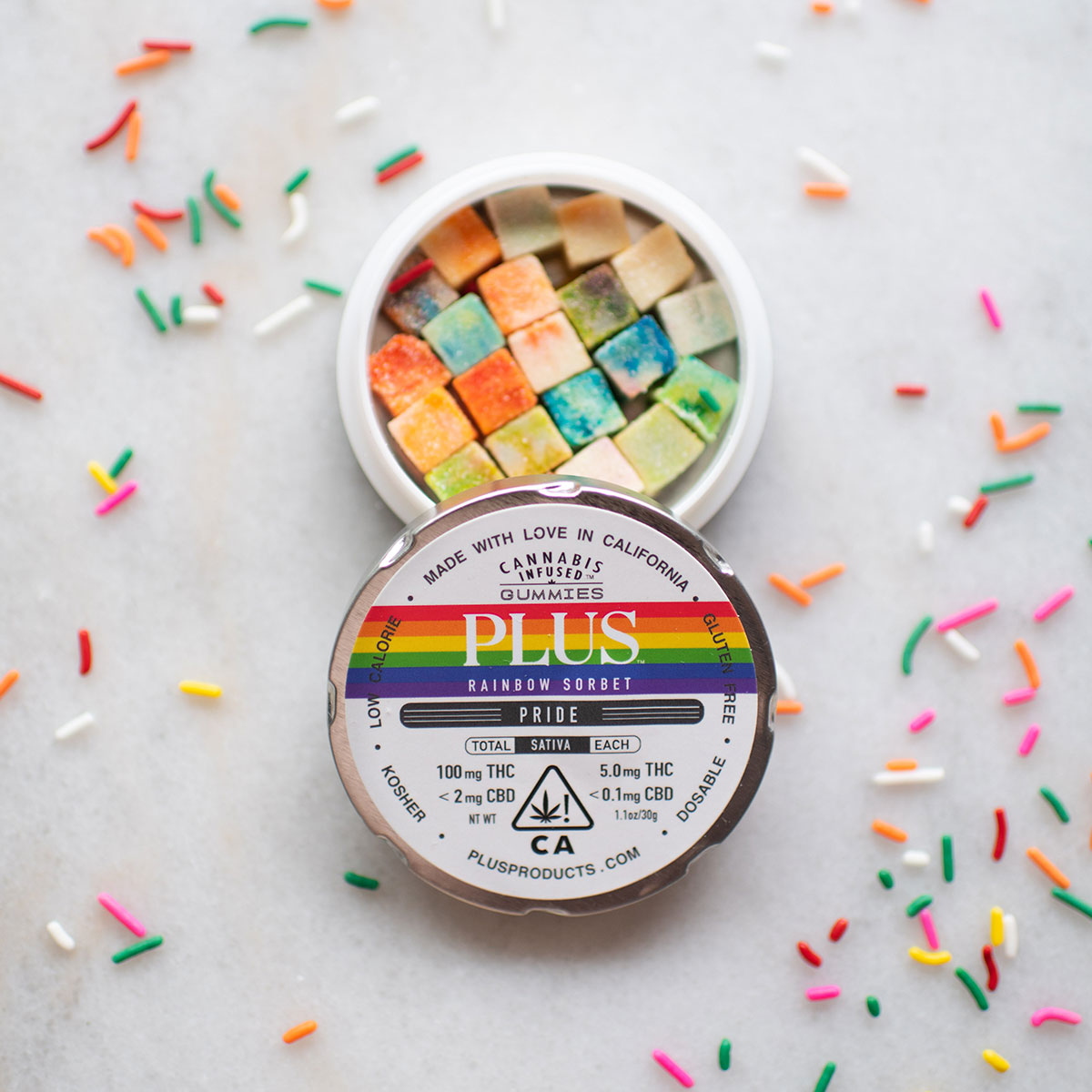 (Courtesy of Plus Products)

The best-selling seasonal flavor of 2018 is back! Look for Plus Rainbow Sorbet gummies, a favorite for microdosing throughout the day. Each precisely dosed gummy contains 5 mg of THC, and each tin contains 20, making this a fun way to share cannabis with friends.

For every tin sold, $1 will be donated to the San Francisco LGBT Center, whose mission is to connect the city’s diverse community to opportunities, resources, and each other to achieve a stronger, healthier, and more equitable world for LGBTQ people and their allies.

“Compassion is a powerful force behind the national cannabis movement,” said Jake Heimark, CEO of Plus. “What I appreciate about the SF LGBT Center is that it offers services, education, resources and advocacy to a community that has spent decades helping normalize cannabis.”

Why You Should Support AIDS Walk SF: An Interview with Team Cannabis Founder Dan Grace

Pride month inspired the Fruit Slabs to team up with cannabis advocate, social influencer, and RuPaul’s Drag Race contestant Laganja Estranja to create a new Passion Fruit flavor. “We believe Pride should be celebrated every month of the year, so the Passion Pride Fruit Slab will be available in stores year round,” said Fruit Slabs President Roxanne Dennant.

This all natural, vegan, single serving of fruit leather contains 10 mg of THC, and the combination of mango, passion fruit, lemon and lime will tickle your tongue with tangy sweetness.

“I have always wanted to curate a delicious, healthy edible,” said Estranja. “It’s important for the cannabis industry to recognize the LGBTQ+ community that built their very foundation, especially here in California with Proposition 215, and not just during Pride season but year round.”

Extract artist Jetty and vape maker PAX are teaming up again to reintroduce the Reckless Rainbow strain for PAX’s Era Pods, with a portion of sale proceeds going to the GLBT Historical Society—the first museum in the US dedicated to the LGBTQ movement and community. On top of the proceeds from the pod sale, PAX is also donating an extra $50,000 to the GLBT Historical Society, and PAX hosts events at San Francisco and Los Angeles Pride. 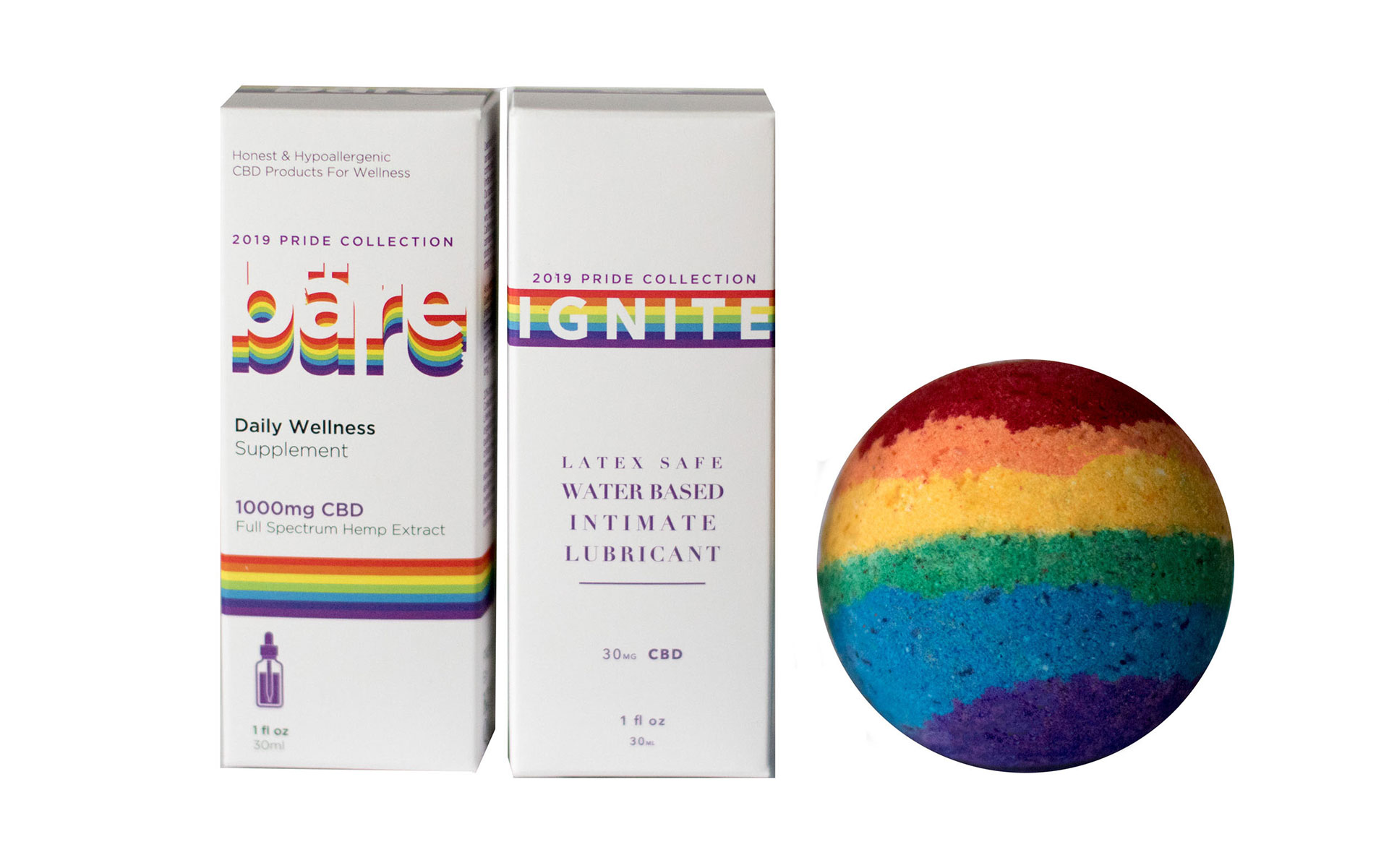 Dedicate time to self-care with a luxurious rainbow bath bomb infused with 25 mg of CBD and essential oils intended to relax the body and relieve stress. Follow up with Bäre Tincture, a vegan wellness supplement containing 1,000 mg of full spectrum hemp CBD suspended in non-GMO extra virgin olive oil. Drizzle on top of meals or simply place under your tongue to absorb the cannabinoid goodness. When it’s time to get sexy, use the water-based, latex-compatible, CBD-infused Ignite Lube to reduce tension and potentially amplify orgasms.

What to Buy When You’re Uptight About Cannabis 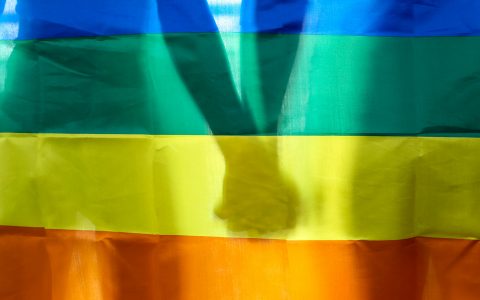 Is the Cannabis Community Ignoring Its LGBTQ Customers? 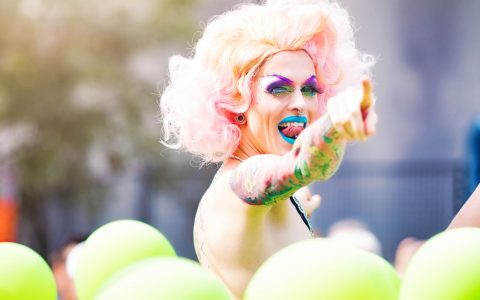 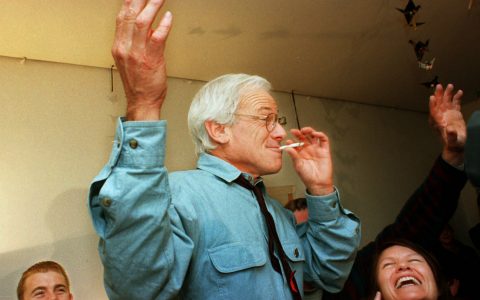 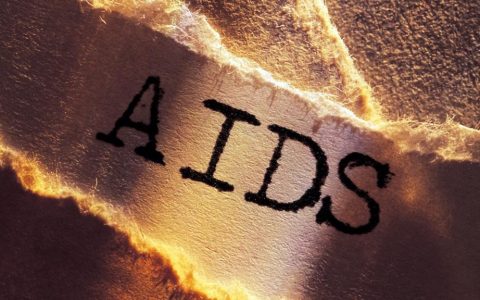