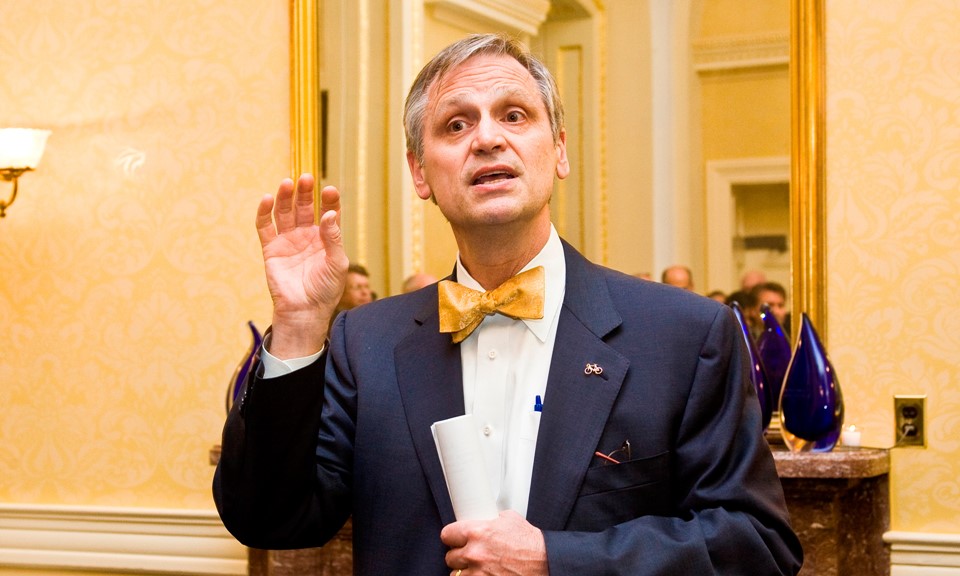 Oregon Congressman Earl Blumenauer (D-Portland) has been a champion for drug policy reform since he was first elected to Portland City Council in 1986, moving up to gain a seat in the House of Representatives in 1996. Don’t be fooled by the charming bicycle pin and unassuming smile — when it comes to fighting for justice, Blumenauer is Batman in a bowtie.

Not only was he a huge proponent for removing hemp from the definition of cannabis in Oregon, removing the barriers to create an industrial hemp revolution, but he has also written repeatedly to the president, most recently to ask for a new appointee to take the place of Chuck Rosenberg as head of the D.E.A. after Rosenberg made troubling remarks.

Leafly caught up with Blumenauer as he prepared to embark on a tour of states with cannabis reform on the ballot this November. He’ll be speaking in California in early May in support of the Adult Use of Marijuana Act, and continuing on to Nevada, where he’ll speak in favor of that state’s legalization initiative, Question 2.

Leafly: What is your goal for supporting cannabis in the upcoming months?

Rep. Earl Blumenauer: My goal is to be in every state that’s in a battle to modernize its marijuana laws. I’m going to be looking at California, Nevada, Maine – which you may have noticed got back on the ballot, despite efforts to knock it off. This week I’m going to New York for the United Nations’ effort to modernize international drug laws.

My goal is to be a resource. I’ve been to any number of states, I’ve talked to editorial boards from the New York Times to the L.A. Times, and lots of publications large and small. I’ve even had a meeting on marijuana reform in Texas. I think those people were committing a felony just by meeting me in Texas. I say that only slightly in jest.

My goal is to speak out about the experience I’ve had. I was in the Oregon Legislature when we were the first state to decriminalize, in 1973. Just before that we had a proposal that would have legalized adult use in Oregon. We would have beaten Colorado and Washington by 30 years.

We had a debate at the Brookings Institution last night, which was kind of fun. They rolled out some of the trusty naysayers. It was a packed house. In the audience, believe it or not, was a person who was in the gallery of the Oregon House of Representatives when I was there speaking, arguing, arm-twisting back in 1973. He was there!

How has legalization changed Oregon?

We’re developing a model that we think can be used in any state. Legalization has already resulted in a significant amount of economic activity. We’re watching people who are extraordinarily excited about making this enterprise fully accessible and transparent. There are an amazing number of people in the industry that I’ve met who want Oregon to be the gold standard. They want to treat their employees fairly, they want to be good neighbors. It’s fun watching people on the ground floor trying to do it right.

We passed our measure over 18 months ago. No big rocks fell out of the sky, no cracks appeared in the earth. Most days, the sun continues to rise and set. People are accepting this as a reasonable way to treat a legitimate legal product.

Last week in Portland, I had three people — pillars of the community, baby boomers, extraordinarily successful and accomplished people — in three different conversations describe to me how they had used medical marijuana to deal with some physical challenges. Two had been in accidents, and one had a significant and painful operation. In normal conversation they nonchalantly mentioned that they went to facilities and got legal marijuana to deal with their ailments. And they told me how effective it was. Two or three years ago that wouldn’t have happened.

What do you find to be the most troubling aspect of the ongoing war on drugs?

Where do I start? What I find deeply troubling is the flawed premise of marijuana prohibition. It is absolutely unjustified, inequitable, and it falls most heavily on, as you know, young black men.

Some of the draconian punishments that have been handed out will be the shame of our government for decades to come.

I’m glad the president is using his power to grant clemency, taking care of some of the most egregious examples. But there are thousands more.

It’s so exciting, after all these years, to watch the pieces come together. But we still arrested or cited over 600,000 people last year. Fifty-eight percent of the public — maybe more depending on how you ask the question — don’t think marijuana should be illegal. Probably 75 percent of the public think that states ought to have their own marijuana policies. And yet, over 600,000 people were hassled by the law. They got a ticket. They got arrested. That disconnect is really jarring. It motivates me to do everything I can on a federal level to change things.

How likely do you think it is that Obama will deschedule cannabis on his way out of office?

President Obama is the first president to really tell the truth about marijuana. He said he smoked, he inhaled, it wasn’t as dangerous or addictive as other things that are legal. And that is a big deal to have the president of the United States be honest with the American public, unlike some of the officials in the drug bureaucracy.

Second, this administration could have struck down the state legal adult use — and they didn’t! They’re caught between a rock and a hard place. Theoretically it’s still illegal, and there’s lots of change going on. Public opinions are changing.

They issued the Cole Memo. And he started commuting some of these sentences, pardoning people. This is an important contribution. But I would not be surprised if, as part of his legacy, he did something else.

It might be something as dramatic as descheduling, as I hope it is, but I suspect we haven’t seen the last of what the administration does.

I am convinced that the next president of the United States, which I think will be Hillary Clinton or Bernie Sanders, will continue to build on the Obama legacy. They’ll strengthen it. And I find that exciting. I’m convinced the war on drugs will all be over in five years, and probably sooner, if we do our part. It’s not guaranteed. There are forces out there opposing it. But I tell you, the next two or three years, they are going to be phenomenal.

Now is it true that you’ve never used cannabis?

Do you have any desire or interest in trying it?

Well, I will tell you unequivocally that if I or a member of my family had a condition — taking chemotherapy, chronic pain, some of the neurological disorders, PTSD — I wouldn’t hesitate for a moment to use medical marijuana, if I had one of the conditions that cannabis is effective in remedying.

By itself, however, I have nothing against adults who choose to use it, but I have felt that as long as I am kind of the point person, that it is important that it not be confused with thinking that I’m doing this because I use it. I think it strengthens the case that I make to be able to honestly say I’ve never tried it, I don’t use it, I don’t think there’s anything wrong with it, and I’m working to make it legal.

But I truly think it is in the same genre as people who decide they’re going to have a craft cider, a fine Oregon Pinot. This is something a responsible adult ought to be able to decide for themselves, and we shouldn’t criminalize the behavior of people who do. I want to be as effective as I can in this, and I think this makes me more effective.

Tell me about your 4/20 fundraiser.

We’re going to be having some fun with it. At 4:20 a.m. and at 4:20 p.m. on 4/20, we are going to invite people to help be a part of the effort getting the resources so my staff and I can take this show from coast to coast to help with campaigns and make sure we’re successful getting it across the finish line. I’m trying to be that other voice to party delegates, to the media and trying to push the administration from top to bottom. I want to lay the foundation for 2019, when we’ve got a chance to have all of this come to a head because the United States ought to be exerting leadership for reform.

Part of the challenge here is to figure out how to be most helpful, because, well, you know, I do have a day job. I’m working on lots of issues that are important, and then I’ve got the commute across the country every week. There are people who need help with veterans’ benefits, and some of my crazy Republican friends in Congress have some things that we have to kind of push back on. There are some fascinating things in terms of health care reform, and food and agricultural policy reform, and nuclear weapons, so we’ve got other things. But this, this can be all-consuming.

On a personal note, I adore your bicycle pin.

The bicycle pin, I will tell you, is another one of these things — it makes people feel good. It’s simple common sense. We need to do more of that in politics. We can do it with cannabis reform, we can do it with bicycles. We don’t have to make it as hard as it is.