Patrick BennettFebruary 5, 2019
Share
Share on Twitter   Share on Facebook
Print
(Leafly)
Terpenes provide a wide variety of aromatic properties ranging from floral and earthy notes to musky and citrusy ones. When it come to the spicier side of the spectrum, caryophyllene holds the trophy for the most flair.

The terpene caryophyllene is present in many herbs and spices, including black pepper, basil, and oregano, and cannabis strains with high levels of it deliver a spicy, funky warmth to the nose, similar to cinnamon and cloves. 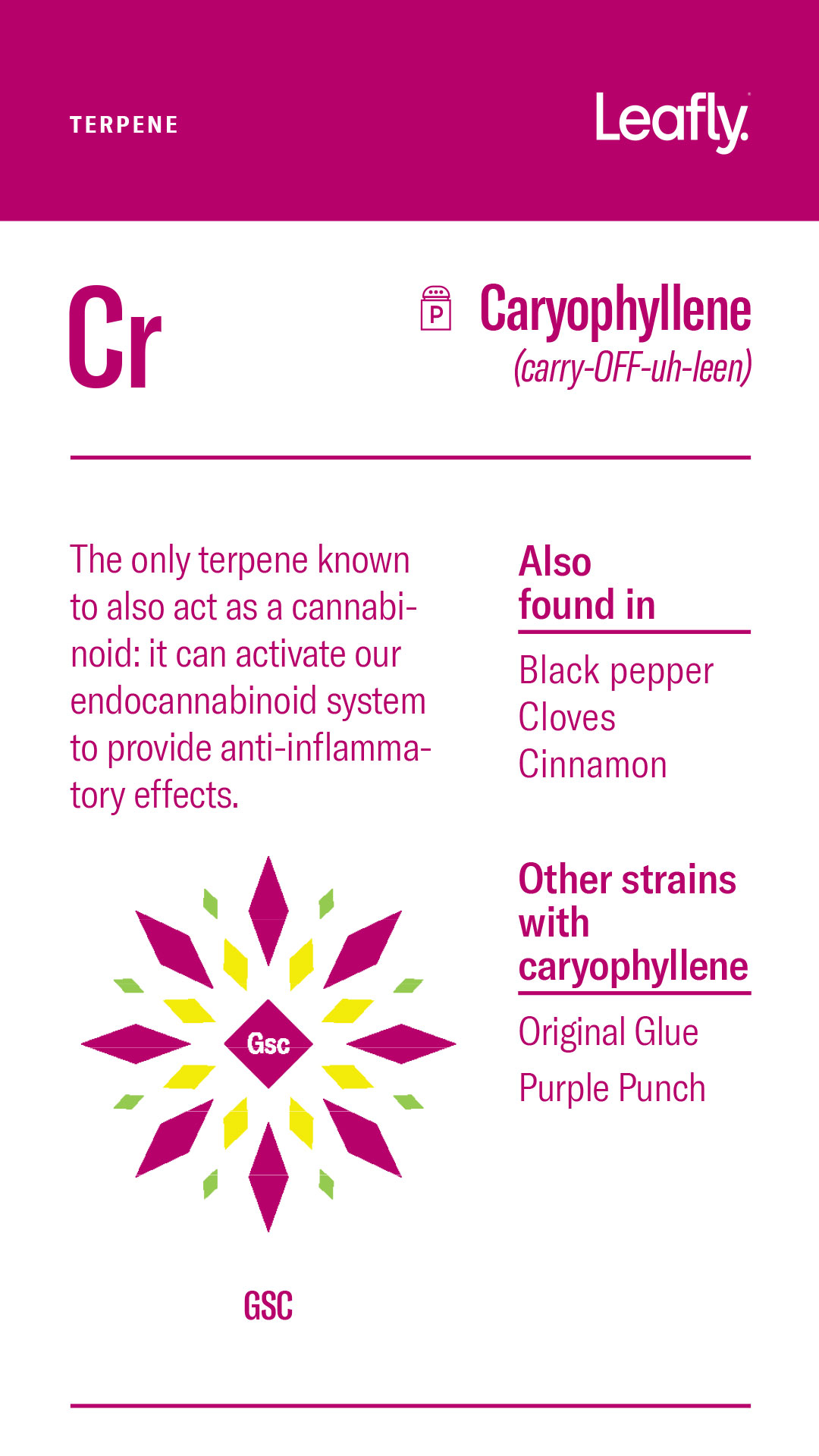 What makes caryophyllene an intriguing terpene is its relationship with our endocannabinoid system, particularly, its ability to bind to CB2 receptors. Because of this, it comes with a host of potential medical benefits.

Also called beta-caryophyllene or BCP, this terpene can be found in aromatic oils like rosemary and clove oil, and in nature it’s most commonly found in hops, cloves, black pepper, oregano, cinnamon, and basil. It’s responsible for the slight bite of pungency associated with smelling cracked pepper.

Caryophyllene is a bigger molecule than terpenes like myrcene and limonene. Caryophyllene’s molecular structure also contains a cyclobutane ring, something rare in nature and not found in any other known cannabis terpene.

The human body’s endocannabinoid system contains a vast network of receptors located throughout the body. Two major types exist: CB1 and CB2 receptors. CB1 receptors are primarily located in the brain and central nervous system, while CB2 receptors are found mainly in our peripheral organs.

When a cannabinoid such as THC is ingested, it primarily binds to CB1 receptors located in the brain and central nervous system, producing a euphoric effect.

The unique molecular structure of caryophyllene allows it to easily bind to CB2 receptors primarily located within our peripheral endocannabinoid system. This means that is doesn’t cause any of the euphoric feelings of cannabis while providing many of the benefits associated with activating those receptors, like reducing inflammation.

It’s unlike any other terpene because it is the only one that has the ability to directly activate a cannabinoid receptor, especially CB2 receptors.

Cannabis strains with high levels of caryophyllene tend to be spicy and musky, and some are also known to have a funky profile. Many carry prominent notes of diesel and fuel that are known to cause the same nose-tingling bite associated with taking a whiff of pepper.

Some strains with a higher-than-average amount of caryophyllene include:

This stress-relieving terpene is also present in many hybrids known to cause relaxation and reduce anxiety. Given its unique aromatic notes, it’s fairly easy to detect in a strain.

The potential benefits of caryophyllene

Studies on caryophyllene indicate a wide variety of therapeutic potential. A 2014 study shows pain-relieving properties of the terpene in mice, and another rodent study shows caryophyllene’s potential to reduce alcohol intake, making this terpene a possible treatment for addiction.

Caryophyllene has also been shown to have antioxidant and anti-inflammatory properties, and to be a possible therapy for treating inflammatory bowel disease. Research has even found that caryophyllene may be able to treat anxiety and depression.

Current studies are hoping to unveil even more of the therapeutic potential behind caryophyllene, including research indicating that it may help with lifespan longevity by reducing gene stress.