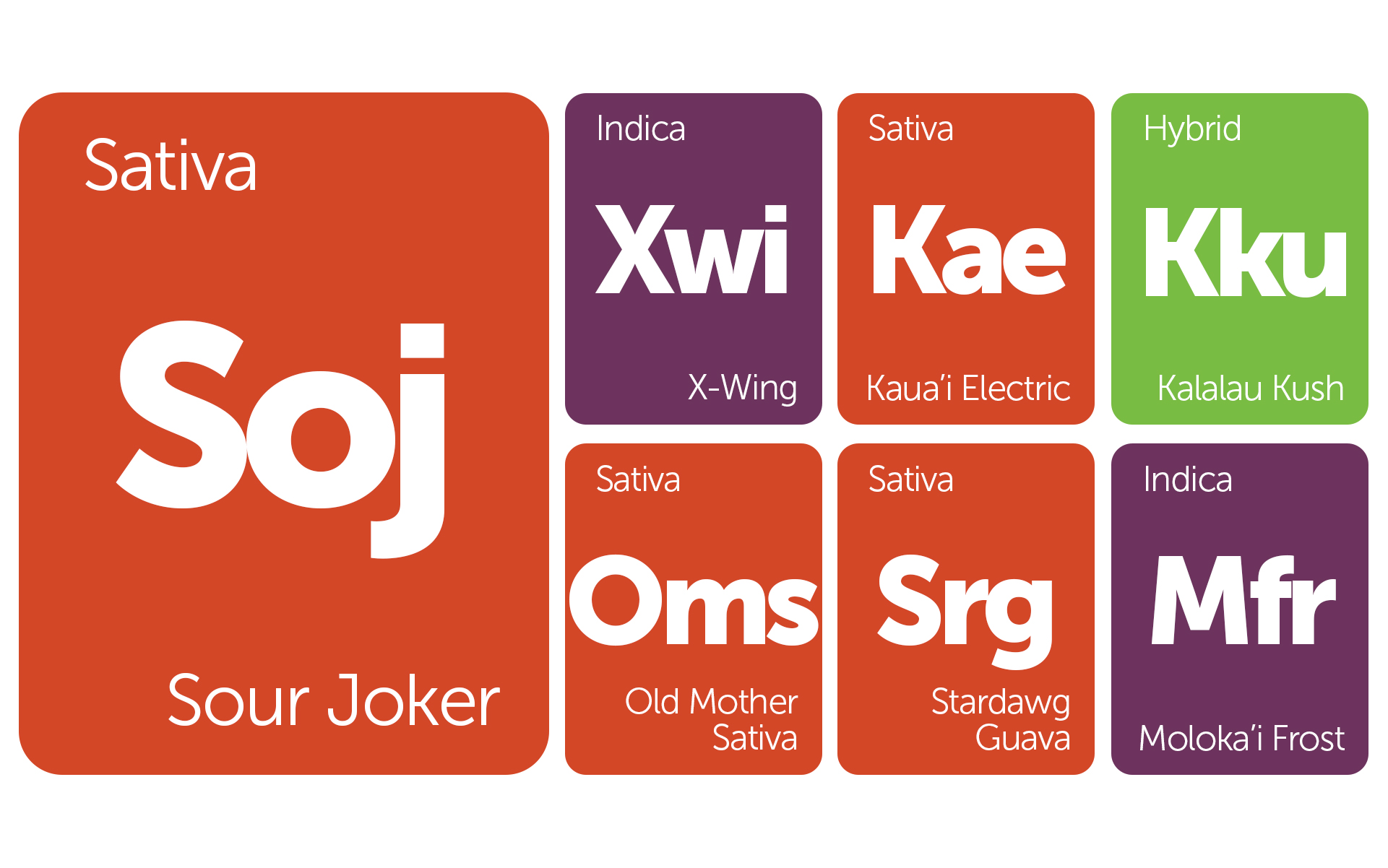 This week’s New Strains Alert is a surprisingly sativa-dominant bouquet of flowers from Hawai’i, the circus, and a galaxy far, far away. We’ve added three distinct Hawaiian landrace strains that are loaded with tropical terpenes and history. For all the Chemdawg enthusiasts, dig into some Stardawg Guava, which combines two awesome Chemdawg cuts, Chemdawg 4 and Tres Stardawg. Hang loose, y’all, and be good to each other.

Moloka’i Frost (also known as Moloka’i Hashplant) is a potent sativa-dominant strain with a robust medicinal history. In 1969, residents of the Lalaaupapa Moloka’i leper colony were allowed to leave and access modern medicine. But a special medicine also left the Kalawao Valley (pronounced ka-la-wow), too. This flower grows like a sativa, but exhibits extremely powerful indica-like effects, including heavy sedation, strong analgesic effects, and latent euphoria that complements this strain’s heavy body elements. This rare resinous flower is a Hawaiian landrace worth seeking out.

Kalalau Kush is a stimulating sativa-dominant hybrid named for the beautiful Kalalau Valley on the garden island of Kaua’i. This flower smells of guava with herbaceous undertones. The flavor is tropical, exhibiting hints of mango and musky spice. Kalalau Kush offers consumers potent cerebral energy and vigorous physical stimulation. It is ideal for outdoor activity and for patients combating depression and lethargy. This strain is produced by Pua Mana 1st Hawaiian Pakalōlō Seed Bank.

Kaua’i Electric is a Hawaiian landrace sativa that has been cultivated on the Powerline trail near Mt. Wai’ale’ale, also known as the rainiest place on Earth. This hearty sativa exhibits a range of bright tropical colors and smells of passionfruit and guava. The flavors are fresh and tropical with an aftertaste of skunk and earth. Kaua’i Electric has a carefree cerebral energy while leaving the body light and blissful.

Sour Joker is the stimulating sativa blend of Amnesia Haze and East Coast Sour Diesel (ECSD). This amped combination offers consumers a vigorous body buzz that is clear-headed and motivating, encouraging physical activity in or outside. Harness the mental clarity of this strain at lower doses and the fueled-up stimulation with continued use.

Stardawg Guava won first place for “Best Sativa” at the 2012 Denver Cannabis Cup. This strain hits the consumer square between the eyes with uplifting sativa stimulation and then cascades over the body with a subtle, vibrating warmth. Its aroma is mild but doesn’t lack nuance, expressing notes of pine, cheese, and tartness. A latent chemical flavor rolls off the palate with a clean, earthy finish. Enjoy this strain to relieve stress, mute depression, and curb minor physical aches and pains.

Old Mother Sativa is an enormous plant with uplifting, euphoric effects. This strain is believed to have originated in Southeast Asia, but gained popularity in Australia during the 60’s and 70’s. With bushes that can reach upwards of fifteen feet tall, this flower grows well in a variety of climates. Known for its resistance to drought and its long growing season, Old Mother Sativa yields a wealth of frosty buds, given the time to flourish. Expect happy, uplifting effects that nullify stress and imbue the consumer with a giddy sense of wellbeing.