Best in State: The Top Cannabis Locations, Products, and Activities in Oregon in 2017

Our Best in State series spotlights the top cannabis dispensaries, companies, products, and activities in the largest cannabis markets in 2017.

Many years ago, I developed an inkling of an inclination that I liked cannabis. At the time, I was—as we all were—buying whatever skunk my buddy, or his buddy’s buddy, could sell me. Over time, as I became more interested, I start reading online about cannabis law, and cannabis history, and dreaming of a day when, you know, they would just figure it out. They could tax it, and I could go to the store and buy cannabis the same as liquor, or tobacco, or chocolate. It felt like a wild dream, and yet so obvious.

Fast forward to today and younger me can hardly believe it—holy shit, they figured it out. We’re through the looking glass here, people. Oregon cannabis in 2017 is a Roman Bacchanal, a moveable, smokeable feast of glorious indulgence the likes of which I dared not dream in my younger years. There has literally never been a better time to love cannabis in Oregon. No hyperbole, no exaggeration—never in human history. You can tell your children you lived through a golden age: the tip of the spear, the cusp of the wave, the moment when cannabis became culinary, cultural, societal, casual, progressive, capable of righting past wrongs and making new myths, delicious, relieving, personal, political, capitalist and yet for the greater good, new and yet rooted in the past, the old, the ancient, and better—frankly—than I ever thought imaginable, all at once. The moment bathtub gin became Bacardi, or better. The cannabis singularity; cannabis Valhalla. And we’re only getting started.

So with that in mind, it was tough to adjudicate the categories below for the best of Oregon cannabis in 2017. What follows is imperfect, because anyone claiming perfect critical knowledge and recall of our ever-changing cannabis moment is selling you oregano. I hope I’ve been able to smoke, snack, ponder, and parse it all to an eighth of a degree of accuracy. What a wonderful time to be alive and on Team Cannabis.

After a not-inconsiderable amount of hemming and hawing and revisiting a clutch of faves, this is the only place I could land. Farma’s deft trick is not just in its level of curation, though this is a deeply curated dispensary, carefully chosen without being overwhelming. Nor is it just in the staff, who have met my questions and curiosity with what the Irish in a bar setting might call “good banter.” I’m also not calling it the best dispensary solely on aesthetics, though those are there too. There is this canna-wonk, New Modern Science Chill thing happening here that feels democratizing, like it’s a new sort of cannabis culture expression, at once cutting-edge and laid back, like I’m in an AP class for cannabis with the rest of the smart, weird kids. Farma balances all of this, at the same time, in a kind of high wire act that’s impossible to ignore.

Awesome homemade pre-rolls for $4 on Tuesdays! Ounces as low as $150! Friendly staff, deep selection across product categories, take-home seeds, a grip of pre-rolls under $7, and all of it with a charming Astorian vibe. Locals clearly love the spot, but if you’re in town for the weekend, this is your crucial first stop, and out of towners are certainly just as welcome. 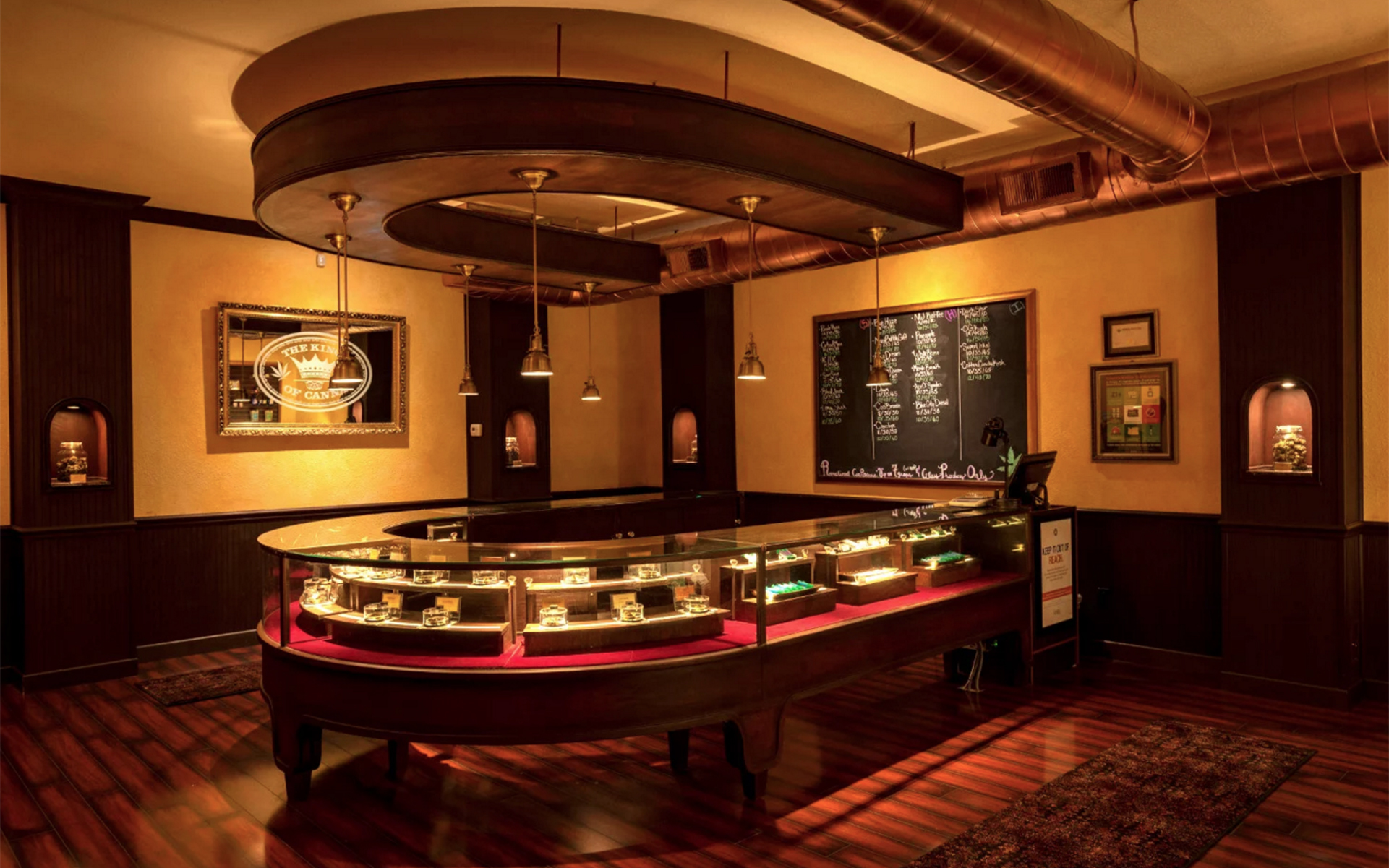 (Courtesy of Kings of Canna)

Since 2015 this has been the Oregon dispensary with the biggest “wow” factor thanks to the space’s transportive, atmospheric approach to interior design and vibe—it feels more like an apothecary or craft cocktail lounge than a dispensary. Nowhere else in Oregon makes the flower look so pretty, each bud framed in a U-shaped vintage optical case that’s just as impressive after several dozen visits. The flower is curated, the budtenders are gregarious, and the lobby has ample reading material and comfy chairs (like a chill little Victorian cannabis antechamber). I’ll drive out of my way to make solo stops or take people here from out of town, even if they don’t like cannabis (yet). There’s something special to the shop.

More than food, and more than wine, cannabis is where the soul of Oregon customer service lives. Tiara Darnell is a consummate budtender and cannabis advocate working at Farma, frequently dropping perfect descriptors, as the following of a CBD strain: “This makes me feel like Me Plus.” And if this sort of insight isn’t enough, she’ll pull out a binder of terpene breakdown information to prove it, then recommend some cannabis-infused orange juice as a perfect accompaniment. 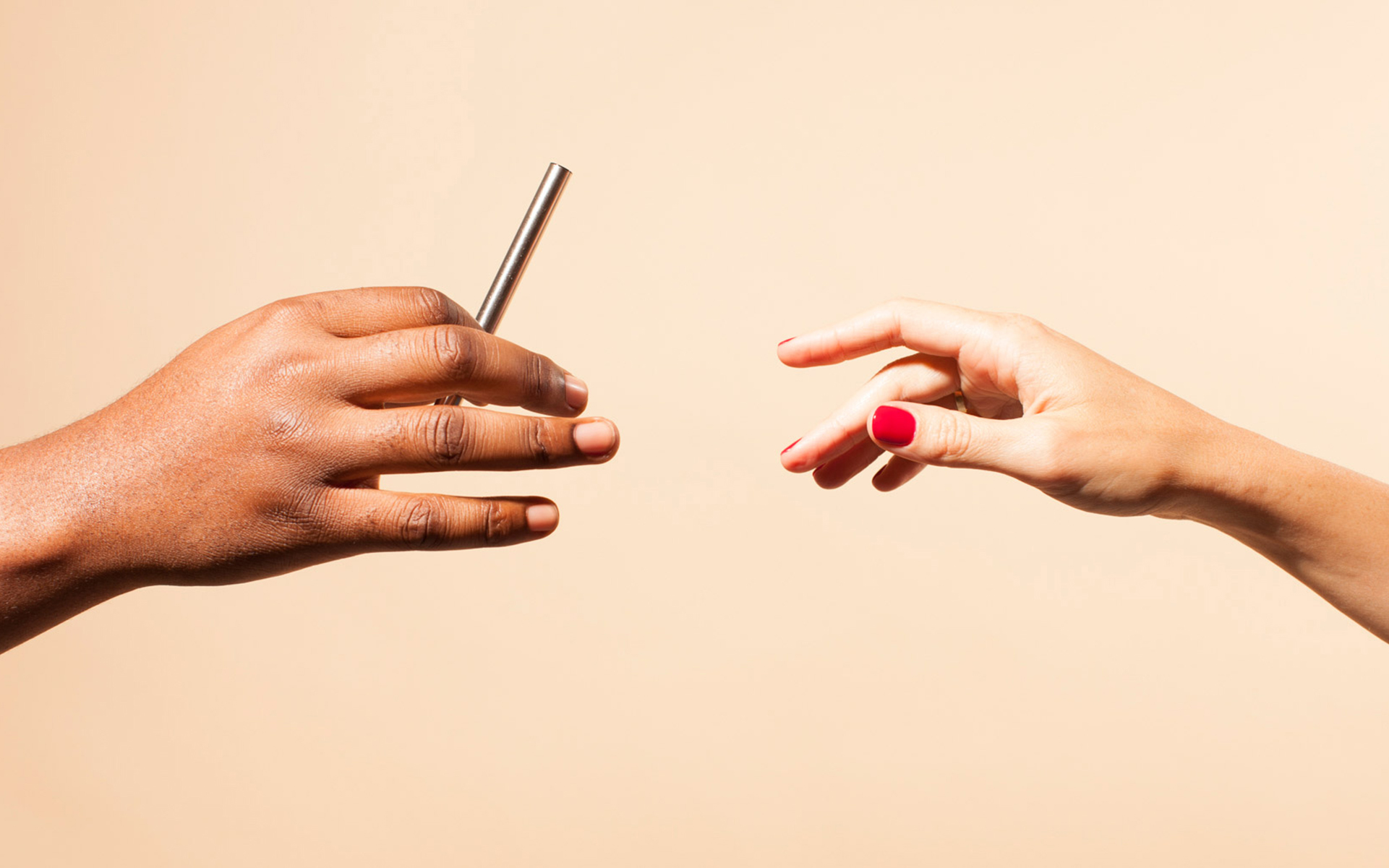 From the people behind OMFGCO/Rare Industries, I think this is the single most transformative product in Oregon cannabis history, a harbinger for a brave new future of casual, perfectly dosed, aesthetically minded cannabis consumers. Tucked away for local travel, brought along for a puff before dinner, and part of the keys-wallet-phone coterie of must-have items grabbed before leaving the house. The future of cannabis doesn’t look like unwieldy dab rigs—it looks like the Quill, which feels beautiful to hold and behold. You wouldn’t know it was cannabis unless someone told you. 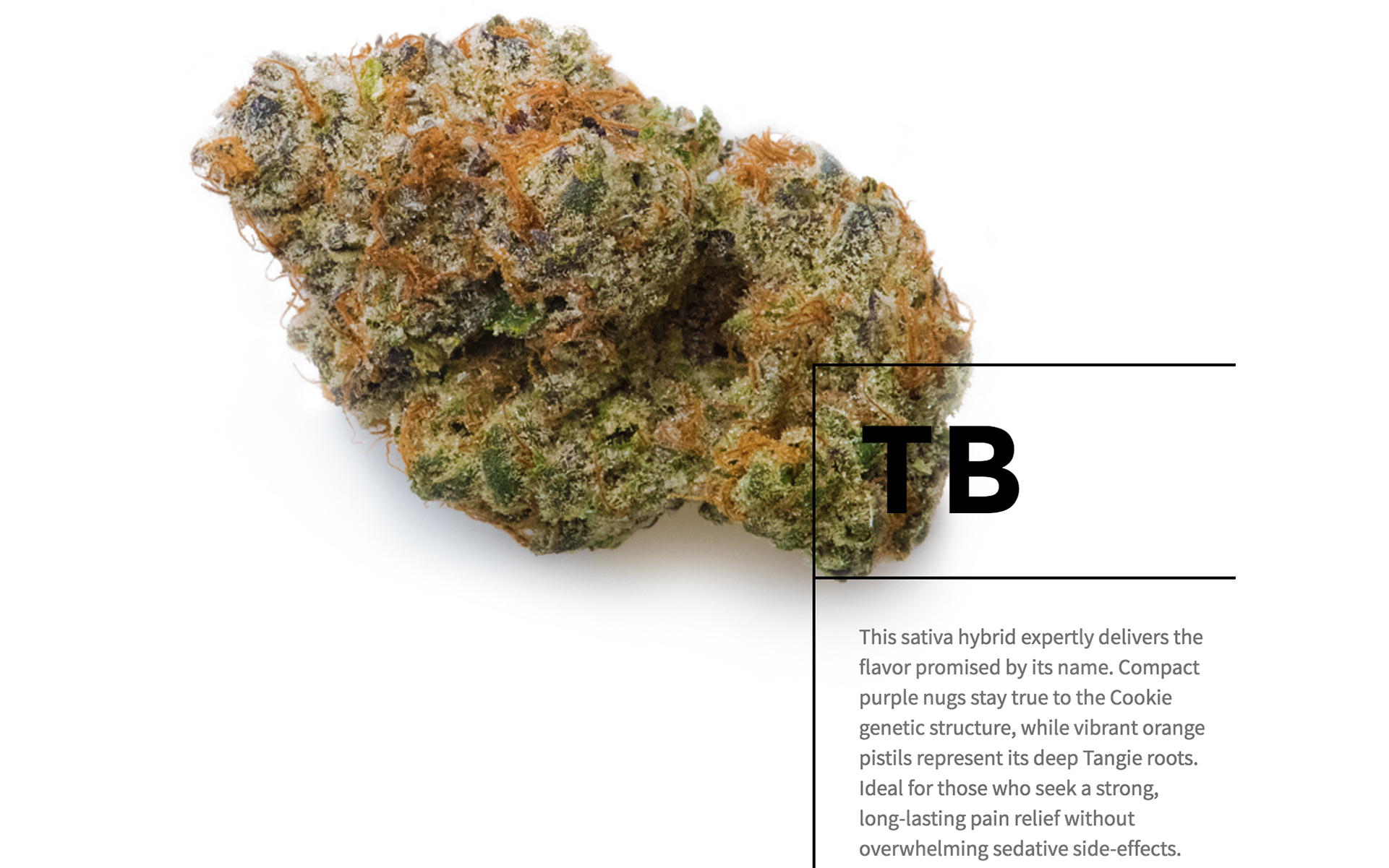 The all-around best cannabis flower I tried this year, by a country mile. Incredible winter fruit aromatics from the Tangie, linked up with the famously euphoric headspace of GSC, resulting in an overall smoke that is soothing yet happily alert. When it comes to the anti-anxiety properties of a given strain, everyone’s experience is difference, but I want to shout it from the rooftops: There’s some magic in this Tangie blend.

A concentrate, edible, and topical—for sheer versatility, there’s no product with more applications than the aptly named Universal Cannabis Topic. Rub a little on one of your sore spots; take a sip of the pleasant blend of organic almond and coconut oil; you can even take it into the bedroom with you later. The “Meadow Blend” is a 1:1 THC:CBD blend, with cannabis sourced from Green Source Gardens and East Fork Cultivars—both family owned and farmed without synthetics.

Mix white chocolate, citrus, and active, uplifting cannabinoids, and you’ve got WYLD’s line of white chocolate edibles, available in 10-pack boxes or single servings. These practically jumped off the dispensary table to me when they debuted, and they’ve proved to provide a perfectly dialed-in combination of flavor, elevation, and energy, and they cost about $5 each (or sometimes as low as $3.50). 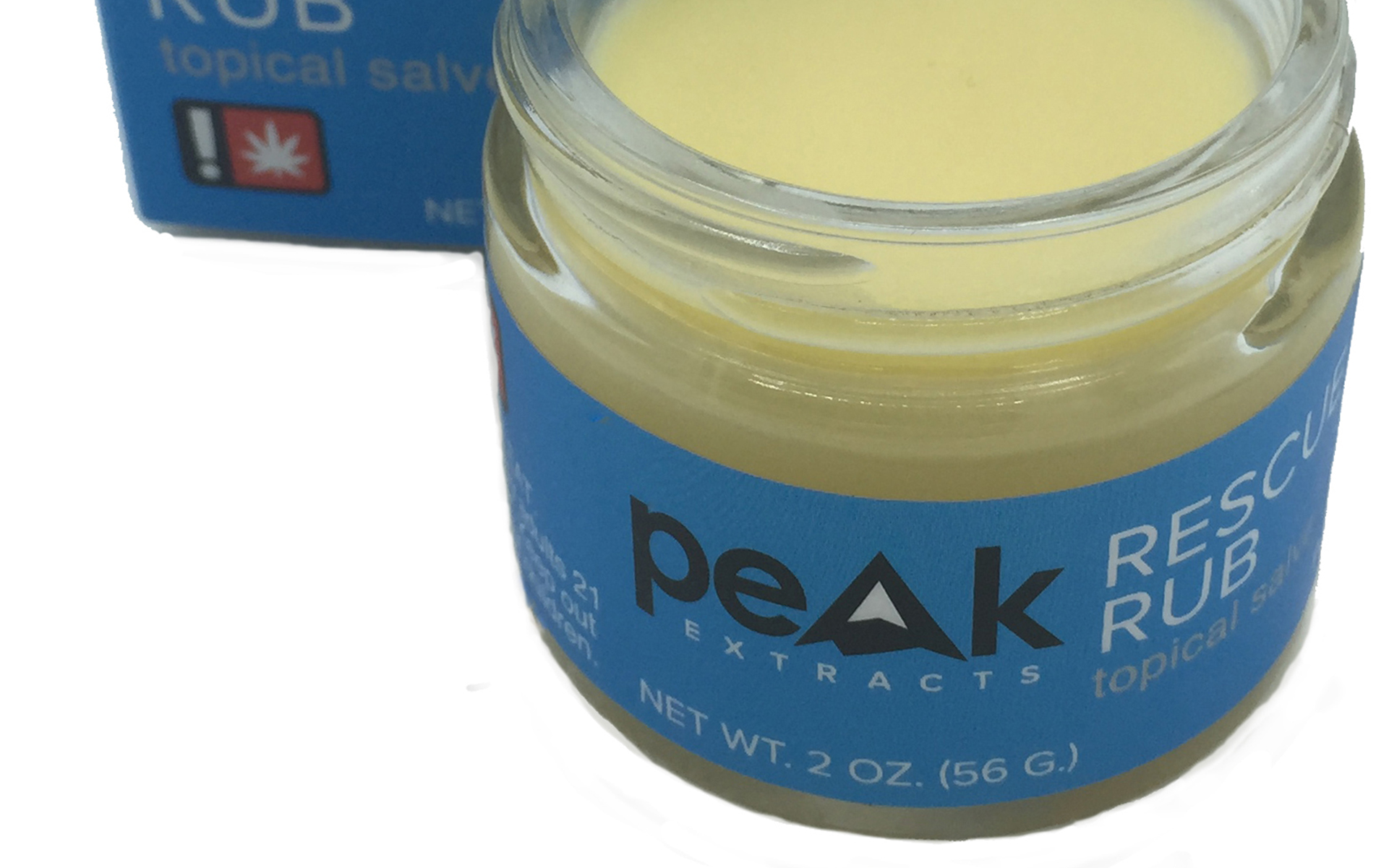 All cannabis is personal. For many, a topical rub is something associated with nostalgia, bringing back childhood memories of VapoRub used to alleviate symptoms of sickness, or Icy-Hot to soothe sore muscles after athletics. Peak Extracts’ Rescue Rub deftly blends CO2-extracted essential oils from a variety of traditional Chinese pain relief herbs with cannabis, and comes on with a subtle tingle that lets you know it’s working. It has quietly become a favorite for cannabis-friendly massage and acupuncture therapists across the state, and while the effects are subtle, the relief is real.

My wife is an infrequent cannabis user, but this is her holy grail: a clean, easy to use CBD pen with noticeable calming effects. She’s not alone in loving this product, either. Select’s pens deliver a microdose of mellow vapor in flavors like lavender, mint, or citrus.

From concept to execution to basking in the afterglow, I’m enormously impressed by the work done this year by EVOLVD out of Eugene, Oregon. They appear to have solved some basic use issues involved in vaping cannabis extracts, rolling out a leak-proof pen-and-cartridge system made of stainless steel. It’s a pleasure to use and won’t get gross in your pocket—this alone would be notable. But they’ve paired that with a range of “strain specific, terpene steeped” extracts in flavors like Tiramisu (a blend of Cookies, Sourdough, and Vanilla Gorilla) that, glory of glories, actually taste good. You know how often the promise of a product can wind up being a load of hooey? This actually is vaping, evolved.

“Old Portland” and “Retro Oregon” are these highly fraught, nostalgia loaded, imperfect concepts. But there are some spaces, some sites that feel trapped in time in the best way. At the Skidmore Bluffs in North Portland, people have been smoking cannabis and watching the sun set for decades. You ride your bike there, or enjoy a long walk, and pack a picnic. The sky changes dramatically over the West Hills and Forest Park over the course of a few hours—prime time is around 7 p.m. on one of those long, hot July nights. Folks bring their dogs and set up picnic blankets; I’m definitely smoking a pre-roll with my friends from Greeley Gallery up the road. There is no rush at all. It’s free to be here and nobody makes you leave. It’s just off the track enough to be gentle, and mellow, and every time you go it’s someone’s first time, and someone else’s hundredth. Here, Portland is old and new all at once.

Oregon has an embarrassment of riches in this category, but when the moon is high and mood is right (and I’m just exactly the right kind of toasted), I want a burger. But not just any burger—a Stoopid Burger, the creation of owners John Hunt and Danny Moore, who earlier this year moved their operation from a food cart on North Williams to a brick and mortar at 23rd and Northeast Glisan. This is arguably Portland’s best cheeseburger and inarguably Portland’s funniest cheeseburger menu, from the standard Stoopid (cheddar, hotlink, ham, egg) to the cult of the Wicked (pineapple mango habanero chutney and peanut butter) to the downright Ignorant Burger ($40, basically the entire kitchen on a bun, including a chicken strip). There are also baskets, fried snacks, a serious club sandwich, and housemade Stoopid Juice (a Kool-Aid riff) to wash it all down. This is serious, playful, deeply satisfying high food—chicken strips for the stoner soul. 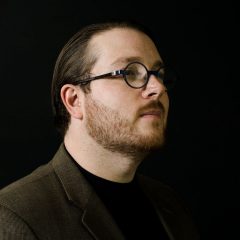 Jordan Michelman is a co-founder and editor at Sprudge, the world’s most popular coffee publication. He writes about natural wine, food, and cannabis for the Willamette Week and lives in Portland, Oregon.