Planning a trip along the Oregon coast? Cannabis isn’t always easy to find out here, but this guide to Oregon’s coastal cannabis dispensaries will make it a breeze. Explore your cannabis options by city or plan your road trip through each city for the full experience.

Driving over the Youngs Bay Bridge where the titular water meets the Columbia River, Astoria comes into view as a series of steep hillsides adorned by the city’s patchwork of buildings: homes, churches, and low-key basics, all rowed and stacked into the many crests and valleys like a heavy, improvised necklace.

Astoria is the old fishing town where the 1980’s cult classic Goonies was filmed, as well as home to the original Bumble Bee Tuna Cannery that’s now occupied by a Rogue Brewery beer attraction—a sudsy eatery overlooking the water where sea lions congregate in the fall and winter months.

The bulk of Astoria’s dispensary action competes for attention on the 101, where the town’s character-building commerce centralizes in a small but charming downtown district composed of numerous beachy restaurants, two junk stores for every dive bar, a cute paper craft shop, and a classic toy store.

It’s hard not to fall in love with Astoria, especially now that it serves as one of the coast’s cannabis hotspots.

At the northernmost outskirts of Astoria’s downtown is The Farmacy, a diminutive shop made contemporary with smart-light accents broadcasted against the walls in LED blues and purples and greens—flat screen televisions backdropping the bud stations with the day’s menu.

Following these contemporary accents are modern, high-demand flower options from sought-after Oregon growers, including the blissful Zkittlez from Pistil Point and the fuel-strain perfection that is Mindful Organic’s OG Kush x GSC.

Despite these tempting top-shelf standouts, I walked away with Farmacy’s budget option: the exotic, menthol-and-licorice-scented Black Lime Reserve, grown in full sun by Dicot Farm ($6/gram)—and I didn’t regret it one bit.

The Farmacy also grows their own line of flower—on-site and viewable to customers via a dedicated grid of security feeds. Unfortunately, these house options were sold out when I visited, but I suspect they’ll be worth checking in on in the future.

Five Zero Trees offers one of the more comprehensive stables of edibles and concentrates in Astoria, as well as industry-leading clones from Archive and a flower selection primarily sourced from the shop’s vertically-integrated sister farm, Pudding River.

I’ve come to appreciate Pudding River for their dedication to lesser-known, heritage cannabis genetics, like the PNW Dog Shit, as well as experimental strains such as the Trainwreck OG—an accurate, 50/50 representation of the parents that incorporates the OG’s flavor notes and the Trainwreck’s day-changing mood elevation.

Apart from the quality house flowers, Five Zero Trees has a huge selection of edibles, spanning infused granolas, weedy shots and sodas, an expansive line of cookies, as well as the more widely available Wyld gummies and the vacation-friendly mints from Moxey.

Up the road from Five Zero Trees is Sweet Relief, a locally-owned shop that focuses on bringing to market reasonably priced, quality flower options.

Coastally grown options include trusted personal favorites like the Chocolate Mint OG from Bandon-based Truly Organics and some excellent indoor options from Jewell-based Greenworks—a sleeper farm I hadn’t previously encountered, whose UK Cheese was an unexpected highlight of my trip.

Like the Farmacy, Sweet Relief will be rolling out a line of house flowers in the coming months—proprietary strains to be grown in nearby Warrenton (adding some renewable income to the local economy) once the Oregon Liquor Control Commission approves their license. If you want your cannabis money to stay on the coast, Sweet Relief is a great option.

South of downtown on the 101 is Hashstoria, and as the name suggests, they’ve got you covered if you’re in the market for concentrates.

Mid-priced shatters from White Label Extracts and Willamette Valley Alchemy are filled out by budget-focused options from Tree Honey ($12.50/gram), as well as Winberry’s pricier but very worthwhile line of Proto-S, flavor-forward distillate shatters, including their best-in-class Tropical Trainwreck and Raspberry Sky.

And while Hashstoria confidently puts their hash where their name is, I was also impressed by their flower menu, which dares to take chances on lesser-known strains and uncommon terpene expressions, while padding out these adventurous flowers with an array of crowd pleasers.

When I stopped by, four variations on the Oregon Indigo from Geek Farms were available for curious connoisseurs, alongside Oregon’s favorite citrus strain, Tangie Biscotti by Prūf Cultivar, plus options from the always-great Yerba Buena and Left Coast Farms. 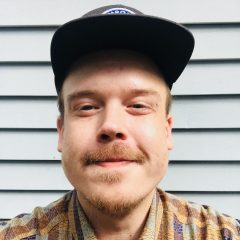