The last several decades of cannabis breeding generated thousands upon thousands of strains, many with high levels of THC. This begs the question, “Which strain has the most THC?”

The answer, according to numbers pulled from Washington state’s I-502 data, might be Ghost OG. (Leafly filtered the data to remove suspicious outliers and avoid labs that may have inflated THC values.)

Ghost OG is a hybrid strain with a mysterious origin story likely written only on the ancient walls of an online growing forum. However, it’s said to be a cut of the original OG Kush passed along from one breeder, ORGNKID, to another named “Ghost.”

While its history is known by few, the name is known by many, preserved by a reputation built on numerous Cannabis Cup awards. Wearing a thick white sheet of crystal trichomes, Ghost OG can produce a predatory amount of resin best reserved for fearless cannabis heavyweights. Skillful gardeners can coerce loud aromas from this strain that reek of acrid lemon-pine cleaner and deep earthy goodness. Coveted Ghost OG genetics have been used to breed several other strain staples like Ghost Train Haze, Rare Dankness #1, and Banana Kush.

What Are You Smoking? Episode 12: Josh D and the Real OG Kush Story

How Much THC Does Ghost OG Have?

Advances in cannabis lab testing have helped to put the terms like “strength” and “potency” in quantifiable terms—a percentage point that many consumers now primarily look to when choosing a strain. Though we now know that a strain’s subjective intensity is determined by a harmony of cannabinoids and terpenes, many people primarily focus on the THC content if looking for a powerful cannabis experience.

Through genetic selection and advancements in growing technology, cannabis plants can now produce over 25% THC by dry weight—a substantial increase from the single-digit figures strains touted in decades past. 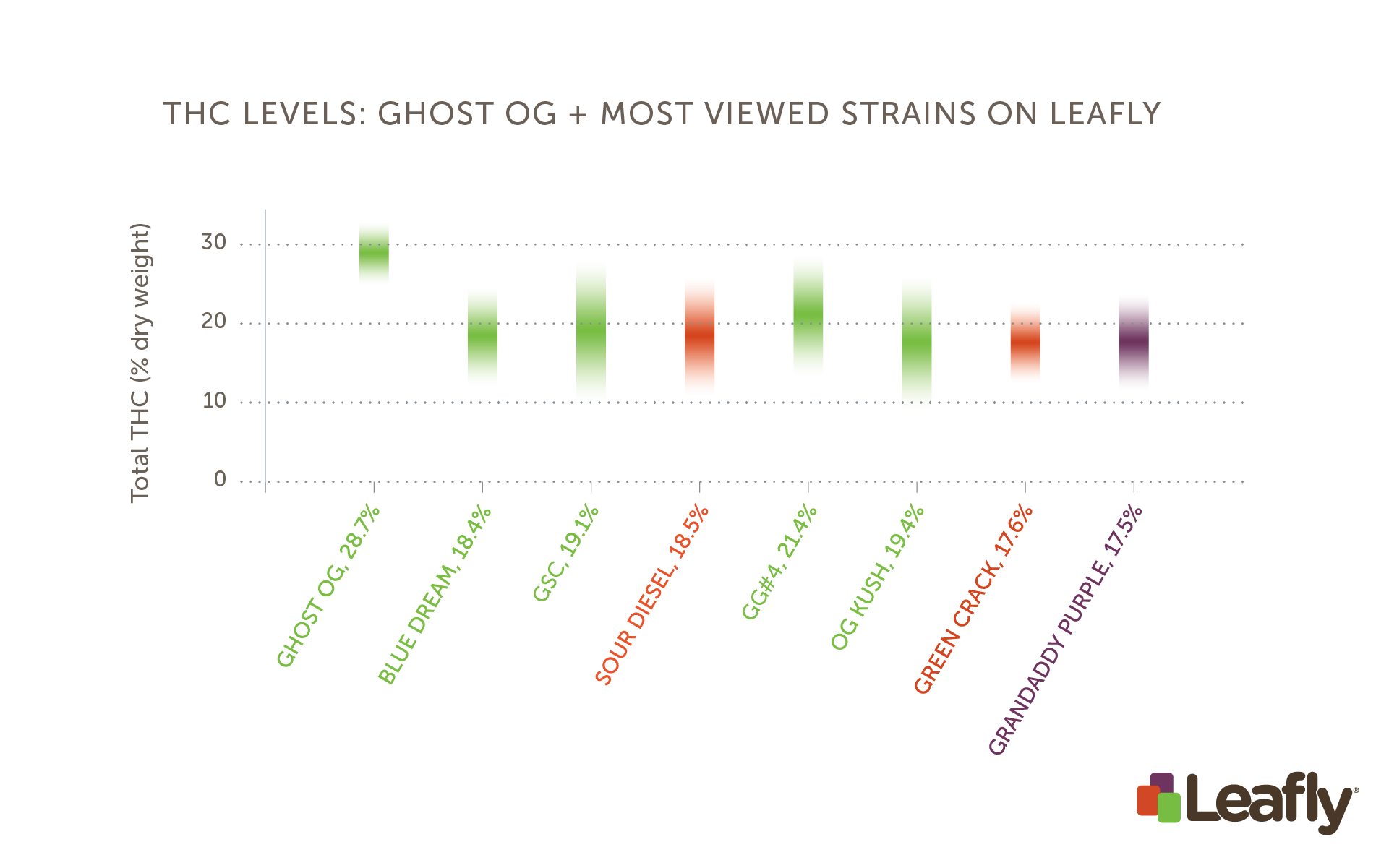 If cut from the original OG Kush mother stock, why is Ghost OG’s average THC percentage so much higher? Could it be that these prized Ghost genetics fell into the hands of particularly talented propagators and cultivators, while the potency score of the widely proliferated “generic” OG Kush was skewed by more lackluster samples? 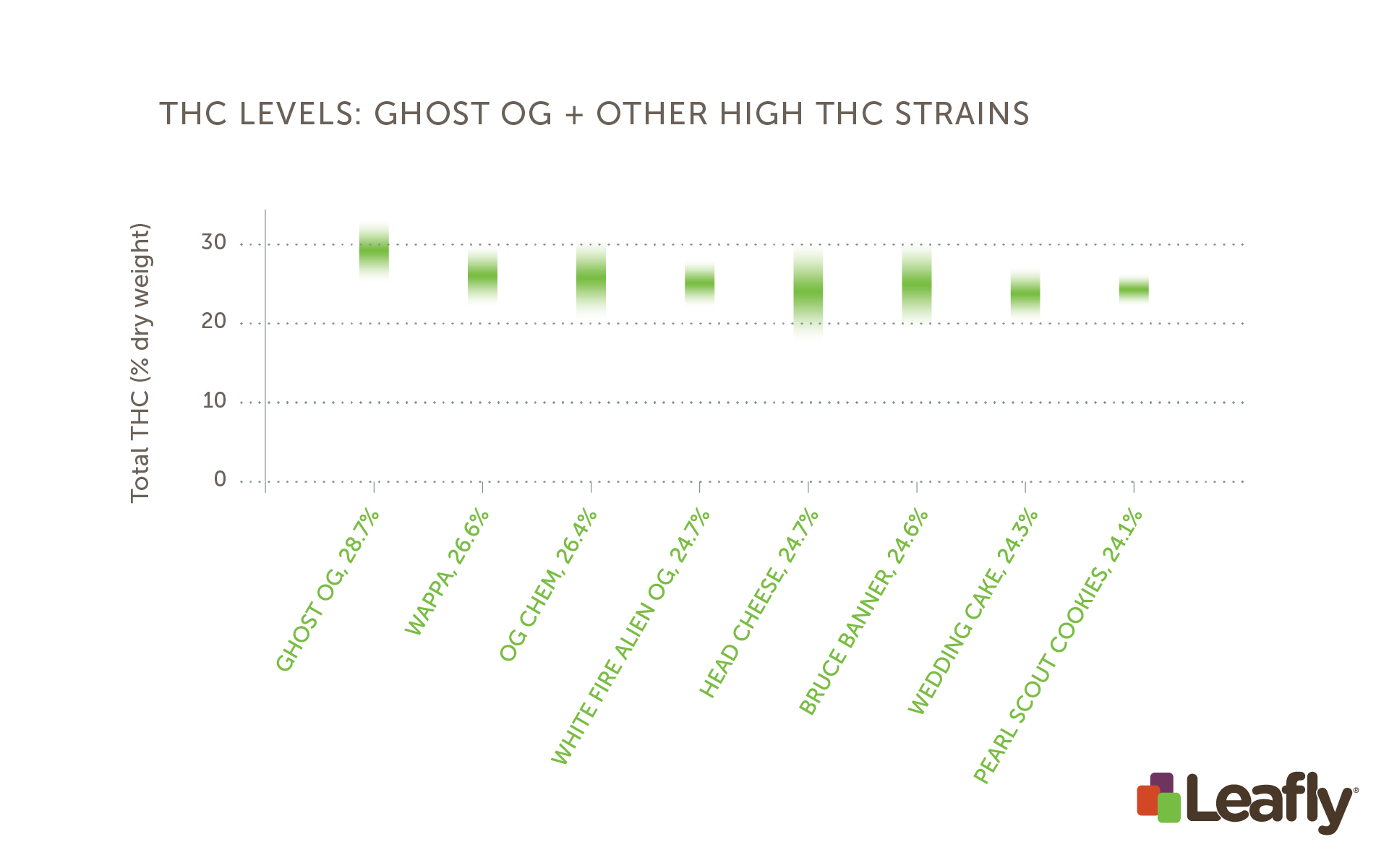 Many of these runner-ups are cut from the same genetic cloth as Ghost OG with deep OG ancestry, but somewhere along the way, Ghost OG held its edge.

But I’ve Seen Plenty of Flower With More THC. What Gives?

It’s plausible you’ve come across strains that exceed the 28% THC benchmark. Given these figures are an average of measured THC profiles, it makes sense that you’d find individual samples on either end of the high-low spectrum.

Consider also the credibility of cannabis testing labs and the possibility of THC inflation. Earlier this year in Washington state, for example, some labs were suspected of artificially inflating THC profiles to make clients’ samples appear more potent, perhaps to give them a competitive edge over other labs. Again, the dataset used here excludes questionable data sources.

Keep in mind the biological limits of THC production. This chemical ceiling rests somewhere around 30% or so THC by dry weight, and if you see any strains pushing far past that, you have every reason to be skeptical.

The question of which strain packs the most THC in a single flower will almost certainly be a matter of ongoing debate as more data is collected and assessed. For now, it’s clear that Ghost OG stands out among the resin-packed queens of 2017, but which varieties will ascend to the throne next?